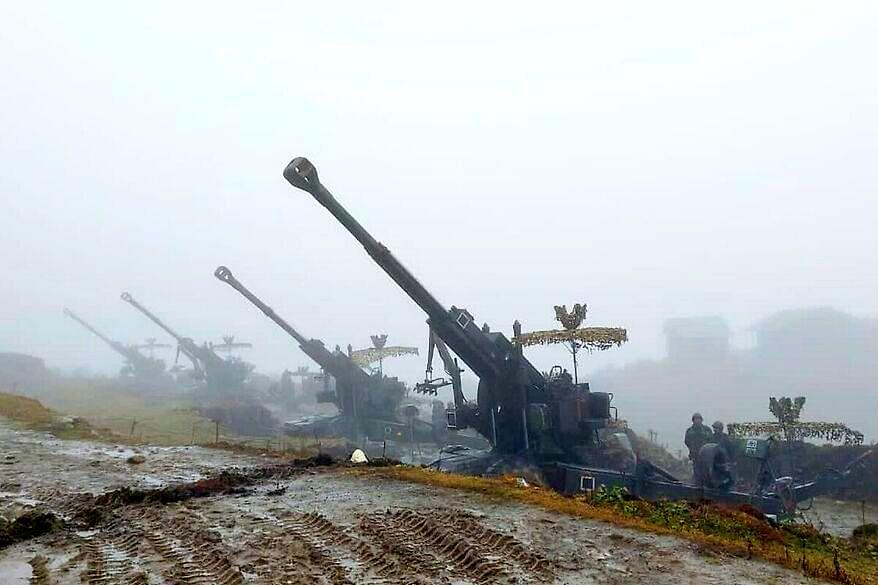 Artillery guns in the eastern sector.

Amid tensions with China along the Line of Actual Control (LAC), the Indian Amry has significantly increased its firepower in the eastern sector.

Of the three regiments (18 guns make a regiment) of M777 ultra-light howitzers of US-origin that India has deployed along the LAC, some have gone to the eastern sector. The deployment of these guns, which can be airlifted from one valley to another using Indian Air Force's Chinook heavy-lift helicopters, have augmented the army's firepower significantly.

Training is “going on in moving guns [M777 howitzers] from one sector to another with the Chinook helicopters," Lieutenant General T K Chawla, Director General Artillery, had said at a press conference on 27 September, a day ahead of the Gunners’ Day this year.

“As the BRO [Border Roads Organisation] further takes the road network to forward areas, we will be able to deploy our guns in more locations,” Lieutenant General Chawla said at the presser.

India had signed a deal with the US in 2016 for 145 M777 howitzers. Under the deal worth $737 million (Rs 5,000 crore), 25 guns were to be delivered by manufacturer BAE Systems while the remaining 120 were to be assembled in India by Mahindra Defence in Faridabad, Haryana. Almost half of the 145 guns contracted for have been delivered.

The army already had battle-proven Bofors artillery guns in the sector. The guns have been upgraded in recent years to improve their performance and increase their operational life.

Apart from the M777s, India has also deployed upgraded L-70 air defence guns to deal with drones and other airborne threats. The legacy Swedish-origin L-70 guns, which were first bought by India in the 1960s and then produced under licence in the country by the Ordnance Factory Board, have been upgraded with an electro-optical fire control system, a video tracking system, a new air defence radar and an electrical servo drive.

News reports say the upgraded L-70 guns were positioned in forward areas by the Indian Army around two months ago.

"The guns can bring down all unmanned aerial vehicles, unmanned combat aerial vehicles, attack helicopters and modern aircraft. The gun has enhanced target acquisition and automatic target tracking capability under all weather conditions with high-resolution electro-optical sensors comprising a daylight television camera, a thermal imaging camera and a laser-range finder," Captain Sariya Abbasi of the Army Air Defence told journalists during a demonstration in an area close to the LAC.

Indigenously-developed Pinaka multi-barrel rocket launchers (MBRLs), along with the older Smerch MBRLs of Soviet-origin, have also been deployed by the Indian Army in the eastern sector.

"The Smerch launcher is a very potent weapon in the arsenal of the Indian artillery. It can fire up to the range of 90 kilometer. It can fire 12 rockets in 40 seconds," another army officer added.

According to Hindustan Aeronautics Limited (HAL), its maker, Rudra helicopters can be used in anti-tank, scout, fire support, armed reconnaissance and surveillance and escort roles. The helicopter is "ideal for operations from unprepared surfaces and slopes," HAL says.

These developments come at a time when the People's Liberation Army (PLA) has deployed over 100 long-range PCL-181 light, truck-mounted howitzers along the frontier with India.

A report in the South China Morning Post says the deployment of PCL-181 howitzers has been done in response to India's deployment of three regiments of M777 ultra-light howitzers in the region.

PCL-181 is a 155 mm wheeled self-propelled howitzer developed by the China North Industries Group Corporation or Norinco. The gun weighs only 25 tonnes, which makes its transportation easy.