Malabar Naval Exercise: A Show Of Strength In The Bay Of Bengal 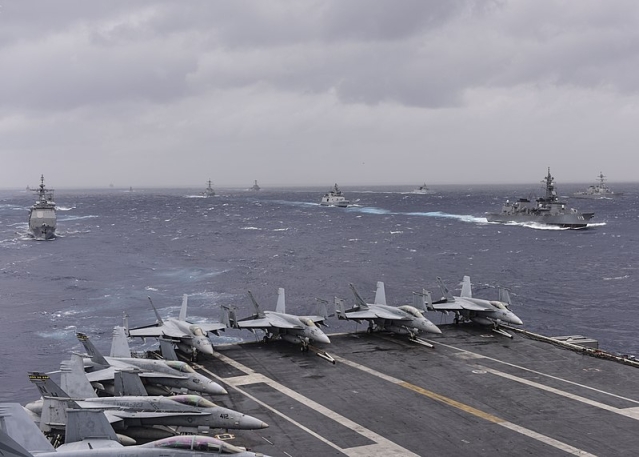 Ships from the Indian, Japan and the US navies sail in formation in the Bay of Bengal during exercise Malabar 2017. (Wikimedia Commons)

The Malabar naval exercise was started initially as a bilateral naval drill between the Indian and the United States navies. However, as relations between India and Japan strengthened, Japan became a permanent member of the Malabar exercise in 2015. The Japan Maritime Self Defence Force participates in this now trilateral exercise along with the Indian and the US navies – a strategic operation aimed at China.

This year too, the navies of the three countries participated in the exercise. The exercise showcased the Indian Navy’s aircraft carrier, INS Vikramaditya with its air wing, the US Navy’s Nimitz-class carrier with its air wing, and Japan’s helicopter carrier, the JS Izumo. Amongst missile destroyers, India’s Ranvir class destroyer, US’ Arleigh Burke-class destroyers, and Japan’s JS Sazanami, participated.

In the submarine category, a Russian-made Sindhughosh-class submarine of the Indian Navy and a Los Angeles-class attack submarine of the US Navy took part in the drill. The Indian Navy’s stealth frigates Shivalik and Sahyadri were also part of the exercise. Among long range maritime patrol aircraft, the Indian Navy’s US made patrol aircraft P8I and US Navy’s P-8A figured in the exercise. India’s anti-submarine warfare corvette Kamorta and missile corvettes Kora and Kirpan as well as fleet tanker INS Jyoti participated. While the US Navy fielded its Ticonderoga-class cruiser Princeton, SH-60K helicopters represented the Japanese Navy.

The naval exercise is significant as none of the three countries that participated in the exercise share cordial relations with China. Japan and India are entangled in territorial disputes with China. In addition, China’s military, defence and nuclear cooperation with Pakistan while its silence over the North Korean nuclear crisis, has been a worrisome factor for both India and Japan respectively. The US too is dissatisfied with China’s soft approach towards North Korea.

Therefore, the maritime exercise between US, Japan and India is a strategic signal aimed at China. India is a reliable partner for the US to counter China in the Indian Ocean Region (IOR). India is also aware that it would require a strong naval power presence in the IOR to counter China, and the US is the country to rely on. Russia’s interest at the moment is in the European region and hence, not the right option for India. Moreover, both the US and India also have aspirations in the South China Sea, and are embroiled in disputes with China over there too. So bilateral cooperation between both the countries can ensure peace and stability in the South China Sea.

The trilateral naval exercise to enhance maritime cooperation between the three states was conducted in the Bay of Bengal, which is of strategic importance to India. The region would also host India’s counter strike/second strike capability – the sea based nuclear deterrence.

The Indian Navy has increased its presence in the IOR in recent times, and there is a reason for this. Presently, 95 per cent of India’s trade by volume and 68 per cent by value come via the Indian Ocean. India imports 3.28 million barrels of crude oil per day via the Indian Ocean. India’s dependence on sea for oil is about 93 per cent. Not only this, 45 per cent of India’s liquefied natural gas (LNG) comes by sea. The Indian Navy would play a crucial role in protecting India’s energy requirements.

The Indian Navy aspires to build its ‘blue water capability’ as stated in the maritime doctrine of 2015 with an aim to strengthen influence in the Bay of Bengal, Arabian Sea, Persian Gulf, Gulf of Oman, Gulf of Aden, Red Sea and also strategic points like the Strait of Hormuz. The Indian Navy in recent times has been also increasing its presence in the Malacca Strait that is closer to the Andaman and Nicobar Islands. As stated by the Indian Navy Chief Sunil Lanba,: “[t]he Indian Navy needs to expand its footprint to be a stabilising force in the IOR.”

Japan on the other hand, has involved in renovation and construction of eight major ports in the IOR. There is a remarkable increase in its foreign direct investment (FDI) in the IOR, which would serve as a medium to counter Chinese influence in the region. Japan is also keen to build defence cooperation with IOR countries. In 2016, there were also reports that India and Japan showed interest to create connectivity from the Pacific to the Indian Ocean. To achieve all this, Japan needs to possess naval prowess in the IOR. Japan’s sea lanes of supply in the South China Sea would be disturbed by Chinese naval presence and hence, Japanese maritime presence in the IOR would redress this weakness by “placing for the first time, Chinese sea lanes of supply under threat from independent Japanese maritime action.”