Nirbhay Failure: Why It’s Important For The Government To Support The Cruise Missile Project 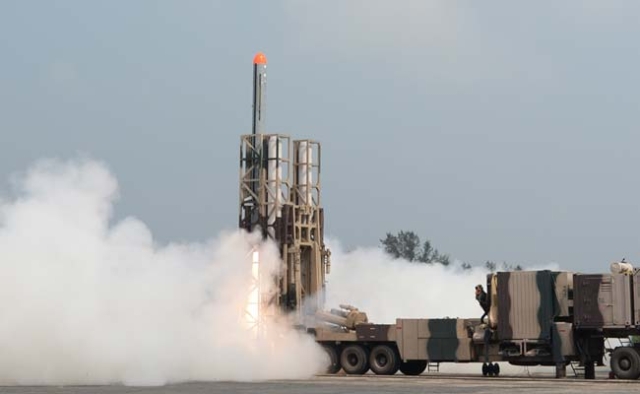 Nirbhay missile at the Integrated Test Range at Chandipur. (DRDO)

The fourth test of the Nirbhay cruise missile, conducted on 21 December 2016, ended in yet another failure, the third in a total of four tests. This must undoubtedly be demoralising to the team of Aeronautical Development Establishment (ADE) scientists, who worked on the project and represents something of a blot on the agency’s record as in missile development. Moreover, it is an unfortunate fact of Indian defence reporting that rather than any analysis or nuance in coverage, there will be an outbreak of “DRDO-bashing” (ADE being a Defence Research and Development Organisation (DRDO) establishment) and much uninformed speculation. While criticism is necessary, and introspection and review desperately needed, any orgy of self-flagellation will be completely counterproductive.

At the outset, it is pertinent to consider what the Nirbhay is supposed to be. It is India’s first strategic cruise missile with a range exceeding 1,000km with a speed of between 0.8 and 0.9 Mach (speed of sound) with a launch weight of 1,500kg and a length of 6 meters. The payload size of the missile is not yet known but there is speculation that it would be capable of carrying either conventional or nuclear warheads of 24 different types. It is intended to fly at very low altitudes of 20 meters or less to evade radar detection, using a terrain-following function, which enables it to use mapped contours of the ground for both concealment and updating its inertial navigation system.

In contrast to ballistic missiles, cruise missiles can be cheaper, are much slower and use a different flight path entirely. They are also more flexible as, in the South Asian context, ballistic missiles are inextricably linked to nuclear weapons and as such cruise missiles attract much less attention, making them useable weapons for the delivery of conventional warheads while retaining the ability to carry a nuclear payload.

Compared to the Brahmos missile already in service, the Nirbhay is longer-ranged (1,000 km+ vs 290km) but slower and the Brahmos is considerably longer (8.4 meters) and heavier (3,000kg). However, while the Brahmos is intended to cruise at higher altitudes and then complete its terminal run to target at a very low altitude of 10-15 meters, the Nirbhay can complete much of its flight at these lower altitudes. The Nirbhay also has the ability to loiter and to pick out and engage a specific target in a multiple target environment. In addition, it is very unlikely that the Brahmos has, at this stage, any ability to carry a nuclear warhead – its manufacturers specify a conventional payload only – although there has been some informed comment to the contrary.

The Nirbhay has been tested four times to date with three tests being failures and other being termed either a partial or complete success depending on which report is read:

On 12 March 2013 when the missile took off from the launch pad successfully and reached the second stage of propulsion, travelling 15 minutes along its predicted path, covering 30 per cent of its intended 1,000 km at a speed of 0.7 Mach. It then veered away from its trajectory forcing the missile to be destroyed in mid-flight. On this occasion, it was suggested that the fault was a defect in the inertial navigation system.

On 17 October 2014, the second test of the missile was much more successful. All the test parameters were purportedly met and the missile completed all 15 way-points. The missile covered a distance of more than 1,000 km in a flight that lasted for over 1 hour and 10 minutes. It is to be noted, though that the missile did not manoeuver as desired at low altitude. While the missile test was, therefore largely successful, it was not an unqualified success and should have raised questions about the missile’s low-altitude performance.

The third test of the missile took place on 16 October 2015. The missile was to be tested for its low flying capability being brought down from 4,800 meters to 20 meters gradually and in stages. All initial critical operations such as booster ignition, booster separation, wing deployment and engine start were successfully executed and Nirbhay reached the desired cruise altitude. However, 11 minutes into the flight, after covering only 128km, the missile crashed into the Bay of Bengal.

The fourth test of the missile took place on 21 December 2016. The once again, there was a successful booster ignition and launch. Less than four minutes after lift-off, the missile veered off its intended trajectory and outside the safety zone, leading to it being destroyed in flight. Initial reports suggest the flight control hardware and software failed to actuate the missile control services and that the engine lost thrust two minutes after take-off.

With only one test in four being anywhere close to successful, the Nirbhay project has been one of the least successful of DRDO’s missile programmes. In part, this may be because it was handled by the ADE, which has only had limited experience in developing Unmanned Aerial Vehicles (UAVs), besides its experience in supporting the Tejas programme. A cruise missile project represents a quantum leap in technology and a very steep learning curve for a laboratory that has thus far produced only a few UAV designs.

In light of this, the most disturbing aspect in the lead-up to the fourth test of the Nirbhay were informed reports – spearheaded by some excellent reporting by Hemant Kumar Rout of The New Indian Express – suggesting that problems with the flight control and navigation software had not been adequately rectified prior to the test with the software designers advising against the test. Moreover, quality control issues need to be examined as two user trials of the Agni-2 failed not for any defect in design but due to component failure and this is one aspect, which could have contributed to the failure of the fourth test. It was also reported that there were issues with the fuel tank not having cleared environment stress screening tests. If this is so, the scientists who assured the government of a successful test should be called to account. Indeed, after the third test, a team headed by the National Aerospace Laboratories director, Shyam Chetty, had recommended further testing only after all defects and snags were rectified.

Where does this leave the Nirbhay project? At the outset, any suggestion that the project should be wound-up or cancelled is nonsensical. Failures will be part of any programme. What is unfortunate is that a dynamic trial was undertaken without rectifying defects from the previous one. The ADE Nirbhay project team must not be rushed into premature testing of the missile and should be encouraged to resist any pressure to do so. This project is about mastering cruise missile technology as much as it is about delivering a useable weapon to the armed forces. To this end, it behooves the government and the military to support the Nirbhay project even if it is delayed.