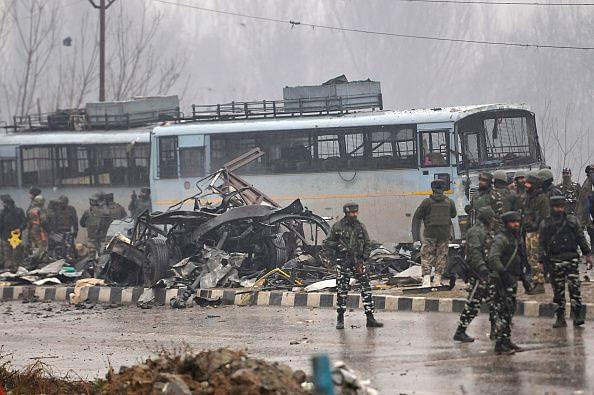 The suicide bombing of the CRPF convoy near Pulwama on the National Highway connecting the Kashmir valley with rest of India is arguably the single worst jihadist terror attack targeting Indian security forces. At the time of writing this piece, details about the attack are still sketchy. The explosives used, the network of the Pakistani terrorist group Jaish-e-Muhammad (JeM) responsible, the security lapses, whether it was planned or random are still unknown.

Initial reports suggest that over 300 Kg explosive was rigged on to a vehicle that was blown next to a bus carrying CRPF personnel. If this is true, then chances are that it wasn’t RDX or any other such explosive, but an Improvised Explosive Device (IED) made of materials of daily use like fertiliser which is difficult to trace. If so, then the implications of this attack are huge as it suggests a capability that is difficult to contain. Asides of the explosive used, such an attack couldn’t have taken place without the involvement of at least half a dozen people. Someone has to arrange the explosive, another person builds the vehicle-borne IED (VBIED), someone else arranges the money, someone does the recce and gathers information about the target (which could mean an insider if this wasn’t a random attack, which seems unlikely). Other people will be involved in priming the bomber and keeping him motivated. There has to be someone who organises the place where the bomb is assembled and puts together other elements of the plot to operationalise the plan.

Normally, the more the number of people the greater the chance of the attack being pre-empted because of information being leaked inadvertently. That this hasn’t happened means a major intelligence failure, but also that the cell responsible for the attack is very professional and proficient in carrying out its grisly task. And worst of all, it is a cell which is still out there and could launch other attacks if not apprehended soon.

As the investigation unfolds some of these details will come to light. Even so, what is known at this stage is also enough to make a somewhat dire assessment of what this attack means for Kashmir, for India and the region.

In many ways, some of the worst fears of the security forces have come true. The Pulwama attack is the first suicide bombing in decades in Kashmir. The last suicide attack was also by the JeM nearly two decades ago when a teenager blew the explosives laden car he was driving just outside the main gate of the Badami Bagh Cantonment in Srinagar. Until the Pulwama attack, there have been what can be called suicidal missions but not suicide bombings. The Lashkar-e-Taiba/Jamaatud Dawa (LeT/JuD) specialises in suicide missions (aka fidayeen attacks) in which the terrorists knew the chances of surviving were negligible, but they were technically not suicide attacks. Suicide bombings are different because in these attacks the terrorist knows he is a human bomb and certain to die. The JeM and other Deobandi terrorist groups specialise in this form of terrorism.

The big question is whether the first salvo has been fired in what could be the beginning of a new phase of terrorism in Kashmir in which suicide bombings becomes the new normal. This is something that will only become clear over time. What is surprising, however, is not that such a bombing has taken place but that it has taken so long for such an attack to happen. Some analysts have been warning about such attacks in Kashmir. The reasons that led to such a suicide bombing were quite simple.

First, the JeM has started becoming active in Kashmir over the last few years. The Pakistani handlers of the JeM had revived the organisation as part of its sinister plan to revitalise jihad in Kashmir. This shift in favour of the JeM was partly prompted by the need to make the LeT/JuD take a bit of a back seat in Kashmir because of the heat that was on the organisation. From around 2012-13, a concerted effort was being made in Pakistan to drive a wedge between the predominantly Pashtun Tehrik-e-Taliban Pakistan (TTP) and the Punjabi Taliban. It was around this time that Masood Azhar, the chief of JeM had once again become visibly active. The JeM, it was rumoured at the time, would redirect the Punjabi Taliban lot to Kashmir where the rumblings had started of a new wave of terrorism. Given the JeM and Deobandi terror groups expertise in suicide bombing, it was only to be expected that this tactic would sooner or later be deployed in the Valley.

Second, jihadist groups learn from the experience of other groups. With IEDs and suicide attacks being the most lethal weapon in the arsenal of jihadist terror groups in Afghanistan, Iraq, Syria and other parts of the Islamic world, it was only a matter of time before this would be used in Kashmir where the new jihadists and militants, like their predecessors, derive inspiration from and imbibe the tactics of jihadists fighting in far-away lands.

Third, and perhaps most importantly, the new militants in Kashmir are part of a sort of jihadist death cult. They were ripe for the picking for experienced indoctrinators to become human bombs. There is enough reportage from Kashmir that speaks of ‘fearlessness’ of the youth who crave for death, who dare the security forces by baring their chests and invite them to fire at them, openly and fearlessly provoking law enforcement. It doesn’t take much to convince these groups to attain ‘martyrdom’ by becoming human bombs.

Finally, there is increasing evidence that there is social sanction for youth sacrificing themselves for the ‘cause’ (or what a turncoat former civil servant euphemistically calls, the ‘sentiment’), including from families, especially mothers. There are parents who encourage their kids to die because they think their kids ‘martyrdom’ will win a place in heaven for them. Such demonic mindsets of fathers and mothers who are too cowardly to put themselves in the line of fire but are ready to allow their kids to be consumed by jihadism are also responsible for the alarming deterioration of the situation in Kashmir. Stoking these fires are the agent provocateurs from Pakistan.

The suicide attack was therefore waiting to happen. While some reports claim that Pulwama was a revenge attack for the elimination by security forces of nephews of the JeM chief in Kashmir, we would be remiss if we think this was a one-off attack. Chances are that the scale of destruction will actually act as an inspiration for other such attacks, more so in the coming weeks when the security forces will be stretched to the limit because of the General Elections.

It is of course entirely possible that the general elections might be postponed in the Valley because of the uncertain security situation. After all, the Pulwama attack would have instilled enormous dread in candidates who will be at their most vulnerable at the hustings when they have to pump flesh and come into close contact with their voters. The fear of targeted suicide attacks against politicians – Pakistani terrorist groups have perfected this art to intimidate candidates and voters and tilt the election results in a particular direction – will make the entire democratic exercise infructuous and therefore it is best postponed until security can be ensured to not just the candidates and the electorate, but also the security detail.

Even if the Election Commission and government decide to bite the bullet and go ahead with the Lok Sabha polls according to the schedule, it would be surprising if the assembly elections were to now be held with the General Elections. Unless the security situation improves dramatically in the next few weeks – quite unlikely – the odds are that President’s Rule will be extended for at least another six months. The security forces would prefer this because if a sweeping clean-up operation has to be launched in Kashmir, it will be impossible to do so under a political government given the proclivities of the Kashmiri politicians to play on both sides of the wicket i.e. pander to and appease the separatist/jihadist element, while at the same time swear fealty to the Indian state. Already, we have seen the so-called mainstream politicians like Mehbooba Mufti reach out to separatists and terrorists families to cement her vote bank. Other politicians are also playing similar games. To expect that these characters will double down on security forces operations, which are likely to gather steam after the Pulwama attack, is quite a stretch.

As far as the Union Government is concerned, it will not have much wriggle room to avoid taking action, not just internally against terrorist modules but also across the Line of Control, against the masterminds and handlers of the terrorists. It will have to be seen to be doing something. The gloves will therefore have to start coming off and some of the extreme restraint that security forces have been displaying in the past few months will start wearing thin.

This means not just more kinetic actions against terrorists, and more muscular policy against overground workers of the underground, but also a revival of strict Standard Operating Procedures (SOPs) on troop movements and deployments. This will again not be a very popular thing in Kashmir. But since neither the security forces will be vying for votes, nor does the ruling party in the centre have any major political stake in the Valley, they won’t worry too much about losing popularity, something that a local political party will not be able to ignore. So, even though there will be the usual howls of protest by the usual suspects, given the ugly mood in the country and the political and security compulsions confronting the Union Government, there won’t be many ears listening to the carping sounds emanating from the Valley.

Clearly, Kashmir is now in a downward spiral. Things are going to get worse before they get any better. If the Union Government is smart (a big if) it can use this enormous setback as an opportunity to fix many things in Kashmir – including dismantling the ecosystem that rewards separatists and terrorists but penalises loyalists. But if the government decides to confront the problems in Kashmir in a piecemeal manner and at a tactical level, then this tragedy will only be a precursor to a bigger tragedy.

This piece was originally published by the Observer Research Foundation (ORF) and has been republished here with permission.