The Indian Army Gets Its New Chief. Here’s Why Lt Gen Bipin Rawat Scored Over Others. 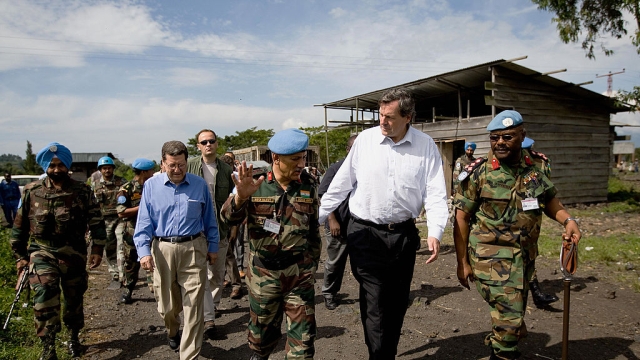 It is a gratifying moment for me, personally, to see one of my former General Officers from the challenging days of 2011 in Srinagar being appointed as the new Chief of the Army Staff. Lt Gen Bipin Rawat, currently Vice Chief of the Army Staff (VCOAS) is set to be the new army chief with effect from 1 January 2017, on the superannuation of Gen Dalbir Singh Suhag.

The announcement has drawn attention for various reasons. First, the appointment has been made a mere two weeks before the crucial position is due to fall vacant; it usually happens at least two months prior. Second, Gen Rawat supersedes two competent General Officers, Lt Gen Praveen Bakshi and Lt Gen P M Hariz. The Indian Army has normally followed a system of appointing the senior-most qualified officer as army chief. The tenure is three years or till the age of 62, whichever comes earlier. In the past, it is only at the time of appointing the successor to Gen K V Krishna Rao that the government did something similar and overlooked the then senior-most qualified officer, Lt Gen S K Sinha, and appointed Lt Gen (later Gen) Arun Vaidya as the army chief in 1983. That remains the only precedent.

There is a system in place for appointing the army chief. The army headquarters and, in turn, the Ministry of Defence forward the names and dossiers of five senior-most qualified officers, after the current army chief, to the Appointments Committee of the Cabinet (ACC). The record of service of the officers is scrutinised. The ACC may ask for a longer list if they decide that some of the names under consideration are unsuitable. The word ‘qualified’ here means that the names of officers of the General cadre only can be forwarded. There may be officers of services or other arms who have not been inducted into the General cadre but are senior to the others eligible; but since they are not in the command chain, they are not eligible for consideration.

So, what is unusual about this appointment? First, for the first time ever, two of the senior-most General Officers after the army chief have been overlooked and the fourth in seniority appointed. The government is within its right to do that. The only speculation doing the rounds is that Lt Gen Bakshi, currently General Officer Commanding-in-Chief of the Eastern Command and the senior-most after Gen Dalbir Singh could be appointed the first Permanent Chairman of the Chiefs of Staff Committee in the rank of General. It is not certain at this moment what this appointment finally will be or whether it has been approved at all. It is the near-equivalent of the contemplated Chief of the Defence Staff (CDS). If that does happen, the only one superseded would be Lt Gen Hariz, the current General Officer Commanding-in-Chief of the Southern Command.

There can only be speculation and debate on why the government has opted for a deeper selection and not followed the time-tested system of seniority. Lt Gen Bakshi is a highly competent cavalry officer from the Skinner’s Horse. Cavalry officers do not command troops in a counter-insurgency environment or at the Line of Control due to the nature of responsibility of different arms and services of the army. Cavalry officers serve their command assignments in the desert, plains or obstacle-ridden terrain where no insurgency or situations involving terror threats or infiltration exist. This is their task and they come up in service learning and experiencing these conditions for future contingencies in conventional warfare. At best, they can serve in staff appointments in formations deployed in such threat-prone areas.

However, from the rank of Brigadier and upwards, all officers belonging to the arms (including infantry, cavalry, mechanised infantry and other arms by selection) can serve in command assignments at the Line of Control and in counter-insurgency operations such as in Jammu & Kashmir. Lt Gen Bakshi has not had that kind of experience but for no fault of his own, because the system would have considered him more competent to command in his own environment in the plains and appointed him accordingly.

The same is true in the case of Lt Gen Hariz. He is a hardcore mechanised infantry officer who does not have operational experience because such experience in today’s environment is only available to those who serve at the Line of Control, Siachen or in intense counter-insurgency operations. Lt Gen Hariz, like Lt Gen Bakshi, has an excellent career record, having attended the Staff College, Camberley, United Kingdom and served in the United Nations, but alas, it’s the operational experience that is missing.

To make up for his lack of exposure to counter-insurgency and Line of Control/Siachen-type operations, Lt Gen Bakshi was posted by the army to the headquarters of Northern Command as the No 2 (Chief of Staff), and thereafter has commanded Eastern Command, which deals with the challenging Chinese front all along the Line of Actual Control and the insurgency in the North East. Possibly the government did not consider this as adequate experience in handling turbulent situations.

Lt Gen Rawat commanded a company at Uri, a battalion of the 11th Gorkhas in the North East, the Rashtriya Rifles Sector at Sopore (the heart of militancy in North Kashmir), the famous Dagger Division at Baramulla, which is responsible for the most crucial part of the Line of Control at Uri and a Corps in the North East, where he oversaw the management of the Line of Actual Control in Arunachal Pradesh and handled the insurgency in Nagaland, Manipur and Lower Assam. He oversaw the planning and execution of the raid along the Myanmar border in early July 2015. He commanded the Southern Command at Pune, whose orientation is in the desert areas, before assuming the appointment of VCOAS under Gen Singh.

Even on staff, he has been in the Military Operations Directorate and the Military Secretary Branch handling crucial policy issues besides being the Head of Operations of the headquarters of Eastern Command. Additionally, he also won the Sword of Honour for his course being declared the best all-round Gentleman Cadet.

So, in the current threat environment, it appears that the government perceives the type of operations that Pakistan will involve itself in to be low-intensity ones, in Jammu & Kashmir and North Punjab, along the Line of Control and the International Border. Typically hybrid in nature and at the highest levels, it is usually perceived that such threats require competent understanding, handling and directions or orders. However, the government, troubled by the extent of casualties that the army has suffered in this persisting threat environment, may have decided to opt for an experienced hand to lead. On the operational side, there could not be a better officer than Lt Gen Rawat to handle the nature of threats that Pakistan and indeed China are posing to India.

Lt Gen Rawat has five decorations, almost all of them in operational command. He is also the winner of the Sword of Honour from the Indian Military Academy, and has attended the Command and General Staff Course at Fort Leavenworth, Kansas, United States. While one does feel sorry for the General Officers senior to him, who too are extremely competent, in all probability, the government considered Lt Gen Rawat’s hands-on experience in the current environment and decided to appoint him the army chief in the national interest.

At the outset, I’d like to add that in 2011, when in command of the Srinagar-based 15 Corps, I put in a special request to the Military Secretary Branch that I would best prefer the services of then Major Gen Rawat for the command of the crucial Baramulla Division. The request was accepted and Lt Gen Rawat served an outstanding tour of duty with me, displaying throughout his complete understanding of the threats and the ways of overcoming them. I have no doubt that he will display the same grit and competence in the elevated role. The eyes of the Indian Army and the nation are on him. I wish him a great innings as army chief.