The Prisoners Who Never Returned: A Moving Account Of Missing Indian Soldiers 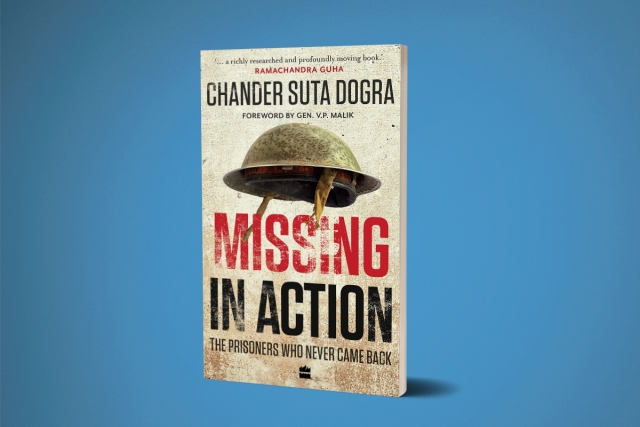 The cover of the book, Missing in Action: The Prisoners who Never Came Back.

On 16 December 2020, Prime Minister Narendra Modi lit Swarnim Vijay Mashaal from the eternal flame of the National War Memorial in New Delhi to mark the beginning of a year-long celebration of the 50th anniversary of India’s military victory over Pakistan in 1971.

He went on to tweet, “Vijay Diwas is a fitting reminder of the valour and sacrifice of all those who fought courageously in the 1971 war. Tributes to them.”

Every year, India celebrates 16 December as ‘Vijay Diwas’ to commemorate this military victory.

In 1972, Amar Jawan Jyoti, a memorial with an inverted rifle and a soldier’s helmet surrounded by an urn which holds a continuously burning flame, was built at India Gate to commemorate the martyred soldiers of the Indian Armed Forces who gave up their lives during the war.

More than 3,800 Indian soldiers were martyred during the war and several hundred were missing.

A victorious India captured approximately 93,000 Pakistanis that included soldiers and officials of the then East Pakistani administration. Pakistan captured more than 600 Indian soldiers from the Western front where the Indian Army suffered some reverses.

Even though the officially declared prisoners were repatriated by both countries after protracted post war negotiations, some men failed to return. Five decades after the war ended, the families of many such soldiers continue to wait. This is an unfinished aspect of the war that still awaits a closure.

Journalist and author Chander Suta Dogra has researched and brought out a moving account of these missing Indian soldiers and their families in her seminal book ‘Missing in Action: The Prisoners who Never Came Back’.

The book was released by Gen VP Malik (Retd) in Chandigarh and Ram Madhav of Bharatiya Janata Party (BJP) in New Delhi.

Here we discuss her book and the unending tragedy of the missing Indian soldiers.

Q: We have just celebrated the 49th anniversary of Vijay Diwas. Yet the day also reminds us about those soldiers, who never came back; they who are still missing. As a nation, have we forgotten them?

A: Whenever Vijay Diwas is observed, whether it is the anniversary of the 1971 war or the Kargil conflict, the nation, led by the government of the day remembers the victories and the heroes who made them possible. The sad saga of the soldiers who never came back is rarely mentioned. It is seen as an inconvenient matter that should be tucked away into some dark corner.

Q: Your book traces the missing soldiers from as far back as the 1965 war to the 1971 war. In your opinion, have successive Indian governments done all that they could do, to get these men back to India ?

A: In the initial years after the 1971 war the government did make an effort by taking up the issue several times with the Pakistan government. Talks were held at the highest levels where specific names were also discussed, but these were in bilateral forums where Pakistan steadfastly denied holding the men.

It was their word against ours. India has always avoided taking this issue to an international forum such as the International Court of Justice or the UN for fear of inviting third party interference in its internal matters. And that is where the matter rests.

Q: There was a news report few years back about two Chinese PoWs of 1962 war being found at a mental hospital in Ranchi. In your opinion, is there any hope of any missing Indian soldier being found somewhere in Pakistan in similar circumstances?

A: Often, officialdom is dismissive about the possibility of our missing soldiers being alive somewhere in captivity as so much time has elapsed. But one can never give up hope. After all, even the Pakistani soldier, Sepoy Maqbool Hussain, who was captured in the 1965 war (whose story is given in the epilogue of my book) was found and returned by India after more than 40 years.

Q: Whenever the question of missing soldiers comes up, the most obvious question that people ask, is when India sent back 93,000 Pakistan PoWs why did India fail to account for its own soldiers?

A: There were 616 Indian PoWs captured from the Western front, all of who were repatriated by Pakistan in December 1972. The missing soldiers are believed to have been kept as security prisoners or ‘spies’ and the norms for treatment and punishment of spies is not the same as POWs who are protected under the Geneva Conventions.

One of the reasons why some men were held back is that they were possibly being used as bargaining chips in case India failed to return the 195 senior Pakistani soldiers, who were wanted by Bangladesh to face trial for war crimes. But India returned all the 93,000 prisoners including the 195 officers in return for the safe release of Mujibur Rehman and the recognition of Bangladesh by Pakistan.

For the Indian political leadership at that time, cementing its victory was all important for which it was imperative that Bangladesh took its place as a sovereign nation in the international community. Nothing else mattered. Consequently, the captive Indian soldiers lost their relevance and continued to languish in Pakistani custody.

Q: The official Indian count of missing Indian soldiers is 83. However, in your book, you point out that this figure may be erroneous. What according to you is the correct figure?

A: When the list of missing Indian soldiers was first presented in Parliament in 1979, there were 40 names on the list. These were soldiers who went missing in the 1971 war. In the early eighties some more names were added on the basis of additional evidence and the list swelled to 54.

In recent years, names of soldiers who went missing in peace time operations along the Line of Control or the international borders were added to take the figure to 83. But when I began researching the issue, I discovered that some of the names in the list are of soldiers who were confirmed killed in action.

Informally, senior diplomats who dealt with the issue after the 1971 war believe that at least till the eighties they had information that about 15 Indian soldiers were in Pakistan’s custody. It is anybody’s guess how many would have survived to this day.

Q: One of the most tragic stories in your book is of Major Ashok Suri. As per your research, do you believe that he was alive and imprisoned in some jail in Pakistan?

A: Well if you look at the records, it certainly seems so. And, the government also believes the same because it was in 1976, a full five years after the war that it wrote to the International Committee of the Red Cross, admitting it had made a mistake. Two handwritten notes written by Ashok himself had arrived at his father’s residence in 1974 and 1975, along with other inputs that led the government to believe that it had erred in declaring him as killed in action.

Q: You mention that during the Shimla talks, the issue of missing Indian soldiers was not even on the table. Can this be accounted from official records?

A: Oh yes. If you look at the official history of the 1971 war, all that was briefly discussed was the return of the 93,000 Pakistani PoWs and the 616 Indian PoWs declared by Pakistan. There was no military representative at the Shimla talks and there was little appreciation within the civilian bureaucracy about the need to press for missing soldiers.

It might even be correct to say that few at that time would have imagined that Pakistan would have the temerity to quietly hold back some missing Indian soldiers. Evidence about the missing men began to trickle in much after the Shimla talks.

Q: George Bush, John McCain, Prince Harry, in Western world prominent families send their sons to war. We don't see the same in India. How does it affect the outlook of our political leadership towards our armed forces?

A: Yes, this is a major problem and explains the lack of empathy and sensitiveness towards soldiers and the hardships faced by their families in India. The soldiering community also loses out in an atmosphere where vote bank politics dictates government benevolence.

Q: Out of all the cases that you have mentioned in your book, the case of Lance Naik Jaspal Singh is the most intriguing. Can you please elaborate on it?

A: The detailed story of this strange case is found in my book. But to put it briefly, Naik Jaspal Singh who was among the many believed to be killed in action in the battle of Hussainiwala in 1971 was unexpectedly discovered by a Sikh carpenter in a jail in Oman in 2011.

He spoke of two other soldiers being there. His alleged presence in Oman created furore as it raised the possibility of some missing soldiers shifted to friendly Arab countries by Pakistan to avoid detection. India took up the matter officially with Oman and it was flatly denied. No more has been heard of this matter since then.

Q: Has this matter ever been taken to the courts? If so, what was the outcome?

A: In 1999, Lt Gen Jagjit Singh Aurora, who accepted the Instrument of Surrender from Lt Gen Niazi petitioned the Gujarat High Court to highlight the absurdity of treating missing soldiers as ‘killed in action’ in official records while asserting in Parliament that they were being held by Pakistan. He was moved by the plight of the families who were trying to convince an indifferent government that it has to do more than just plead with Pakistan to relent.

On 23 December, 2011 the court directed the government to firstly approach the International Court of Justice to secure the release of the missing soldiers. The court’s second directive was that the next of kin be paid service and retirement benefits in accordance with the existing provisions applicable to soldiers on superannuation.

In an ideal world, this should have logically followed as soon as the men were declared missing or at least when their names were tabled in Parliament.

Q: Next year is the 50th year of Vijay Diwas. Is it possible to have any sort of closure for the families of these PoWs?

A: The families of the missing men who have collected evidence over the years know that after five decades there is very little chance of these men being alive. All that they wish to know is what happened to them. Did they die in action, or in some dark prison cell in enemy country? But for that to happen, India will have to make a reciprocal effort to acknowledge and facilitate a similar exercise for Pakistani families searching for their missing men.

Krishna Kant Sharma is a New Delhi-based technology professional with extensive experience in IT, telecom and digital domains. He has varied experience, having worked with the central government as well the private sector. His interest areas include politics, military strategy, technology and gender rights. He is also an avid sportsman and a keen philatelist.