What Are India’s Security Challenges In 2019? 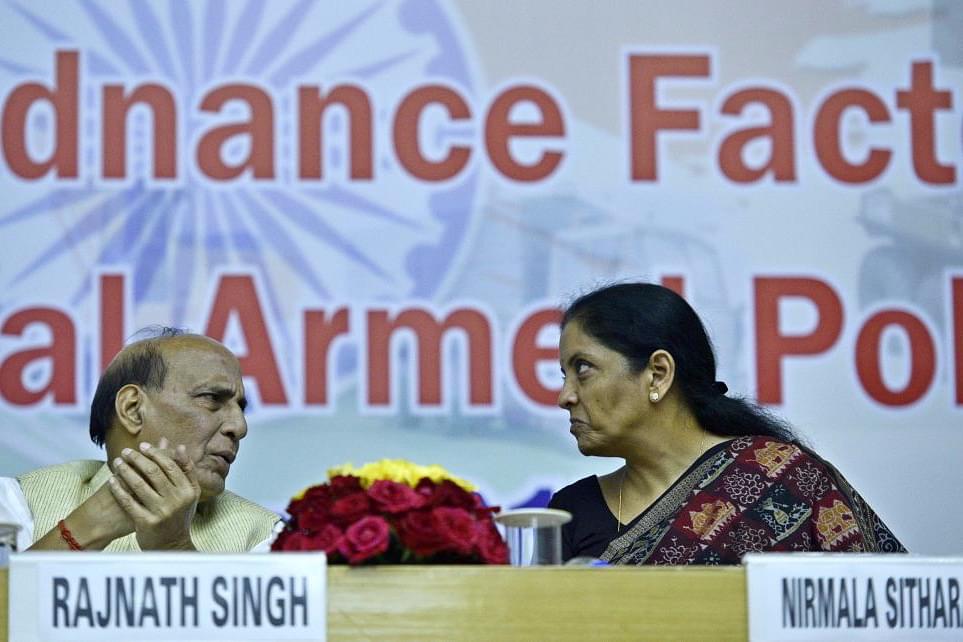 Defence Minister Nirmala Sitharaman and Home Minister Rajnath Singh at an event organised by the Defence Research and Development Organisation at the DRDO Bhawan on September 7, 2017 in New Delhi, India. (Photo by Arun Sharma/Hindustan Times via Getty Images)

While wishing Swarajya’s readers a happy 2019, it is important to recall that 2018 was largely one of those years when India remained relatively more secure from almost every angle. A bean count of a few areas and instances will revive and reinforce memory.

Firstly, unlike 2017, there was no Doklam type of standoff on the border but tension on the Line of Actual Control (LAC) with China did continue, more silently.  Relations with China improved but with no certainty of permanence. China continued trying to encircle India by attempting greater influence among India’s neighbours but did not succeed except marginally in the case of Nepal. Maldives became an Indian success story and Sri Lanka remained a cusp affair, no winners no losers.

Secondly, the US progressed towards accepting India’s role as a strategic partner despite President Trump’s unpredictable approach which harped on day to day changes. Some good diplomatic moves by India ensured that the US did not retaliate in any way to India ‘s retrieval of its relationship with Russia; the acquisition of the S-400 air defence system from Russia did not attract the Countering America’s Adversaries through Sanctions Act (CAATSA) nor was there any retribution for India continuing to purchase energy from Iran and pursuing its relationship with it.

Thirdly, India went along multilaterally with many combinations – the Quadrilateral of Nations, the Shanghai Cooperation Organization, ASEAN and East Asia Summit, being a few examples. The multilateral effort was the uniqueness of diplomacy demonstrating the retention of national interests while engaging with all.

Fourthly, the relationship with Pakistan did not deteriorate although it did not improve either. A mid-year decision for stricter implementation of the LoC ceasefire did see a cooling of temperatures there. However, towards the year end, the situation was moving towards breakdown with sniping and Pakistan Border Action Team (BAT) actions.

The Kartarpur Corridor created hype about potential improvement of relations with Pakistan. However, it later emerged as a ploy of psychological warfare against the people of Punjab and an effort to spread alienation and militancy to Punjab to embroil Indian security forces into internal operations.

Internal security continued to improve along the extensive Red Corridor with more districts returning to peace and normalcy. The benefits of development spread deeper into the tribal areas. The same could not be said of the situation in J&K where the absence of a coherent national strategy is appearing evident to even those with no connect with J&K. Alienation is running deep although there have been creditable achievements by the security forces in terms of the number of terrorists neutralised.

Unfortunately the lack of a matching strategy in the social and information field has allowed the recruitment of 180 or more local youth from South Kashmir while the balance numbers have been made up through infiltration.

So what is in store for us in 2019?  The challenge is whether the multilateral relationships that held us in good stead in 2018 can be continued this year.

The major US stakes in India are twofold – the role in the management of the security of Indo-Pacific as a countervailing presence against China and the management of the Afghan imbroglio. However, India’s success in 2018 in stabilising relations with China was based upon the limits it placed in its proactivity in South East and East Asia. It desisted from full participation in the Quad of Nations but had presence at all summits and Mr Modi even spoke at the Shangri La Dialogue, Singapore.

China only wishes to activate the Himalayan front as a tool to keep India in check on all other fronts where it envisages India as a competitor. India’s relative military weakness while facing collusive threats from China and Pakistan remains a major disadvantage. However, China is unlikely to ratchet pressure any higher lest India sheds multilateralism and embeds into the US camp firmly.

Thus, the playoff of 2018 will continue even as China remains under pressure of the US on the trade front and its economy begins to flag after many years of success. How China handles this, will decide its stance towards India.

Pakistan, however, is going to continue its unpredictable and irrational game with India under presumed Chinese cover. China-Pakistan relations are unlikely to flag in view of mutual interests in Afghanistan and in rest of South Asia. The threatened US partial pullout from Afghanistan gives Pakistan a boost in strategic significance. Given all this, Pakistan is going to watch the internal Indian scene very carefully and continue its policy of peace overtures even as it continues to keep the LoC hot and the hinterland of Kashmir adequately tense.

In the light of this, diplomatic dexterity by India is imperative even though it may be under internal strain of a general election through half of 2019. India must continue to pursue its Act East policy where there has been good success but must be extremely watchful of its immediate neighbourhood where success in Maldives and Sri Lanka must only be considered temporary.

With Bangladesh stable under a friendly government, it can extend its good offices to assist in the Rohingya issue with Myanmar, an issue in which Bangladesh has been expecting more proactivity from it.

Nepal definitely needs India’s attention and its Afghanistan policy must continue without reacting too quickly to the emerging situation there. Keeping a window open towards the Taliban will not hurt even as India supports the National Unity Government. It must exert its right to be a part of all forums where the future of Afghanistan is to be discussed even though Pakistan Foreign Minister Shah Mahmood Qureshi’s mention of the need for Indian involvement must not be taken at face value.

India has done well in its policy on Middle East, straddling different combinations and alliances. Its core interest lies in the continuity in flow of energy from all quarters, preventing any turbulence in the Gulf which may upset this, securing the interests of its large 7.2 million diaspora in the Gulf and protecting the flow of remittances which contribute to its economy.

With Iran, India has secured exemption from US sanctions to a great extent The US recognised the importance of ChaBahar and exempted Indian firms involved in the port from sanctions. India was also one of the eight countries to receive temporary relief on oil imports from Iran. The pursuance of a policy whereby there is continuity in US stance on this is imperative for India. Afghanistan’s reduction of reliance on Pakistan for its strategic communication, due to emergence of Chabahar will also indirectly help the US although its own logistics will not shift to the Iranian port for obvious reasons.

On the internal security front four areas require focus. First, the success in the Red Corridor needs to be cemented with greater development outreach, coordination of state police forces and continued pressure on the Maoists.

Secondly, the ugly head of communal violence brought on through lynchings and spread of fake news will need the attention of the internal intelligence agencies. The artificial political climate created by elections must not be allowed to play havoc with internal security.

Thirdly, the year-end busting of Islamic State modules must be taken more seriously than is being advocated by many naysayers and doubters of the NIA success. A tip of emerging forces in the area of terrorism must be investigated to finality. Yet, it must also be ensured that there is no vilification and extended custody for apparent innocents. The potential spread of IS networks into north India from the erstwhile concentration in southern India is cause for concern which must receive adequate attention.

Fourthly, J&K must have an early strategy with all agencies on board. Elections are not immediately necessary although a democratically elected government has to emerge in due course. What is important is to balance the robust operations with adequate soft power and outreach. Everyone in India seems to be aware of the requirement for such a balance but none seem to have an idea how to do it.  There are successful models of the past which languished due to insufficient energy displayed towards continuity.  These need to be revisited. In addition without, a synchronised ‘all agencies on board’ based information campaign, countering the virulent Pakistani and separatist propaganda and the scourge of radicalism, will not be possible.

There are no potential solutions to J&K with Pakistan anywhere on the horizon. 2019 could be the harbinger of greater substance towards more inclusiveness of the people of Kashmir with rest of India.

Lastly, on the security front, while conventional wars may temporarily be passé internationally the existence of threats on our borders and in the maritime zone demands a need for adequately equipped, manned, trained and led conventional forces. This is a must for deterrence against adversaries and infusion of confidence among our own people. To ensure this, a high standard of civil-military relations, understanding of the constraints of conventional security by the political community and a strategic culture within the nation is a must. India is weak on all three fronts, something very few have the courage to admit; it is also exemplified by the poor budget support the Armed Forces receive. There need to be task forces created on all three fronts to steer India in these directions.

2019 could be a year to take such an initiative, provided there is a will and adequate scope for debate.