Why Parrikar’s Will Be A Tough Act To Follow 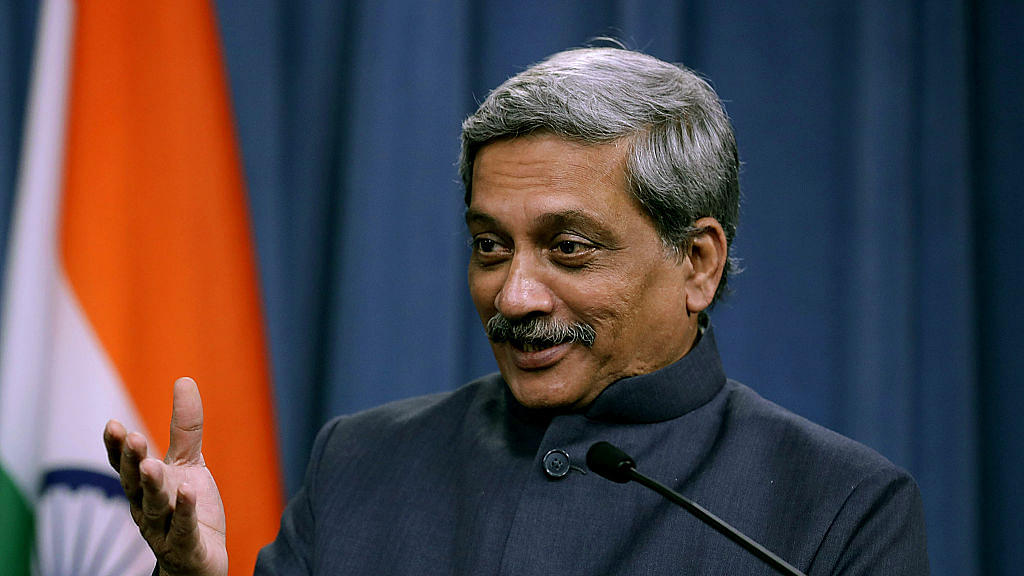 Now that Manohar Parrikar’s return to Goa is done and dusted, the immediate priority for Prime Minister Narendra Modi will be to find an equally hard working, transparent and approachable Raksha Mantri for India. Though Arun Jaitley, the perennial ‘go-to’ man has been given the additional charge of the Ministry of Defence (MoD), surely he can’t be expected to handle two large and critical ministries simultaneously.

However, whosoever is the new occupant in South Block in the coming months will find it a hard act to follow since Parrikar, in his 28 month stint, had brought in a new sense of vigour and purpose in the largely moribund MoD.

Before Parrikar took over as Defence Minister, he had been variously described to me as a reluctant politician, an even more reluctant minister at the Centre and an outsider in the power corridors of Delhi. To my mind however, after getting acquainted with him over the past two-and-a-half years, Parrikar can be best described as a simple man who is not a simpleton; a man of frugal habits who shunned all visible trappings of power and was quick to understand complex issues.

Those attributes not only allowed him to grasp the intricacies and complexities of the important ministry but also enabled him to put his own stamp on the day-to-day functioning of the MoD. There have been slip-ups and some embarrassments too, because well-entrenched vested interests tried to undermine his authority.

I remember meeting him for the first time in February 2015 (before that, had only heard about Parrikar as an unusual politician). One of the questions he had was: “What in your view is the biggest challenge here?”

At first, because of unfamiliarity with him, I had thought of playing safe and gave a standard reply that, “it’s a large, sensitive and important ministry and therefore not easy to understand quickly.”

But his easy manner encouraged me to be bolder and remark: “Your greatest challenge will be the status quo mindset that pervades through the civil and military bureaucracy. Everyone will tell you that such and such thing cannot be done because there has been no precedence to it. If you can overcome that trend, maybe you would have made a big start.”

I can’t judge if Parrikar took that input (not advice) seriously but whoever I came across since then – whether in the services or in the defence industry – swore by Parrikar’s efforts to re-engerise the MoD and bring in more accountability.

This in itself is a big change because at the best of times, the MoD is a lumbering giant, slow to stir and act. It is not only entrusted with the defence of India but is also the administrative ministry for India’s nearly 15 lakh military personnel (Army, Navy, Air Force and Coast Guard). It also has one of the largest budgets in the government of India. For 2017-18, for instance, it has been allocated Rs 359,854 crore ($ 53.5 billion). Critics have quibbled over the comparatively low increase in the defence budget this year. But that is the least of the challenges.

Instead, reducing timelines for acquisitions, better and optimum utilisation of available resources, bringing in more accountability and transparency in MoD’s functioning and making sure most critical voids in India’s defence preparedness are made up in quick time, have been the focus areas in South Block. But above all, the MoD under Parrikar saw to it that the Make in India initiative of the Prime Minister gets the necessary impetus in defence production.

Promulgation of Defence of Procurement Policy (DPP)-2016 was the first step towards making fundamental changes in the way weapons platforms are acquired in India. The Buy IDDM (Indigenously Designed, Developed and Manufactured) category introduced in DPP-2016 now gets the top-most priority amongst six categories that constitute the new DPP, which is the guiding document for all defence purchases in India. In effect, this means all those Indian companies which have the capability of designing and developing their products indigenously will from now on get the first preference in most purchases that the three armed forces undertake.

Under the new category for Indigenously Designed, Developed and Manufactured (IDDM) equipment, it will be mandatory for 40 per cent of the content to be sourced locally.

The new DPP has many fresh ideas designed to accelerate defence acquisitions while encouraging indigenous companies under the flagship programme of Make in India. For instance, in order to cut down delays, the DPP henceforth mandates that all AONs (Acceptance of Necessity) of a particular platform will be valid only for only six months as against the 12 months deadline that it currently provides. Moreover, no AON will be notified until it is accompanied by a finalised RFP (Request for Proposal or detailed tender). In essence, this eliminates one intermediate stage since notifying an RFP after an AON used to be inordinately delayed.

Prioritisation of projects was the first step. Defence acquisitions are expensive and since very little was purchased in the past five years, the backlog just added to the problem. A review of proposed projects made over the previous five years found that the bureaucracy in the ministry – both civil and military – were sitting on some 400-odd big and small projects that were critical to the three armed forces. A thorough review revealed that nearly one-third of the 400-odd projects were now irrelevant. So they were discarded. About 50 projects were accelerated since they were of critical importance.

Next, important schemes across the three services that needed immediate funding and implementation were identified. The figures speak for themselves: The MoD cleared a total of 124 new contracts worth Rs 209,751 crores since the Modi government came to power. These include artillery guns, attack and medium lift helicopters for the Army (Chinook and Apache helicopters from the US); frigates and mine counter-measure vessels for the Navy and Akash missiles for the Air Force.

Post-September 2016, when India conducted surgical strikes against Pakistan and it seemed for a while that Pakistan may mobilise for a larger conflict, India’s Cabinet Committee on Security (CCS) authorised the three forces to make fast-track acquisitions worth nearly Rs 20,000 crores making it one of the most productive years for the MoD.

This had to be done on priority because the previous government had neglected even the basic requirements. The previous Comptroller and Auditor General (CAG) report tabled in Parliament made for grim reading. “Stocking of ammunition even at ‘minimum acceptable risk level’ was not ensured, as availability of ammunition as on March 2013 was below this level in respect of 125 out of a total of 170 types of ammunition.” Also, in 50 per cent of the total types of ammunition, the holding was “critical” – insufficient for even 10 days of fighting, the report added.

This has now been corrected by making sure that ammunition for 10 days of intense fighting is always in stock. Once that objective is achieved, the ministry will look at further replenishing the stocks. The delegated financial powers for vice chiefs of the three services and Army commanders has been enhanced to allow speedier purchases. This is a big change in the notoriously slow and opaque functioning that has historically besieged the MoD.

In another major decision, the government opened up the defence sector for foreign direct investment (FDI), allowing 49 per cent FDI through the automatic route and up to 100 per cent FDI on a case to case basis. Also, the restrictions on what was ‘state-of-the-art technology’ has been reduced to ‘modern technology’. This would increase the number of defence companies investing in India.

Procurement and modernisation of three services apart, the biggest decision by the Modi government was to grant the One Rank One Pension – a 40-year-old demand of the veterans. Although there have been some voices of disgruntlement on the issue, the fact is, this government showed the necessary political will and resolve to give due dignity to military veterans.

Significantly, MoD has now allowed authorised, registered agents to represent companies and eliminate delays or cancellation of contracts because of anonymous complaints. Anonymous letters are now a no-go. The ministry wants to use the power to ban a firm only in the rarest case. The previous government had indiscriminately blacklisted over a dozen firms, severely restricting the options of the forces to source equipment.

Despite Parrikar’s efficiency and good intentions, a toxic legacy left behind by a decade and more of lethargy and timidity under A K Antony will take sustained efforts by Parrikar’s successor to ensure that the MoD effectively discharges its duties towards securing the nation.

Half done initiatives like choosing the strategic partners for making defence platforms in India, reforming higher defence management (appointing a CDS – even if 4-star), creating joint commands for space, cyber and special operations will have to be followed by Parrikar’s successor. It’s for PM Modi to choose the right man – or woman – to do that, and do it fast.

This piece was first published on Bharat Shakti and has been republished here with permission.