Ad Hoc Agri Export Policies: Instead Of Banning Onion Shipments, Modi Sarkar Should Have Looked At Other Options 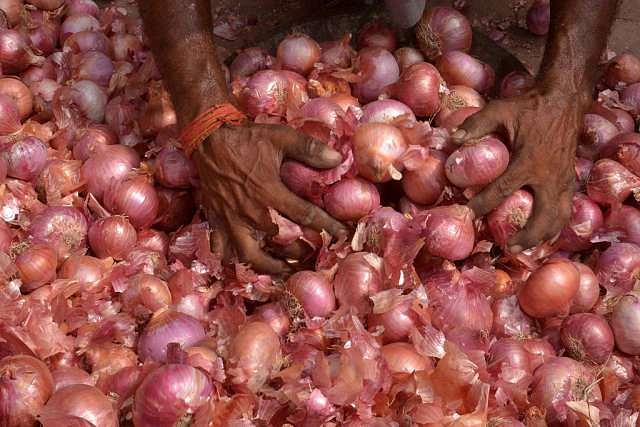 Onions in a market. (NARINDER NANU/AFP/GettyImages)

Last week, the Narendra Modi government banned exports of onion, including Bangalore Rose and Krishnapuram varieties, following a surge in its prices and reports of shortage.

Fortunately for some exporters, the government allowed exports of onions that were in transit or lying in ports to all countries.

Onion prices have more than doubled since the beginning of this month from around Rs 1,450 a quintal (100 kg) to Rs 3,400 now at Nashik Agricultural Produce Marketing Committee (APMC) yards, the hub of onion trade in the country.

The Centre’s ban was imposed on 14 September after prices nearly doubled to Rs 2,800. Though prices tended to drop thereafter, they surged again yesterday (22 September).

Onion prices during the same time last year were at least Rs 700 a quintal higher than current prices. At Rs 3,400 a quintal, it is likely that onion prices at the retail level could cost nearly Rs 70 a kg.

The primary reason for the prices to surge this month is due to heavy rains that Karnataka experienced last month. The rains damaged onion crop in the state, leading to the rise in prices.

One has to understand the dynamics of the onion market. Onion is grown as kharif (summer), late kharif, and rabi (winter) crops across the country.

The Rabi onion has a longer shelf life and it is in view of that, we are able to get onion at least until September, when the kharif crops begins arriving.

The significance of the Karnataka onion crop is that it arrives in the market much before others in September. As last month’s rain affected the crop in the state, the arrivals have been affected and have thus led to a surge in the prices.

The price trend will likely continue until the crops begin arriving in States such as Maharashtra, Gujarat and Madhya Pradesh.

Main Reason For The Ban

With a fortnight to go for the arrivals of the new onion crop, the Centre could have adopted a “wait and watch” policy. The main reason for the onion export ban is the Bihar elections due next month.

Onion price is a sensitive issue and the Bharatiya Janata Party (BJP) had lost assembly elections in Rajasthan and Delhi in 1998. The BJP hasn’t returned to power in the capital ever since.

Congress also lost Rajasthan in 2013 due to surging onion prices.

In such circumstances, the BJP government has chosen to tread with caution on the issue, especially after onion prices zoomed to record high last year.

Unseasonal rains wreaked havoc on onion crop last year leading to the vegetable price ruling over Rs 100 a kg at retail outlets in some parts of the country.

However, the decision to ban onion does not seem to be a wise move. The main reason is that such ad hoc export policies affect the country’s reputation as a credible seller or exporter.

Such ad hoc policies not just make buyers suspect you but also force them to offer lower prices in view of the unreliability.

The other reason why the move is unwarranted is that during April-June this year, onion is one of the commodities that helped agricultural exports increase 23 per cent.

The other issue that the government has overlooked is that it did not choose to put the buffer onion stocks it had built to use at this crucial moment.

Buffer Stocks Could Have Been Put To Better Use

Last year, the Centre is reported to have built a buffer stock of nearly 60,000 tonnes last year when prices ruled low in the first half.

The government creates a buffer stock for two reasons. One, when farmers get low prices it can buy the vegetable and build the stocks so that prices improve in the market and their returns improve.

Two, when prices surge and affect the common man the government can offload these stocks to soften the price burden.

The Centre is reportedly sending onion from the buffer stocks now to some states but it should have first begun releasing onion from its stocks to help bring down the prices than impose export ban.

The ban could have been imposed if the move to release buffer stocks had not yielded the desired result. What has happened is that the announcement of ban has actually triggered panic and helped push the prices up.

For instance, onion prices in Madhya Pradesh last year were under Rs 1,500 a quintal in September when they surged in Maharashtra. Thanks to the ban, prices in the central Indian state have now increased to Rs 3,200 a quintal.

In terms of arrivals in Madhya Pradesh, they are nearly double this year at about 70,000 tonnes compared with 38,000 tonnes last year.

In Gujarat, however, arrivals this year are one-third of what it was last year. Harvest in the western state has been delayed due to rains last month.

But they will likely increase from early next month.

The Modi government could have waited until the onset of October to see how arrivals of the kharif crops were and used the buffer stocks until then instead of imposing export ban.