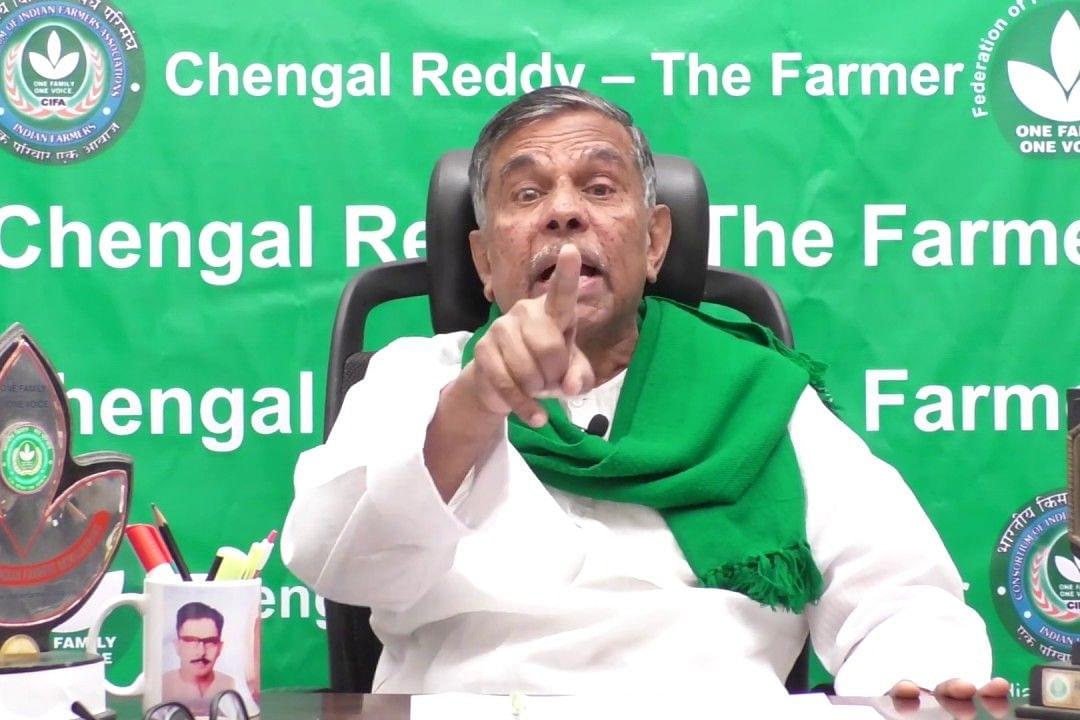 The Union government should allow other sectors, especially private and cooperative, in agricultural extension services to overcome some of the ills plaguing the sector, according to P Chengal Reddy, chief adviser, Confederation of Indian Farmers Association (CIFA).

Indian agriculture sector is suffering due to low productivity, harvest especially of perishable goods going waste and at least 60 per cent of the area under cultivation being rain-fed.

“These problems exist as extension services which give advice to farmers is not available fully to the growers. Not even five per cent of the farmers in the country have access to extension or technical services,” Reddy said in an interview to Swarajya.

The extension workers can give proper advice to farmers on adoption of pesticides, weed control or technology.

“These are not known to 99 per cent of the farmers in the country. They are blindly cultivating crops resulting in mono cropping. They are not aware of ground conditions as a result of which there are seven hands (persons) between the farmer and consumer,” Reddy, who took the first initiative to bring various farm associations in the country under one umbrella, said.

“Barring Punjab, Haryana and coastal Andhra, the productivity levels in rest of the country, particularly Bihar, Assam and Jharkhand are low,” said the CIFA leader, who is founder and now Chairman, Federation of Farmers Associations, Andhra Pradesh.

Pointing out that except rice and wheat, there was a huge wastage of harvested agricultural produce, particularly perishables, he said the wastage is as high as 25 to 30 per cent.

“The other aspect affecting Indian agriculture is that 60 per cent of the area under cultivation is rain-fed. It is one of the reasons why agriculture’s contribution to GDP is lower,” Reddy, who launched the Networking Farmers Association in 1986, said.

Value-addition done in the country to agricultural crops is marginal. Though value-addition was good in the case of cotton, spices and edible oils, the real benefits were not accruing to farmers, he said.

Today, a big opportunity beckons Indian farmers in the colouring agents’ industry. “Natural colours can be derived from oleoresins that can be tapped from chilli, turmeric, flowers, and other plants. Natural colours are in demand, which is in trillions of dollars. They can be used in food, medicine and clothing,” the CIFA chief adviser said.

“It is here that extension services can come in handy, right from the stage the farmers buy seeds for cultivation,” Reddy, who launched Indian Farmers and Industry Alliance in 2003, said.

He said he favoured privatisation if not allowing other sectors in agricultural extension.

“Look at the privatisation of the hospital sector. Even if extensive research is not taking place, investments have happened. Look at media and see how it is performing the job of extension services by disseminating news of all kinds to the people,” he pointed out.

Bringing private sector in the extension service would help in improving productivity that has stagnated in the country.

“A shopkeeper dealing in agricultural inputs will only sell seeds, pesticides and weedicides. Farmers need expert advice, which would be almost like a prescription for their crops. That can be provided only by extension personnel,” Reddy, who has brought about 400 organisations under CIFA’s umbrella, said.

Wondering how many times a farmer meets a government agricultural extension officers in a year, the CIFA chief adviser said this has led to serious misuse and abuse of pesticide and land.

“Lack of proper extension services to farmers has resulted in problems like presence of pesticide residue in crops, losses to farmers, soil degradation besides other environmental problems,” Reddy said.

In particular, he pointed out at the recent outbreak of a mysterious disease in Eluru in Andhra Pradesh. This has now been traced to pollution of water by chemical wastes leading to agricultural produce being contaminated.

On the other hand, he pointed out that the dairy sector was flourishing on account of good extension services.

“Look at the dairy sector, where we see the biggest cooperative and private sector firms thriving. Vijaya in Andhra Pradesh, Amul in Gujarat, Hatsun in Tamil Nadu and a few others in north India are all doing well,” Reddy said.

The CIFA chief adviser said that similarly in sugar, a cooperative mill in Gujarat was performing stupendously.

“Farmers supplying cane to the mill are paid 40-50 per cent higher than the fair and remunerative price (FRP) fixed by the union government,” he said, adding that Murugappa Group’s Parry and Company was another sugar firm doing well, helping farmers.

“It can be cooperative or private but there is enormous opportunity to allow others in extension sector,” Reddy said.

On the other hand, the CIFA chief adviser said that the Centre should also consider privatizing water distribution for irrigation.

“It can be handed over on a contract basis for five-10 years and see the difference it makes,” he said.

Reddy’s suggestion is that the government should supply water to the private firm at an agreed price through any sub-canal that can provide irrigation to, say, 10,000 acres.

“Today, hardly 6,000-7,000 acres benefit from irrigation through such canals that can irrigate 10,000 acres. My suggestion is that the water should in turn be supplied at a specified price to farmers. I am sure some water can even be saved by the private company and sold to others,” he said.

Reddy says that allowing a private company in providing irrigation would result in proper maintenance of supply channels by avoiding seepage and evaporation.

“Today, there is no proper control of water distributed for irrigation to the field. It results in a lot of wastage,” he said.

The CIFA chief adviser said that private supply of water for irrigation to farmers, say for Rs 200 per crop, would improve the efficiency in distribution.

Reddy said that Indian agriculture is facing a crisis the way industry and services sector faced before 1990.

“Liberalisation in 1991 freely allowed technology access besides investment. Today, we have defence arsenal from across the world that we can face any adversary, be it Pakistan or China. We need similar reforms in agriculture,” the CIFA chief adviser said.

Welcoming the agricultural reforms brought in by the Narendra Modi government through three acts of Parliament allowing farmers to sell their produce to anyone anywhere, enter into contract farming and removing limits on storage, Reddy said the Union government had in one stroke brought in opportunity for investment in storage and processing.

“These reforms will bring in the much-needed connectivity between processors and producers. It is typical of any act to have defects but these reforms, in general, are good. They will help in long-term contracts between the farmer and the industry,” he said.

Terming the issues raised by some farmer organisations as “totally unjustified”, Reddy said the country was witnessing “duplicity” and “double standards” from some quarters in opposing agricultural reforms.

“(Shetkhari Sanghatana founder) Sharad Joshi had wanted the reforms done in 1990s. M S Swaminathan called for reforms in 2014. It is farmers’ misfortune that they do not have a strong leadership. The Union government is having problems in communicating to the farmers,” Reddy said.

One way of communicating would have been to tell people what the farmers were demanding and the government’s response in a simple language that farmers understand.

“The government doesn’t seem to have done this. Ordinary farmers are gullible and they cannot understand. What have farmers to do with Essential Commodities Act? The government should reach out to them to tell them of the ground realities,” Reddy added.