Big On Words, Small On Allocation: Where Is The Money For Big Infra Upgrade Promised In Jaitley’s Budget? 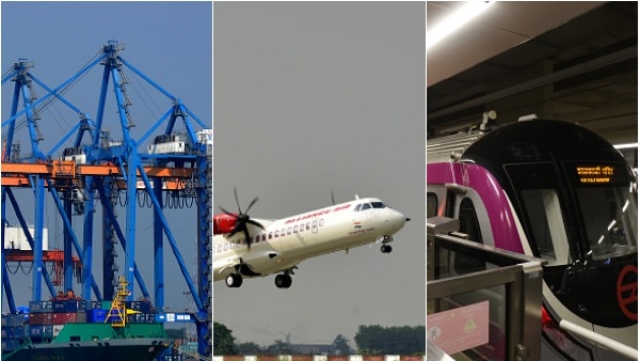 The word ‘ínfrastructure’ appeared 69 times in Finance Minister Arun Jaitley’s Budget day speech. So, one can be forgiven for thinking that the Union Budget this time was big not just on rural but also infrastructure themes. But reading the fine print of actual allocations shows that the seemingly big takeaways from Jaitley’s speech may be big only in words. Much of the funding for our roads, ports, airports and highways will have to come from private enterprise and then debt to be raised by various infra ministries – not from the Central government’s coffers. The vision is commendable but the government does not seem to have the money to fund its ambitious building blocks of the economy.

The Finance Minister said in his speech, “Infrastructure is the growth driver of economy. Our country needs massive investments estimated to be in excess of Rs 50 lakh crore in infrastructure to increase growth of gross domestic product (GDP), connect and integrate the nation with a network of roads, airports, railways, ports and inland waterways and to provide good quality services to our people. We have made an all-time high allocation to rail and road sectors. We are committed to further enhance public investment.”

What he left unsaid was that this commendable vision will still leave infrastructure projects at the mercy of private parties and debt since the government will not be funding most of these ambitious projects. Besides, the aam aadmi has not been spared either, since he too may be footing a higher bill through cess and other levies for creation of new roads, highways and airports.

There are two interesting observations from budgetary allocations and spending pattern this time. Analysts at ratings agency Crisil has said that:

1) States, not the Centre, now have a greater role in capital expenditure for creating productive assets. So while the states accounted for just over half or 56.6 per cent of total capital expenditure in 2013-14, their share this fiscal is expected to be 63.5 per cent. Put simply, this means states are shouldering almost two in three rupees spent on capex annually now.

2) The Union Budget places much higher dependence on IEBR (internal and extra budgetary resources). The share of IEBR in total capital spending in the economy is estimated at 61.4 per cent in 2018-2019, up from 47.4 per cent a decade ago. This implies the share of budgetary support has declined from 52.6 per cent to 38.6 per cent during this period – or from a little over half to just over a third. So the central ministries/departments are being increasingly left to fend for themselves.

Vinayak Chatterjee, Chairman of Feedback Infra, has asked in this tweet whether changes in infrastructure cess will mean extra burden for road users?

Anyway, the budgetary allocation of several infrastructure ministries has been slashed. According to CRISIL, Civil Aviation will get 41 per cent less, power 16 per cent less, shipping 3 per cent less and water resources down by about a third or 29 per cent less than the allocation in the RE of current fiscal. Gainers are Railways (up 22 per cent), and non-renewable energy at 9 per cent, Pradhan Mantri Gram Sadak Yojana and Road Transport and Highways.

Take Railways. Though allocation has increased, it doesn’t even begin to cover the requirement. CRISIL analysts said that Railways’ capital outlay has risen to Rs 146,500 crore but budgetary allocation stands at Rs 53,060 crore – at just about a third. Anyway, in the current fiscal, the government promised about Rs 55,000 crore budgetary support but will provide only about Rs 40,000 crore. So in effect, the allocation is even lower in {Budget Estimates (BE)} 2018-19 than in BE 2017-18. Reduced capital outlay affects plans on laying new lines and various other essential expenditure heads.

Next, airports. The government coined a new term ‘NABH Nirman’ for augmenting airport capacity in the Budget. But not a penny has been earmarked for this ambitious project, which is expected to build 100 new airports over the next 10-15 years at a cost of Rs 2 lakh crore. This is an increase in airport capacity by about five times to handle a billion trips a year. According to MoS Civil Aviation, Jayant Sinha, a major portion of the proposed investment should come from private investors rather than the government. Then, further money can be raised by leveraging the balance sheet of the Airports Authority of India (AAI), by issuing several types of bonds.

Since much of the infrastructure financing will happen through debt, is it easy for our ministries to raise money for ambitious projects? Analysts at ICRA noted in their comments on the Budget that deepening of bond markets is required to support long-term infrastructure financing, especially given the twin challenges faced by commercial banks – asset-liability management and increasing share of stressed assets.