Data Story: Despite Floods, Figures Show Sharp Decline In Rainfall In India Since The 1940s 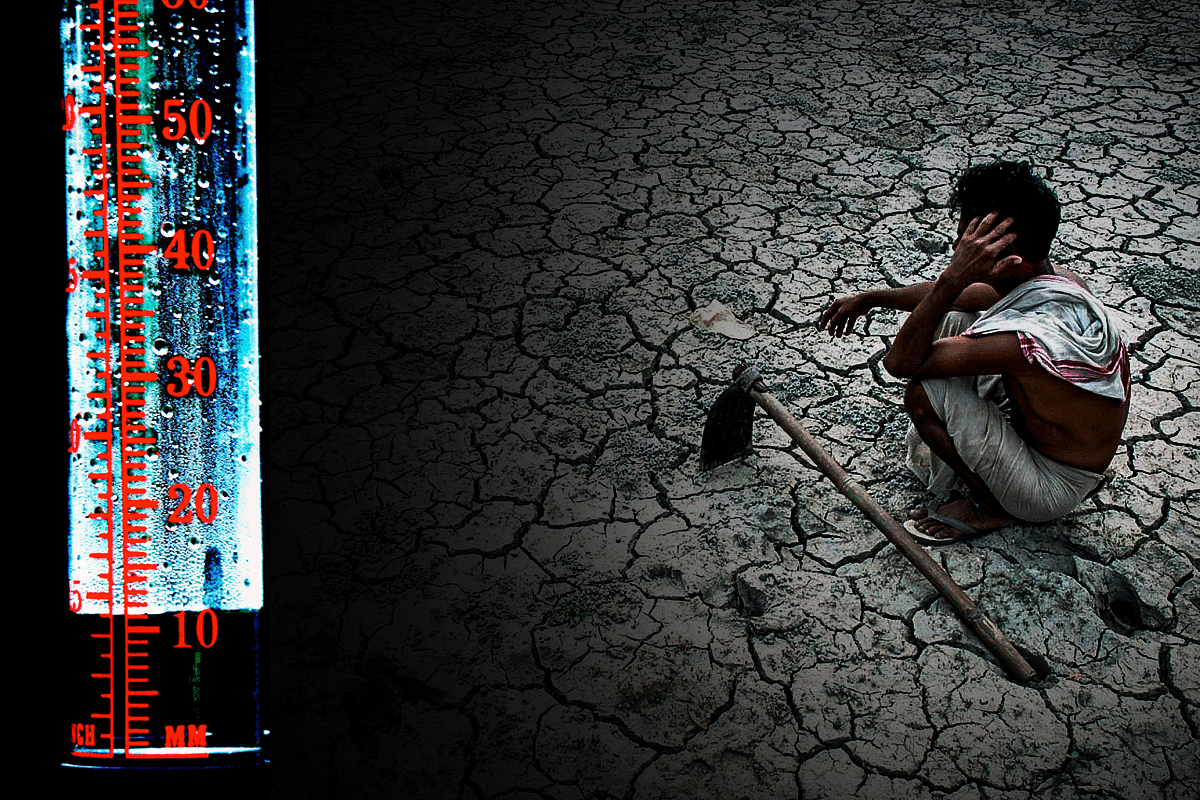 A rain gauge (left) and a farmer (right).

Heavy rains and floods in various parts of the country last year and this year have made big headlines this time around. But is India really receiving a bounty rainfall?

If data is to be believed, the answer is no.

A disturbing development in the last two decades has been that the country has been receiving lower rainfall during the crucial monsoon period of 1 June-30 September. The data that was available was viewed decade-wise and year-wise from 2001.

A comparison was also done with 1951-69, especially for July rainfall. The results showed that there is a sharp drop in rainfall that India has been getting in July, a crucial month for the monsoon since it peaks at that period, from the beginning of this century.

The data does not show any significant rise in annual August rainfall. In fact, the average rainfall in August every year shows a drop for the last two decades when seen decade-wise.

Data was also examined for post-monsoon and pre-monsoon rainfall and all indicators were negative — the amount of rainfall the country is receiving over the years is dropping.

The drop in post-monsoon rainfall is bad news for Tamil Nadu, Odisha and coastal Andhra on the east coast. These regions depend heavily on North-East monsoon starting 1 October and ending 31 December. Since 2001, only twice has the country had received rainfall in excess of 100 mm in October — in 2001 and 2013.

Since 1999, rainfall in November has exceeded 30 mm four times but topped 50 mm only once. The rainfall has never gone anywhere near the 1979 record of 76.1 mm for November.

Pre-monsoon rainfall during March-May is showing a downward trend over the last two decades. The best for pre-monsoon was 1980-89 when the country received nearly 150 mm average rainfall.

Interestingly, in May 1990, the rainfall received was a record 112.9 mm with parts of Andhra Pradesh such as Anakapalle being hit by a cyclone. A higher rainfall in May could also mean that the monsoon had set in early that year.

Why has the amount of rainfall that India has been receiving dropped? There can be two reasons for the drop in the annual rainfall.

One, a decrease in forest cover from the 1960s to at least early this century.

According to the Centre, dense forest cover in the country has increased to nearly three per cent of the country’s geographical area compared with 1.56 per cent in 2003.

But the government data is being disputed by experts who point out to the decline of nearly four per cent in forest cover in the Western Ghats in recent years. One of the reasons for the floods and damages in Kerala’s Idukki and Wayanad districts last year and this year was due to loss of forest cover, they say.

Besides, the average global temperature increased between 0.5 and 0.74 degrees Celsius during the last century, while the sea level has gone up by 10 to 25 centimetres in the last 100 years.

No study has been done linking the Indian monsoon with global warming or the rise in sea levels. Though the amount of rainfall has dropped, India’s agricultural production hasn’t been affected thanks to farm modernisation, better irrigation practices and use of quality and hybrid seeds.

However, the long-term effect will have to be seen closely. That Indian agriculture’s contribution to Gross Domestic Product (GDP) has dropped below 3 per cent in the last couple of years is an issue of concern, and this may require deeper monitoring.