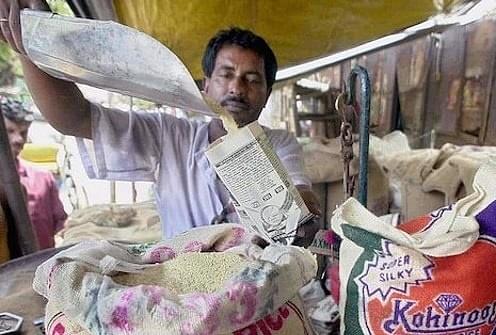 Kuppuswamy irons clothes to make a living and lives in a low-income locality in the Lawspet area of Puducherry. He has not been getting arisi kaasu (rice money) that he is supposed to get every month in lieu of the subsidised rice from the ration shop from September onwards. He wants to revert to the old system of getting rice through ration shops. So do Vijaya and Shanta, who work as domestic helps and live in the Karuvadikuppam locality a few kilometres away, and their neighbour, Bhaskar, who runs a cycle repair shop.

Vijaya and Shanti got only one instalment of money, while Bhaskar has been getting money regularly. So why does he want to go back to the old system? The money isn’t enough, he says.

But when they come to know that a return to the old public distribution system (PDS) will also entail a return to the yellowish rice they used to get, their opposition to cash transfers starts wavering. They ask, can’t we get the single-boiled rice instead?

Under the NFSA, AAY card holders continue to get the same quantity at the same price, while non-AAY card holders get five kg rice per person on a card at Rs three per kg. Just a month short of a year since the cash transfer, in lieu of subsidised ration pilot scheme, kicked off in Puducherry (along with Chandigarh), the beneficiaries are split over support for it. Those who are not getting money would like to return to the old PDS while those who are getting money are in two minds. Those who want the cash to continue have an edge.

There is near-total unanimity on only one issue— no going back to buying the FCI rice. “Who can eat that rice, we used it only for idli and dosai,” is a constant refrain. Of the 50-odd people across four localities that this writer met, only two women who were not getting their arisi kaasu were categorical that they wanted to revert to the old PDS even if it meant getting the FCI rice.

Indeed, it was this popular rejection of the FCI rice that made the Puducherry government agree to be part of the central government’s cash transfer pilot. Officials at the Puducherry Fair Price Shop Employees Cooperative Society (PFPSECS), which owns 435 of Puducherry’s 505 ration shops, said that they lifted less than half of the quantities assigned to them and even then ration shops were left with large, unsold stocks at the end of the month. The Union Territory’s Civil Supplies Department confirms this.

Last year, the central government wrote to the states/Union Territories asking them about participating in experiments in delivering food subsidy. They were given three choices:

(iii) an outright cash transfer instead of subsidised food grains

Puducherry’s then Chief Minister, N. Rangaswamy, very pragmatically opted for the third. “Why waste rice if people are not buying it, give them cash and let them buy what they want,” he is understood to have reasoned.

And so the pilot programme rolled out in September and families got the cash equivalent of their entitlement under the NFSA. This has been set at Rs 24.05 per kg (the procurement price of rice multiplied by 1.25 minus Rs three, which is the selling price of rice under the NFSA). So non-AAY card holders get Rs 120.25 per family member while AAY card holders get Rs 841.75 per card.

This is not Puducherry’s first experiment with cash transfers. In November 2014, the Rangaswamy government had attempted a pilot— each card holder was given Rs 300 in lieu of the 10 kg free rice. But strong popular opposition saw it being abandoned in less than three months. Not only were there problems in transmitting the cash but people found that the money was not enough to buy the same quality rice in the open market. “We could have addressed the money transmission issue with time, but people were adamant on getting this rice through ration shops,” says P. Priytarshny, additional Secretary (cum) Director, Department of Civil Supplies and Consumer Affairs.

There are hiccups in the actual implementation of the central government pilot. Several people complained about not all family members being covered. Civil Supplies Department officials say that this is unlikely since the beneficiary list and PDS operations in Puducherry have been fully computerised for three years now; the discrepancies, they reckon, could be because of deletion of names (because of deaths or a family member moving out) that may be updated in the official records, but are not reflected in the ration cards. The actual transfer of cash into individual bank accounts is also not smooth. This writer met several beneficiaries whose bank accounts showed no entries for the cash transfer or erratic payments; though there were quite a few instances of money coming in regularly.

The administration admits there are more than a thousand failed transactions every month, starting with over 6000 in the first month (September 2015) to over 2000 in May 2016. Unfortunately, the administration comes to know about failed transactions and the reasons quite late. “There have been 18,000 failures since September; it has taken us months to know the reason. Without knowing why they failed, how can I rectify the problem?” asks Priytarshny.

In one case, the administration found that money had been going regularly into a Grameen Bank account of a beneficiary though he kept complaining of not having got it. He was unaware of this and was checking the account which he had informed the Civil Supplies Department about. This is a problem related to the Public Finance Management System-National Payments Corporation of India interface where the money goes into the account that is the latest to be seeded with Aadhaar, without the knowledge of the beneficiary. “People should have the liberty to seed whichever account they want,” points out Priytarshny.

To the administration’s credit, it has been extremely pro-active in addressing the issue. The Civil Supplies Department has identified 18,000 cases and contacted them through the ration shops they are attached to. They have been given letters addressed to their respective banks asking them to ensure that the bank accounts are seeded with Aadhaar. The convenor of the state-level banking committee has been told to tell banks to tackle this problem.

In addition, ration shops have been given a form with a list of beneficiaries with missing details like Aadhaar number, bank account details and IFSC code and asked to fill them up. This, it is hoped, will plug the problem of missing beneficiaries.

How successful this exercise is remains to be seen.

Part II will deal with how Puducherry’s public are responding to the programme and lessons for the future.

Modi’s DBT Review 2: Teething Troubles Can And Must Be Addressed Urgently