Digital India Speeds Up, But We Thank Mukesh Ambani As Much As Modi 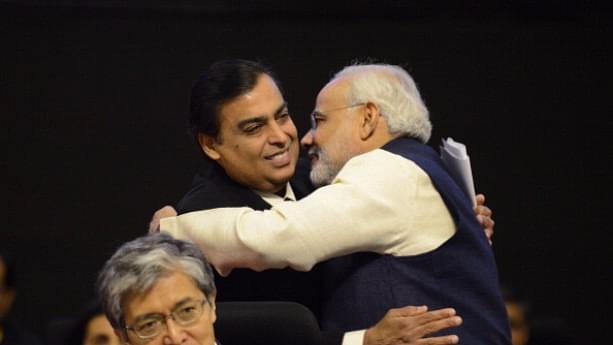 In August 2016, our total mobile data consumption stood at 20 crore gigabytes (GB) per month. Today, it stands at 150 crore GB per month, a stunning rise of 650 per cent.

No less stunning is the rise of 83 per cent in the number of total wireless broadband subscribers – from 15.4 crore at the end of August last year to 28.2 crore in June this year.

In the past one year, average data tariff costs have come down from Rs 250 per GB to Rs 50 per GB. This means that if you are consuming 5 GB of data per month, you are effectively saving Rs 1,000!

There were 4.7 crore smartphones in March last year. This March, the number has sprung up to 13.1 crore. Activation of a SIM card would earlier take one to three days; today, it takes only 15 minutes. (Economic Times report)

Sounds like a great year for ‘Digital India’. But we have billionaire businessman Mukesh Ambani to thank and not just Prime Minister Narendra Modi for these astonishing achievements despite the fact that it was the latter who launched ‘Digital India’ in July 2015.

If the last year is any indication, Ambani’s Jio initiative is running up the score on Modi’s Digital India programme. Of course, it is no one’s case that Jio’s splendid feats haven’t come at a price. In fact, they have come at a great cost to the company, as this Mint report shows.

If it plans to milk the existing base of 80 million customers (as of end-April), then average spend by each customer needs to be as high as Rs 550 per month to achieve break-even at profit before tax (PBT) levels. With flagship voice plus data plans of incumbents around the Rs 350 levels, this is out of the question. But let’s say Jio settles for an Arpu (average revenue per user) that falls between its discounted tariff of Rs 100/month and the full price of Rs 309/month. In that case, its subscriber base needs to grow about three times from end-March levels to 215 million. That’s a a fairly tall order, but not impossible.

Reliance Jio’s entry into the market has affected existing players so much that they are now seeking a bailout. Though high-spectrum costs deserve the lion’s share of the blame for the crisis in the sector, Jio’s disruptive tactics have helped exacerbate the financial woes of the incumbents.

One report said that Jio’s free lunches have caused 20 per cent damage to the industry.

Be that as it may, Ambani has delivered in spades when it comes to putting India on the fast lane towards a digital future.

The question we need to ask now is, what happened to the government’s scheme? And is it still relevant?

The answer to the second question is unequivocally in the affirmative. Most of the optical fibre cable network that private telecommunications players have invested in is skewed towards serving urban Indians, as is reflected in the number of urban (27.6 crore) and rural internet users (11.5 crore). Currently, we have around 45 crore internet subscribers, only half of whom access it via high-speed broadband.

There are huge benefits to be reaped by connecting the unconnected. Private telecom players are too indebted (to the tune of Rs 4.8 lakh crore) to invest in infrastructure needed to do this. Other factors such as a lesser population density (hence, a low return for high investment in infrastructure) and higher operational costs are significant barriers.

That is why Modi government’s ‘Digital India’ project matters.

The programme was launched in New Delhi in 2015 by Prime Minister Modi in his typical style – a big event and lots of excitement. Many India Inc leaders lauded the initiative and promised to invest their monies. And there was a tonne of marketing around the campaign before and after the event. Voicing their support, thousands of people even changed their profile pictures on Facebook, including the company’s founder and chief executive officer Mark Zuckerberg. It was a class act in event management and a case study for governments in how to market schemes to the public.

Digital India was envisaged as a programme which will stand on a digital infrastructure foundation, which the government would then leverage to strengthen governance through technology, deliver services electronically, create a public data architecture available on demand and, at last, promote electronic manufacturing and create jobs in small towns by enabling faster connectivity.

Digital infrastructure, the foundation of the programme, was key to its success. It had three important components – laying the broadband highways, making universal access to mobile connectivity a day-to-day reality with special focus on the North East and areas affected by left-wing extremism, and establishing common service centres in every gram panchayat so that the government’s services come to the people and not the other way around.

Of the three, the most important, the most expensive and one where the government has to do all the heavy-lifting is, of course, the broadband highways, which involves installing physical infrastructure in the form of fibre optic cables. While launching Digital India, Modi had talked about his “dream of a digital India where high-speed digital highways unite the nation”.

An initiative, National Optic Fibre Network (NOFN), was started under the United Progressive Alliance (UPA) government in 2011. The aim was to connect 250,000 gram panchayat (GP) offices which serve over 640,000 villages. A new public sector enterprise, Bharat Broadband Network Limited (BBNL), was created to finish the project in two years. But by 2015, the programme had achieved only 1 per cent of its targets.

The Modi government rechristened the NOFN initiative as BharatNet and decided to execute it in two phases. Three state-run agencies, namely Bharat Sanchar Nigam Limited (BSNL), RailTel and Power Grid Corporation of India Limited (PGCIL), were entrusted with laying the optical fibre cables (OFC). Over 1 lakh GPs were expected to be completed by March 2016, but this target was only achieved recently – after a year of delay.

NOFN, without a shred of doubt, is the single most important building block of Digital India. Without it, the government’s programme will fail to materialise.

Though the government was supposed to get here by March 2016, in retrospect it seems to have punched way above its weight. Doing this in two years is commendable. Now, Phase-2 covering the remaining 1.5 lakh GPs needs to be kick-started soon so that it could be achieved by the end of this government’s tenure.

However, there are two big issues that the government needs to address at the earliest. First, though the fibre cable has reached more than 1 lakh GPs, the number of active GPs is very low. As of 25 August, only 27,030 GPs have gone live.

Second, the pace of laying fibre cables also seems to have slowed down. When Swarajya reviewed the progress of BharatNet in December last year, 1,418km of fibre cable was being laid every week. It has now slowed down to 971km per week.

The speed of laying OFC pipe has also gone down drastically, from 2,766km per week to 615km per week now. This doesn’t portend well given the deadline is only two years away, and almost 50 per cent more work needs to be done than was achieved in the last two years.

Warts and all, the first pillar of the “digital infrastructure layer”, i.e., broadband highways via OFC, is being executed at a good speed. It’s the second pillar, universal mobile connectivity with special focus on the North East, that is not going as intended.

Within months of coming to power in 2014, the Modi government had announced its intention to ramp up telecom infrastructure in the North East. Thousands of crores had been allocated towards the same, but implementation has not taken off thanks to flawed policy execution and a lack of co-ordination, as reported by Financial Express.

In the first phase, the telecom department had entrusted BSNL with installing 2,817 telecom towers in 4,118 villages, mainly in Assam and Arunachal Pradesh, at the cost of Rs 975 crore. However, one year of delay in awarding tenders has led to cost overruns, taking the total cost to Rs 2,386 crore.

The second phase was supposed to cover the rest of the North East, and private players were expected to take the lead. However, no one seems to be interested except Airtel. Delays in awarding contracts in this phase have made the project costlier by Rs 1,579 crore.

The third pillar involves setting up common service centres (CSC), or digital kiosks, in all of the 2.5 lakh GPs and make post offices double up as multi-service centres. This is gaining pace. The number of CSCs has tripled since 2014, from 83,000 to 2.5 lakh now. The government intends to deliver various services such as voter identity cards, utility bill payments, Aadhaar, PAN cards, online ticket booking and so on via these kiosks so that people in villages don’t have to travel far to get things done.

By removing the middleman, it also hopes to deal a blow to rent-seeking and corruption activities at the lowest levels of government service delivery.

It’s a mixed picture so far. If the Modi government succeeds in fixing these three pillars, thus laying the foundation for a digital infrastructure, it will not only be able to do what it is aiming for but will unlock massive possibilities where local entrepreneurs will use that infrastructure to do things we may not be able to envision today.

Ambani or Modi, who is contributing more is not an either/or argument. The efforts of both on this front will complement each other rather than being mutually exclusive.