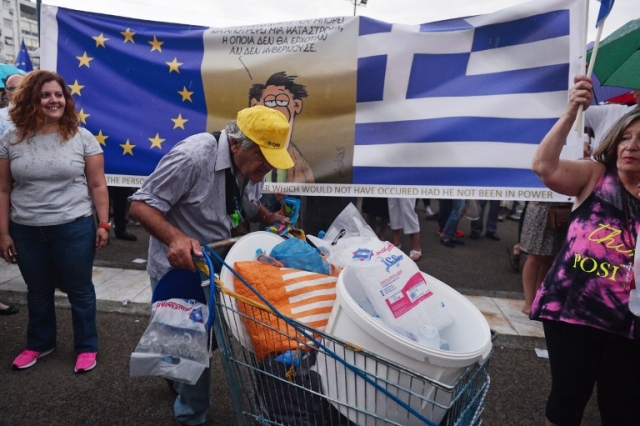 A lot has been written about Greece recently. Unfortunately most experts have narrowed their analysis only to Greece overlooking the broader economic problem that persists in the entire European Union (EU).

Greece is only a symptom; Euro is the disease!

The EU is not an economic union; it is a political project that attempts to hide under its shiny hood some pretty bad economics. The demise of the Euro was inevitable and worse is yet to come.

The origins of European cooperation had classical free market vision. Free movement of goods and services, capital and labor – created a single European market. It worked well. Individuals and companies were free to take advantage of economic opportunities across Europe, irrespective of political boundaries.

Where it went wrong was the desire to create a centralized European super state. This was not driven by economics or any desire for efficiency, but a series of steps towards a political union.

In Europe, the largest and strongest economy has been Germany. And Germany had a very strong independent central bank called Bundesbank. Set up after two disastrous episodes of hyperinflation (1923 and 1948) Bundesbank had a clear mandate to curb inflation. Similarly, the German people are inflation averse and any attempt to inflate the money would be politically unpopular.

But countries like France, Italy, Greece had much lower levels of fiscal discipline and hence had higher levels of inflation and currency devaluation with respect to the Deutschemark.

Leaders in these countries found it easier to blame the Bundesbank rather than reform their own systems. They kept insisting that Bundesbank print more marks and join them in the “Inflation game”.

In 1979, European leaders formed the Exchange Rate Mechanism (ERM), which aimed at restricting currency exchange rates to a small band. Since they did not stop printing money, this meant that every time there was a threat of depreciation (say for the Spanish Peseta), the central bank had to intervene and buy Pesetas using its hard currency reserves.

This obviously was not sustainable. A classic example is England, which, in 1992, had to leave the European Monetary System (EMS) after failed attempts to defend the British Pound.

Unsurprisingly the European leaders learned the wrong lessons from this too. Incensed by what they say as a refusal of the Bundesbank to back their currencies, they plotted to get rid of the Bundesbank itself.

A common currency would require a common monetary policy. Since monetary and fiscal policies go together it would imply a common fiscal policy, similar levels of deficit and government debt. That was not the case; Bundesbank and many economists resisted the Idea.

In fact, the Bundesbank set strict conditions, which they felt, would not be accepted. Unfortunately, the politicians accepted all the conditions and then choose to violate them with impunity.

What were those conditions?

All member countries would

– Maintain a fiscal deficit of under 3% of GDP

– Total government debt at under 60% of GDP

– Interest rates maintained band of 2%. Highest interest rate will be 2% above minimum rate

These conditions were agreed upon in the Treaty of Maastricht. If all countries had followed these conditions, we essentially would have all Europe becoming fiscally responsible like Germany and the European Central Bank (ECB) would have functioned like the Bundesbank.

But, in the case of most countries, the leaders were too used to fiscal profligacy. The EU failed to agree on mechanism for enforcing these conditions. For example, automatic sanctions were discussed and rejected.

The conditions stated above were the ideal. Let’s look at what actually happened.

Belgium and Italy were allowed to join despite having debts > 60%. Several countries achieved the criteria only for the year 1997, which was the year considered for admission into the monetary union.

Several countries managed to fulfill the conditions only because the interest rates fell (in anticipation of the monetary union) which reduced debt burden. Later, the conditions themselves were diluted allowing countries to exceed 3% fiscal deficit for various reasons – falling GDP, natural disasters and unemployment.

The enforcement idea was a non-starter. Till date no country has been penalized for violating the conditions.

The ECB, which was meant to be a replica of the independent Bundesbank, became a tool of the EU.

Due to anticipation that the ECB would be like the Bundesbank and that the strict entry conditions would be followed, interest rates tumbled across Europe. Governments used the cheap liquidity to finance their spending while people and companies went on a consumption spree.

As the supply of easy money increased beyond productive uses, a lot of the money went into a creating a real estate bubble.

Governments after joining the monetary union, went back to their merry ways of printing and spending money, now with the added advantages of cheap borrowing. Why cut government expenditure or raise taxes to balance your books when you can borrow and spend?

In a regular country, borrowing and spending would lead to high inflation, currency devaluation and resultant political backlash. But here, since there was a common currency, the negative effects were shared by all the EU nations (any inflation or Euro devaluation affects all members).

In effect, the consequences were externalized. This created a perverse incentive, where those who borrow more benefited at the expense of the disciplined.

And on the trade deficit, since a common currency ensures that no country can devalue its currency and raise export competitiveness, the trade imbalance never got corrected. Countries like Germany kept piling up trade surpluses while countries like Greece kept piling up deficits financed by borrowings – ironically a majority of them coming from savings of the Germans.

Greece joined EU in 1999. There are claims that the Greece met the criterion by manipulating figures. While that is yet unproven, the fact is that Greece was and is not  a competitive economy with low levels of economic freedom and low worker productivity.

Greece hid its real debt by using complicated instruments, which kept debt ‘off the books’. In the wake of the global financial crisis in 2009, an estimated 6-8% deficit was suddenly revised to 12.7% (and later to 15.7%).

Greek industry was  not competitive, and wages too high, leading to high unemployment. Governments responded by increasing public sector employment and welfare benefits.

Take a simple example. They reduced the retirement age so that unemployment numbers could be brought down. To persuade people to retire early they offered phenomenal pension plans and benefits. Greece had pensions at 80% of average wage levels compared to 46% for the Germans. Additionally, it had 14 months pay for 12 months work and paid vacations.

Once the real levels of deficit and public debt were known, IMF stepped in. The ECB, which was accepting Greek bonds as collateral, now started directly buying bonds. The rest is well known.

Lessons to be learned

Governments can and do force banks to lend to them and create money to finance their spending. In a normal case, the correction comes from higher interest rates that affect growth as well as inflation that costs votes.

In the case of the Euro, the negatives got externalized to the Euro Zone, creating a perverse incentive for spendthrift governments.

Very importantly, the political prestige staked on the monetary union did not allow any space for a course correction. In a political landscape, where leaders staked their reputation on the monetary union, accepting that the idea was flawed wasn’t possible. Hence, there was an implicit (later made explicit) guarantee that countries will not be allowed to exit and that bailouts will happen. This guarantee allowed banks to keep financing Greece knowing that in case of default, ECB will step in.

After getting elected on anti-austerity platform, Alexis Tsipras accepts almost all the conditions that he had sworn to reject. But does it solve any problem? Not really.

Why am I so pessimistic? For one the core problems in the Euro project as explained above remain. But specific to Greece –

—Austerity measures, while necessary, do not solve the fundamental problems of the Greek economy. None of the measures really is about productivity, innovation or entrepreneurship.

—Tax increases, in an economy where tax avoidance is a national past time, are unlikely to work. Unless you widen the base, any hike hits the honest.

—The Troika has zero trust in the Greek government’s ability to deliver. They have and will insist on checks and guarantees like the ‘privatization fund’ which will hold Greek assets to be privatized (About 2/3rd has to go for debt reduction and can’t be touched for any other purpose).

—Last and perhaps the most important, neither Syriza nor the Greek people really believe that these austerity measures will work. I expect they will go through the motions, look for loopholes and any implementation will be halfhearted.