From Farm To Fork: Why Onion Prices Doubled For The Consumer At Retail Outlets 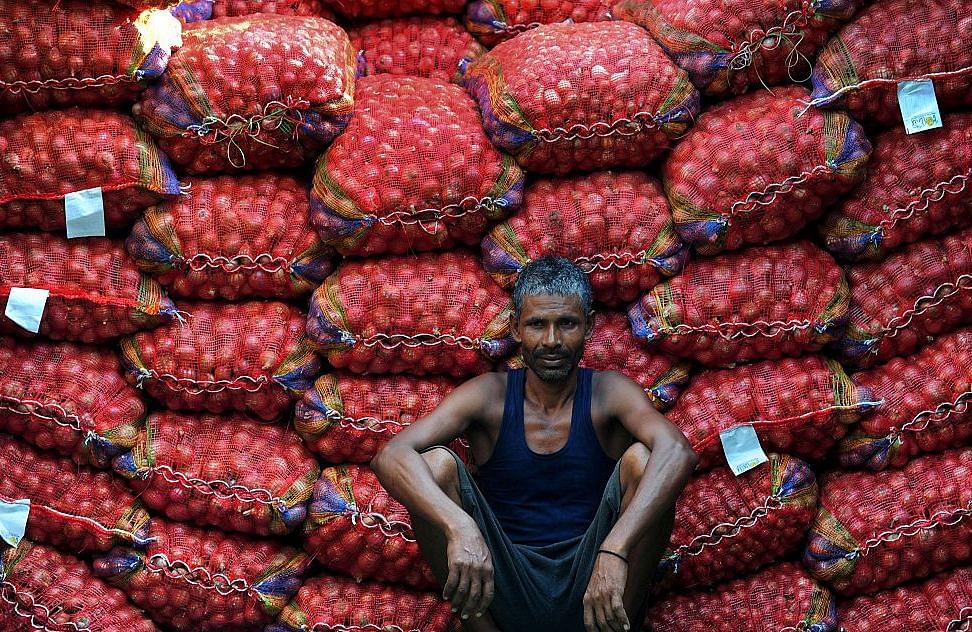 Onion prices have crossed Rs 100 a kg in some states. (Sanjay Kanojia/AFP/Getty Images)

One of the most intriguing aspects of the current spell of a surge in onion prices is that when the vegetable reaches the retail outlet, say Chennai or Bengaluru, it costs nearly double what it costs at the Agricultural Produce Marketing Committee (APMC) yards near the growing regions.

For example, the modal price -- the rate at which most of the trading takes place -- of fair average quality (FAQ) onions at Lasalgaon APMC, one of the hubs for onion trade in the country, on 6 December was Rs 68 per kg.

On the same day, retail prices of onion in Bengaluru quoted at Rs 135 per kg, while in Chennai it ruled at Rs 150 per kg. In Hyderabad, prices touched Rs 180 per kg at retail outlets and in Thiruvananthapuram they were Rs 110 per kg.

Another interesting aspect is that retail prices in Chennai and Bengaluru showed a mark-up between Rs 20-45 per kg compared with the wholesale prices.

Assuming that the onions that sold in Chennai, Hyderabad or Thiruvananthapuram were bought in Maharashtra in the last week of November, then their prices were nearly double at retail outlets compared to the APMC yards or mandis.

No doubt, onion prices have surged to record prices in the country as standing crops were damaged in onion-producing states such as Karnataka, Madhya Pradesh, Gujarat, and Maharashtra due to heavy rains and floods during September and October.

The rains, under the influence of Cyclone Maha, extended till the first week of November and have even damaged transplanted seedlings of onion crop in Maharashtra.

Data sourced from the National Horticultural Research and Development Board show that onion arrivals during the October-November period were the lowest in the last 10 years. Hence, it was no surprise that prices galloped to record levels across the country.

However, the searching question behind the surge across the country is: why are prices at the retail level double that of the prices at the APMC yards?

To explain the point further consider, for example, the modal price of onions at Lasalgaon on 22 May this year; it was Rs 10 per kg. At Chennai retail outlets, it translated to Rs 22-24 per kg a week later and to Rs 20/kg at Bengaluru outlets.

May was the time when the rabi (winter) onion crops were arriving in the market. Consumers in Chennai and Bengaluru were then paying an additional Rs 10-12/kg for onion at retail outlets, compared with prices at APMC yards.

So, why are consumers now having to pay an additional amount of more than Rs 60/kg over the APMC yard rates? Couldn't they have paid less than Rs 100 for a kilogram of onions considering that its APMC prices have not topped Rs 80/kg throughout the current period of shortage?

This is not the first time that such a thing has happened. Even during 2010, when onion prices surged to above Rs 100 at retail outlets, such a phenomenon was witnessed. There is a "special" reason for this.

In its “Competitive Assessment of Onion Markets In India”, the Competition Commission of India (CCI) in 2012, dwelling on the spike in food inflation during 2011-12, said without retailers mark-up, onion prices would have been Rs 40/kg.

The 2012 assessment, done for the CCI by Agricultural Development and Rural Transformation-Centre Institute for Social and Economic Change, Bengaluru, said: “speculative traders made super-profits by fixing prices in onion trade even as the Government was playing with ad hoc fixes.”

In particular, it said wholesale traders in Delhi bought onion at Rs 34/kg and at retail outlets it ruled at Rs 80/kg, leading to a margin of 135 per cent.

Then, the assessment said, consumers in Bengaluru alone could have been fleeced to the tune of Rs 10.5 crore a day.

A study conducted by the Multi Commodity Exchange (MCX) on the spike in prices of tur (pigeon pea or arhar), chana (gram) and other pulses in 2009 came up with yet another interesting finding.

According to its study, when the Indian Meteorological Department (IMD) declared in June 2009 that the rainfall during 2009 South-West Moonsoon would be 16 per cent lower than normal, the price of pulses immediately surged at 33 per cent.

The reason for this “volatility premium” is that traders who are sourcing, or who handle, these products look for a higher margin, often taking advantage of the emerging shortage scenario.

Prices and premium surge alarmingly when there is a lack of substitute for these products. Onion is witnessing such a phenomenon.

Another study by MCX on prices at farmgate and retail outlets revealed that for some commodities like wheat, the produce changes over a dozen hands.

While the produce changes hands from one trader or person to another, there are cases where it is passed on without any value-addition being done. The study concluded that this was one of the reasons why retail prices are double that of farmgate rates.

The study also reported a reverse co-relation with the prices of chana. While prices dropped at the farm level, they increased at retail levels.

Even in the 2012 assessment, the CCI said that retailers in metro cities exhibited a strong rigidity in holding prices to earn margins between 60 and 100 per cent even after prices began dropping in wholesale markets.

Experts, who have studied the movement of agricultural produce, say that one of the best ways to control such spikes in prices would be through constructing storage facilities.

Transparency in prices at different levels would also help rein in any surge. Probably, even starting futures trade in onion can help to check the surge in its prices.

Constructing more cold storage for onion will help farmers to store their produce. The farmers should also be extended the facility of getting a warehouse receipt for their produce so that they can pledge it for immediate fund requirements.

This would prevent any distress sale of the onion by farmers, as it had happened last year when they had to settle for unviable prices.

The CCI, in its 2012 assessment, also suggested allowing more private players besides allowing investment in retailing, storing and strengthening the information dissemination system to check such inflation.

The current spike in onion prices probably requires the government to look more closely at the farm-to-fork chain which seems to be the primary villain of the over Rs 150 per kg rate that the consumer is having to pay.