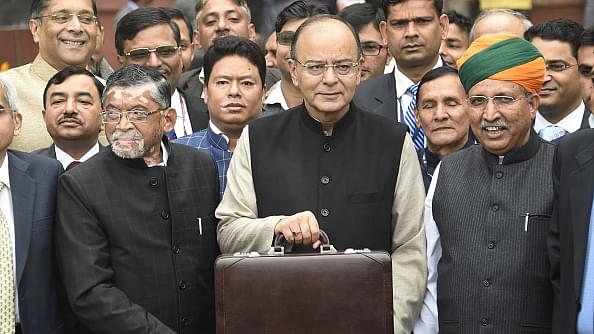 Finance Minister Arun Jaitley has earned kudos for sticking to fiscal consolidation targets, if not bettering them.

In his first budget, he kept the fiscal deficit target at 4.1 per cent, which was actually set by his predecessor P Chidambaram, even though he was widely advised to ignore it. In 2015-16, he stuck to the budgeted fiscal deficit of 3.9 per cent and has done the same this year – the revised fiscal deficit is at the budgeted 3.5 per cent. The fiscal deficit for 2017-18 was supposed to be brought down to 3 per cent, but not many are grudging Jaitley for keeping it at 3.2 per cent, a small slippage in the wake of a huge shock to the economy is seen as acceptable.

But, given the demonetisation shock in the third quarter of this fiscal, how has Jaitley managed to keep to the deficit targets? And will his assumptions for the next fiscal hold?

Fiscal consolidation targets have generally been met by tilting towards expenditure compression. That does not appear to have happened this time around. In fact, there has been a slight increase of 1.8 per cent in total expenditure between the budget and revised estimates.

The fiscal consolidation this year has, commendably, been revenue-led; the space for extra spending came from a growth in indirect taxes. The revised estimates of excise collections are 21 per cent higher than what was budgeted last year; the increase is 7.1 per cent in the case of service tax.

But some quibbling is in order. What about the quality of this increased expenditure?

One will have to wait, however, till the actual numbers for the whole fiscal come out at the end of April. Because the monthly account statistics put out by the Controller General of Accounts appears to be telling a slightly different story.

This shows that the revenue-capital mix was 88-12 as of 31 December. It also shows that in the April-December period, there was a 14 per cent increase in revenue expenditure and a 3 per cent decline in capital expenditure. Can there be such a marked improvement in the quality of spending in the last quarter of this fiscal for the budget numbers to be right?

Correcting the skew is not going to be easy. A huge chunk of revenue expenditure is committed and cannot be cut back easily. Interest payments, which alone are a quarter of revenue expenditure, gobble up 34 per cent of revenue receipts. There can also be no cutting back on salaries; the Seventh Pay Commission award has only increased this burden. The only elbow room available is on subsidies and this government has managed to put a lid on this. Runaway growth in the subsidy bill is a thing of the past.

Part of this is because of the windfall of declining global oil prices; so it was possible to contain both the petroleum and fertiliser subsidy bill down. But credit has to be given to the government for using the low global prices to tweak the subsidy regime. Petrol and diesel are deregulated, so now only LPG and kerosene are subsidised. The 'giveitup' campaign on LPG subsidy has seen a fair amount of success; the revised estimates of LPG subsidy are actually 14 per cent lower than the budget estimates. The revised estimates for kerosene subsidy is, however, 23 per cent higher than what was budgeted and there’s no ready explanation for this in the budget documents. But Jaitley has spoken about taking the country gradually to a kerosene-free state and one has to wait to see how this pans out. Overall, the petroleum subsidy bill is down 5 per cent between the budgeted and revised estimates of 2016-17, and is slated to drop by another 9 per cent in 2017-18.

The fertiliser subsidy bill has also been contained not just by falling oil prices but also the push for neem-coated urea (which reduces consumption). There has been no increase in this in the revised estimates nor is it budgeted to increase in 2017-18.

Getting rid of the food subsidy is not an option politically, but there was almost no change on this account between the budgeted and revised estimates, though a 7 per cent increase is expected in 2017-18.

He has planned for an improvement in the quality of spending; capital expenditure is set to increase 10 per cent and revenue expenditure only 5.9 per cent. The revenue-capital balance is slated to improve to 85-14. One will have to wait one more year to find out if this actually happens; it will be great if it does.

The fiscal outlook for 2017-18 sees a 12 per cent growth in taxes, with income tax collections set for a 25 per cent increase. This is after the tax giveaway of Rs 15,500 crore by halving the lowest tax slab. Jaitley is perhaps banking on increased compliance – voluntary or under pressure thanks to improved detection tools.

Corporate tax is expected to increase 9 per cent and indirect taxes by 8.8 per cent (with customs and service tax growing 12 per cent and 11 per cent respectively and excise 5 per cent). The Medium Term Fiscal Policy Statement says it expects demonetisation to spur an increase in the size of the organised sector, leading to a widening of the tax net. It also expects the economy to bounce back with increased spending. This is in line with Jaitley’s stand that the effect of demonetisation will not carry over into 2017-18, but the Economic Survey authored by the chief economic adviser was not so optimistic.

That is one imponderable which could throw the maths for the next year out of kilter. On the expenditure front, with global oil prices hardening, the petroleum subsidy bill could rise again unless there is serious effort to prune the subsidy bill through limiting whatever subsidies are still there.

Jaitley certainly will need a lot of luck to meet his fiscal consolidation targets for the coming year.