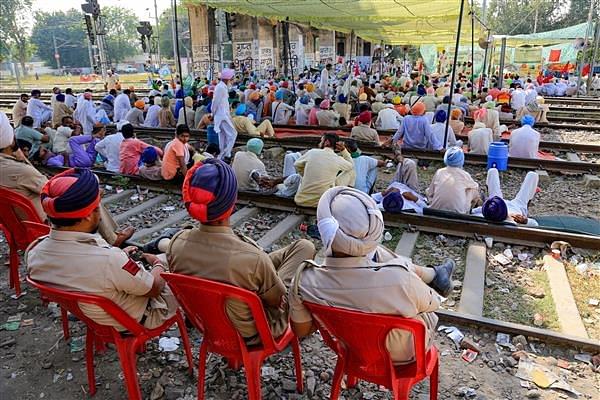 The Narendra Modi government’s agricultural reforms, through the passing of three crucial bills in Parliament in September this year, are facing stiff resistance in Punjab.

While the Trade Act allows farmers to sell their produce to anyone anywhere in the country, the Price Assurance Act allows contract farming with the laws framed favouring the growers. In fact, the contract has to be in a language the grower can understand.

The Essential Commodities Act amendment removes the storage limit on various commodities and will thus enable growers to sell their produce without any worry during peak harvest period.

The reforms were brought in by the government as part of its economic measures to tide over the impact of novel coronavirus pandemic under the Atmanirbhar Bharat Abhiyan.

Various other agricultural experts and economists have welcomed the reforms, though political parties such as the Congress and Shiromani Akali Dal, which quit the National Democratic Alliance (NDA) in protest against the reforms, have opposed these for their own reasons.

“Congress, Akali Dal and Nationalist Congress Party could lose their hold in rural areas if these agricultural reforms bring in the desired results. Some of their leaders have a strong influence on agricultural produce marketing committees (APMC) mandis. They would be affected by these reforms which promotes the concept of ‘One Nation, One Market’,” said an agricultural marketing expert, who did not wish to be identified, from Mumbai.

Fears that APMCs will be abolished, that the Centre will discontinue the policy of fixing minimum support price (MSP) for key kharif and rabi crops and that central procurement of food-grains will end have been raised by the government's detractors.

The government has clarified that APMCs will coexist with the new marketing platforms that will come up because of the reforms. It has come forward to give in writing that the MSP will not be done away with and assured that procurement of food-grains will continue.

Despite this, farmers, mainly in Punjab and to some extent in Haryana, do not seem to trust the Union government.

They are now staging protests since 27 November on the borders of the National Capital Region seeking repeal of the three reform laws. The Union Minister of Agriculture has held six rounds of talks with the farmer organisations but the deadlock continues.

“Farmers in Punjab, particularly, have been pushed to the fore to agitate against these reforms while arhatiyas (commission agents) are hiding behind them,” says Raj Narayan Gupta, a flour mill owner from New Delhi.

“Arhatiyas are playing football with the farmers in Punjab. The State government is also playing a game since it earns six per cent as market fee and development cess (three per cent each),” says former All India Rice Exporters Association President (AIREA) Vijay Setia.

In addition to this, the Centre is being forced to pay the 2.5 per cent arhatiyas commission for procurement of wheat and rice for the buffer stocks the Food Corporation of India (FCI) maintains.

Though the Centre has brought in a flat commission for arhatiyas this year, it still is between 2.3 per cent and 2.4 per cent at the fixed MSP.

In terms of the outgo on the exchequer, for example, the Union government will have to pay nearly Rs 1,000 crore to the arhatiyas in Punjab for the 20.27 million tonnes of paddy procured at a total cost of Rs 38,300 crore as on 22 December from 1 October.

Agricultural experts point out at this as the focal point of the protests since the arhatiyas, who earn over Rs 1,500 crore annually from the food-grain procurement, fear that they stand to lose on this amount.

Besides, Punjab could lose revenue between Rs 3,500 crore and Rs 5,000 crore it gets by way of the mandi fees and development cess from food-grain procurement.

There are other issues, too. The reforms will end some Punjab traders’ practice of buying wheat and rice at cheaper rates from neighbouring States such as Uttar Pradesh and Bihar as those farmers can now look at the alternative trading platforms that are likely to emerge from the reforms.

The purchase of food-grain from other States is evident from the fact that this year, FCI has procured over 20.28 million tonnes of kharif paddy.

In terms of milled rice, this is over 13.5 million tonnes, much more than Punjab's highest production of rice in recent years at 13.38 million tonnes.

This is the primary reason why arhatiyas are insisting, albeit indirectly, on the repeal of the reforms.

But why should farmers, particularly in Punjab, support them?

According to experts, there are reasons why farmers are supporting the arhatiyas. This is because the arhatiyas extend them loans for everything starting from buying seeds until the crop is harvested.

The fear now among farmers is that the arhatiyas will now end providing them loans and thus, they would have to face difficulties to meet any emergency needs.

This is despite the fact that these arhatiyas charge them huge interest for the money they lend.

“Since I turn to the arhatiyas for money, I cannot take my crop elsewhere. The sole reason why he gives me a loan is that I will have to take my crop to him,” said a farmer at Asia’s largest grain market Khanna in Punjab during this writer’s visit to Punjab and Haryana during peak wheat harvest season 10 years ago.

Another farmer near Jalandhar said his family needed money for hospitalisation of a member and it could get money only from an arhatiyas. “Many times we have approached banks for loans for cultivation, but we find the process painful and cumbersome. We have to visit them quite a few times,” the farmer said.

AIREA’s Setia said that arhatiyas extend loans to farmers in cash as well as kind. “These arhatiyas hand out slips to these farmers, who can use them to buy diesel or chemicals or clothes. Everywhere, the payment is settled by the arhatiyas,” he said.

The former AIREA president also said that successive governments in Punjab have favoured the arhatiyas system. “The Congress and Akalis have raised the commission of arhatiyas from 1.5 per cent earlier to 2.5 per cent now,” he said.

According to industry officials, this has actually empowered the arhatiyas to take advantage of the situation and dictate terms.

According to Setia, political parties are also exploiting the farmers for their own benefits. “When real issues have cropped up, these parties have failed to act,” he said.

For example, in 1988, the Centre imposed a levy on basmati rice. This resulted in the fragrant rice price dropping to Rs 150 a quintal from around Rs 500.

When the issue was taken up with then Punjab agricultural official Shyma Mann, she passed an order that basmati selling above Rs 450 a quintal will be exempted from the levy.

“Immediately prices regained their previous level and things were sorted out. This helped in exporting basmati rice. Sometimes, we need such one line of action to set things right,” Setia said.

Again in the late 2000s, no farmer agitated when the government said that Pusa-1121 basmati variety was non-basmati.

“Today, Pusa-1121 accounts for over 60 per cent of Basmati exports from India,” Setia said.

Experts say that the Modi government might have to present its case of reforms in a better way.

But they add that political parties such as Congress and Akali Dal, besides the arhatiyas, have played on their fears that they are not trusting those who genuinely care for them.

Most of the experts hope that the government’s perseverance in trying to convince the farmers will likely pay off soon.