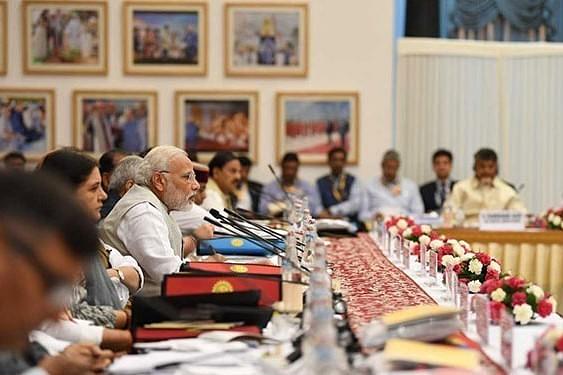 As India marked one year since the goods and services tax (GST) was implemented, the shift from logistics designed around tax efficiency to operational efficiency is gathering steam. Although it obviously isn't an infrastructure measure, GST's second order effect is to incentivise infrastructure development that lowers transportation costs. The successful implementation of GST in India has attracted significant commentary on its economic benefits and challenges, but there has been a muted discussion on the political achievement of the Bharatiya Janata Party (BJP) in building consensus to deliver the reform.

Political support for GST didn't come easily. A trust gap had been created by the previous Congress-led government. Central sales tax was eliminated in February 2007 when India embraced the value added tax (VAT) regime. The United Progressive Alliance (UPA) government agreed to compensate the states for the revenue loss, estimated at Rs 34,000 crore. As the fiscal deficit escalated under its watch from 2010 onwards, the UPA government conveniently stifled the states, and the committed compensation to them was withheld. In the 2013-2014 budget, then finance minister P Chidambaram provided for just Rs 9,000 crore to be reimbursed to the states, and of this, only Rs 1,900 crore was actually released.

It should be remembered that this high-handed denial of dues was at a time when the deputy chairman of the Planning Commission, a commissar appointed by the "ruling party" of New Delhi, controlled allocation of funds to the states, giving the Congress party enormous discretion over which states received funds. The dissolution of the politicised Planning Commission, where a party mandarin in New Delhi dictated terms to India's elected chief ministers and the increased devolution of funds from New Delhi to the states by the fourteenth Finance Commission have since transformed the relationship between the Union and the states.

It is in this “political economy” context that the Modi government's achievement in building consensus and consent for GST must be seen. With the GST reform on the anvil, the Union government was once again promising to make up the revenue loss suffered by the states but this time the states were in no mood to play along as their trust in New Delhi had been broken, given the experience at the time of VAT implementation, a decade earlier.

Speaking in the Lok Sabha in December 2014, Finance Minister Arun Jaitley made a commitment that the accumulated dues of Rs 34,000 crore to be paid to the states by the Union government would be released in three instalments, with the first payment concluded before March 2015. To its credit, not only did the Modi government control the fiscal deficit, the government bit the bullet and started releasing the Rs 34,000 crore in 2015 itself. It was this step that helped the Modi government win the support and confidence of India's states.

The principal criticism of India's GST is that it has too many rates. Pedants and ivory tower academics cite the basics of taxation doctrine in defence of their case: it is direct taxes that should be progressive in nature, and not indirect taxes, they pontificate, as if they have revealed the eleventh commandment.

This is a view that ignores the realities of India. It may be difficult to see this reality from the coffee shops of K Street and Piccadilly, but a national government does not have the luxury of closing its eyes to reality. If all Indian workers and firms were liable to pay taxes, the analysis of the pedant would be correct. The ground reality is, agricultural income is tax exempt in India, and the carte blanche exemption means that even richer farmers and large, publicly-traded corporations in allied areas such as the seed industry don't pay taxes.

When Bibek Debroy, member of the Prime Minister's Economic Advisory Council and NITI Aayog, suggested that agriculture income be brought into the tax net, there was a firestorm of criticism, especially from the Congress party and its media surrogates, who jumped at the opportunity to paint the government as anti-farmer.

Rate rationalisation for GST will have to go hand in hand with direct tax reforms. Until recently, long-term capital gains (LTCG) tax on listed equity investments was also zero. A major step was taken in this year's budget with the introduction of the 10 per cent LTCG tax for listed equities. The Modi government has also renegotiated tax treaties with Mauritius, Singapore and Cyprus to tax capital gains on foreign investment, equalising the treatment of Indian and international capital and removing any incentive for Indian residents to illegally "round-trip" their capital to India through tax havens.

The Arbind Modi-led committee on direct tax reforms was constituted in November 2017 to deliver a blueprint for comprehensive direct tax reform, and its report is awaited. Even with deep direct tax reforms, which should include eliminating dividend distribution tax and the securities transaction tax, bringing parity between taxation of listed and unlisted equity investments and lowering corporate taxes for firms of all sizes, it is likely that India will retain a multi-rate GST structure, narrowing the bands to two or three from five.

One of the most under-appreciated outcomes of the GST era is that people now know what the effective tax rate is for goods and services that they consume. This transparency enables debate on rates. What is the impact on tourism and the hotel industry if luxury hotel rooms (arbitrarily defined as having a nightly price of above Rs 7,500) are taxed at 28 per cent? What should be the tax rate on medical care and education, even if they are privately provisioned? Should air conditioners be taxed at 28 per cent as a luxury item? In the pre-GST era, such discussion was not possible as the effective rate was obfuscated by cascading taxes.