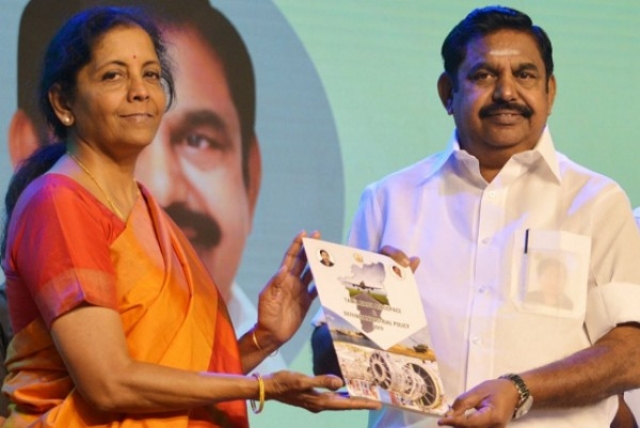 The AIADMK government has bettered its performance of the 2015 investor meet.

Commitments for investment in Tamil Nadu at the two-day Global Investors Meet (GIM) 2019 ending 24 January indicate that the All-India Anna Dravida Munnetra Kazhagam (AIADMK) government has bettered its performance of the 2015 event.

At the valedictory event of GIM 2019, Tamil Nadu Chief Minister Edappadi K Palaniswami announced that investment commitments to the tune of Rs 3.42 lakh crore have been made with 304 companies signing the memorandum of understanding (MoU) for investments in various sectors. The MoUs include a special feature of 12,360 medium, small, and micro enterprises signing to invest Rs 32,206 crore to provide jobs to nearly three lakh people.

That makes it nearly 25 per cent of the investment commitments made in 2015 realised – a good conversion rate going by what has been happening all these years. Even in 2015, when huge commitments were made, Tamil Nadu government officials would say off the record that even realising over 10 per cent would be beneficial.

One of the things that went wrong in 2015 GIM was that there was always an air of uncertainty over its conduct, given the health of the then chief minister J Jayalalithaa. The event got finalised hardly 45 days before the scheduled date, and Tamil Nadu bureaucrats had to work overtime to get things in shape as per schedule.

The biggest defaulter of the 2015 investment MoUs is the power sector, with some of them failing to materialise after tall promises were made.

This time around, the Palaniswami government first ensured that it would have adequate time to prepare. The Cabinet met at least thrice to clear the investment proposals valued at over Rs 50,000 crore by over 50 firms.

It is one of the reasons why Palaniswami, in his address during the inauguration of the event, said that GIM 2019 was well set to top the Rs 2 lakh crore investment target. The government chose to focus on industries like aerospace and defence, automobile and components, agro and food processing, and a few others like electronics and information technology (IT) besides medium and small industries.

Governments could provide assurances or make promises to attract investments, but the promised money has yet to be committed to improve the state’s economy and offer employment – key objectives of attracting investments. So, what has made the current AIADMK government exceed its own expectations?

Tamil Nadu enjoys some advantages over other states in the country, because of which companies looking to invest in the state can ignore some temporary blips like the political uncertainty seen in the first half of 2016.

According to Ford Motors India’s managing director Michael Brielmaier, one of Tamil Nadu’s biggest strength is its talent that helps the state compete internationally. The talent is diversifying and expanding into various fields, making the state more attractive.

Tamil Nadu offers investors a workforce that can be advantageous in the manufacturing sector. With about 1,000 technical education institutions, including engineering colleges, in the state, investors get great options of skilled and educated manpower.

These manufacturing firms are backed solidly by IT majors like IBM, Cognizant, Tata Consultancy Services, Infosys, Wipro, and HCL.

Though Brielmaier talked of infrastructure being a problem in Tamil Nadu, it still offers better options that other states. Tamil Nadu offers good connectivity through sea, air, and land.

This is one reason why Japanese or Taiwanese firms have given a priority to Tamil Nadu over other states. From Tamil Nadu, you can access any part of the country or world using the transport of your choice.

According to Karan Adani, the chief executive of Adani Ports and Special Economic Zone, distribution of the state in the economic sector is balanced with manufacturing sector contributing 34 per cent, service sector 35 per cent, and agriculture 21 per cent.

Tamil Nadu, being the second-largest economy in the country, making up 6 per cent of the population, has a good work ethic.

French glass major Saint Gobain India’s managing director and chief executive officer B Santhanam says the primary reason for his company turning into a serial investor in Tamil Nadu is that the state has the three Cs – competence, commitment, and credibility – his company is looking for.

These are the basic issues that Tamil Nadu is able to address, and there are a couple of other things that has made GIM 2019 a record-breaking one.

Santhanam, addressing the valedictory event, made an interesting observation on Chief Minister Palaniswami. “The progress Tamil Nadu has made in the last two years is impressive even by the standards set by his (Palaniswami’s) predecessors,” the Saint Gobain official said.

Ford’s Brielmaier says the Tamil Nadu government continues to learn from its shortcomings and makes an attempt at “understanding customers”.

One of the reasons for Tamil Nadu being a credible investment destination is that be it any government till now, Dravida Munnetra Kazhagam (DMK) or AIADMK, it has tried to fulfill the fiscal commitments made to investors.

For example, when Ford signed an MoU during 2015 GIM, it was promised some concessions for buying land to set up its research and development (R&D) centre in Chennai. With Tamil Nadu going to the election soon after in May 2016 and Jayalalithaa falling ill, the investment got stuck over a land issue.

With Ford officials following up on the issue continuously, Tamil Nadu officials helped the American firm go ahead with the R&D centre that will have the most number of the company’s employees – over 10,000 – after the Dearborn facility in the United States.

According to Santhanam, the Tamil Nadu government makes provisions in its budget for supplying fiscal support to the investors as promised, which showed its commitment.

There have been a few other tricky issues like the one with single-window clearance or land problems that have been sorted out in time.

These initiatives have helped many companies to perform well. Adani, for instance, took over the Kattupalli sea port from L&T in 2016. In a matter of three years, the port’s cargo volume has trebled.

Adani told the GIM that the port aims to become one of India’s largest by handling 300 million tonnes of cargo annually. The Adanis have also come up with one of the largest solar farms in the world at Kamuthi in Ramanathapuram district.

There were a few other things that the Palaniswami government did this time. One, it launched the process for the GIM in July 2017 after some industry representatives pointed it out to the state suffering from a negative image due to a slew of protests starting from the one to conduct jallikattu in 2016.

Second, the government brought in a couple of key personnels starting with the posting of K Gnanadesikan, additional chief secretary, to the Industries Department. Then, it made another Indian Administrative Service (IAS) official V Arun Roy the nodal officer for GIM to liaise between various departments.

The government also brought back M Velmurugan, who had headed the Tamil Nadu Guidance Bureau for over 20 years, after his retirement. Velmurugan was a key personnel for the success of GIM in 2015, and he played his role in identifying the area of investments and investors.

Another IAS official, D Sabitha, was inducted into the core team for the event’s organisation. She played a leading role and supervised the conduct of the event as the scheduled date drew closer. She had a big role in the smooth conduct of events during GIM.

These initiatives have resulted in some big-ticket investments led by Chennai Petroleum Corporation Limited, which will put Rs 27,400 crore to set up a refinery at Nagapattinam. Other investments include Rs 23,800 crore by NLC, Hyundai Rs 7,000 crore, including to manufacture electric cars, MRS Rs 3,100 crore, Foxconn Rs 2,500 crore, and PSA Peugeot of Italy Rs 1,250 crore to produce cars, besides Rs 12,000 crore by Adanis.

The investor meet also saw Japan’s All Nippon Airways announcing that it will begin operating direct flights to Tokyo from Chennai, now that over 200 Japanese companies are based out of Tamil Nadu’s capital.

On its part, the opposition DMK called GIM an eyewash, forgetting that the global meet is in fact an event that has been carried forward from its 2010-11 initiative. Then the deputy chief minister M K Stalin, who is now DMK chief, signed a slew of MoUs that promised investments of over Rs 10,000 crore.

Unfortunately, on 24 January, when GIM was on, DMK chose to take out a procession to Raj Bhavan to demand from Tamil Nadu Governor Banwarilal Purohit an investigation supervised by a retired High Court judge into the theft and a couple of murders following it at the late Jayalalithaa’s estate in Kodanad.