Is The Aadhaar-Enabled Public Distribution System Working On Ground? 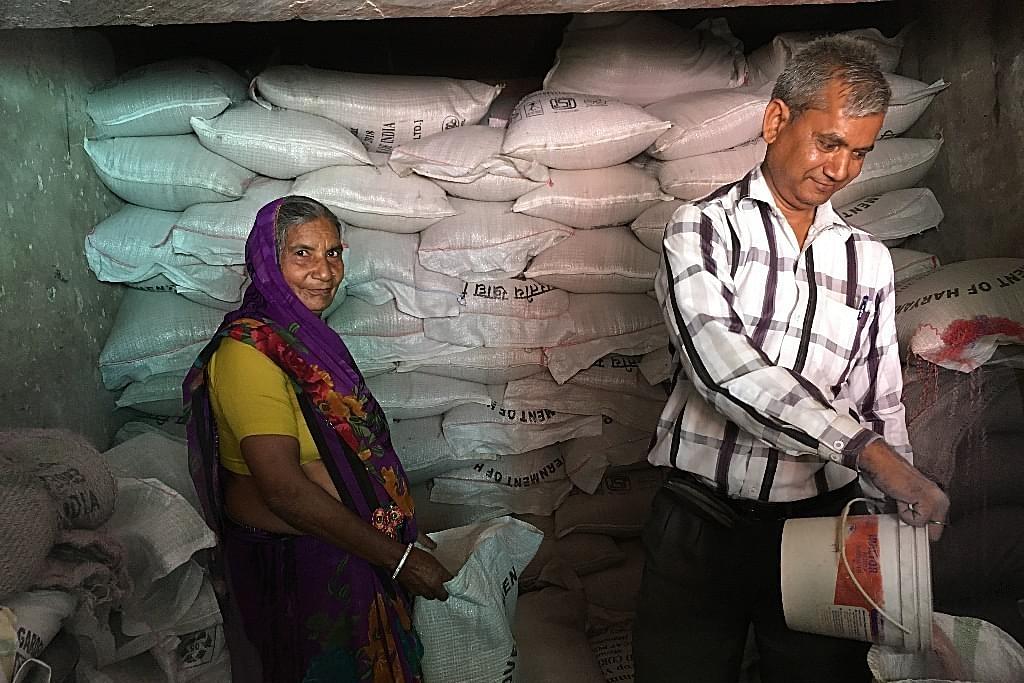 Right from its inception in 2009, the Aadhaar project has been promising to weed out fake beneficiaries of state welfare schemes and pass on the benefits to the real needy, and without leakages.

Introduction of compulsory biometric authentication of all cardholders in the public distribution system (PDS) is a component of this ambitious, large-scale project. What this means is that beneficiaries get their ration cards linked to their Aadhaar numbers (it’s called Aadhaar seeding) and to avail of their due ration, they go to the outlet, use an electronic device for biometric authentication and take home the supply.

They get a confirmation of how much ration they have been provided through a text message. No signing or thumb print impressions on registers.

At this point, it's debatable whether the linking of the PDS with Aadhaar is a necessary reform or an ill-conceived idea. The government has made several claims touting its success, but they have been questioned. For instance, the centre told Parliament that linking ration cards to Aadhaar number has helped weed out over 2.75 crore duplicate and bogus ration cards that were used to get highly-subsidised foodgrains. The government has said this has helped it save thousands of crores of rupees.

This claim, however, has been met with skepticism as it's not really known where the government sourced this data from. In an embarrassment for the government, activists have produced ration card holders in press conferences who had been declared "dead" or "ghosts" through Aadhaar.

What is not debatable, however, is that the new system is riddled with implementation issues.

To find out how the 'reform' looks like on the ground, we visited Bayana Tehsil in Bharatpur district to learn of the associated problems and challenges. Rajasthan is one of the states that adopted the system very early.

Scores of people huddled around a PDS outlet on Friday afternoon to get their monthly quota of subsidised ration. For Sheela Devi, it was her third visit in two weeks. In the last two visits, the electric Point of Sale (PoS) machine didn't work. "I kept pressing my thumb against it. The machine just wouldn't register the thumb-print," she said. "The last time, the dealer asked me to wash my hands and return. But it's a two-kilometre distance and could not afford to come again the same day," she said.

Like Sheela Devi, residents routinely make the journey to the PDS outlet only to find the fragile technology of PoS machines failing them. Mansukh Kumar, the dealer, says the claims are exaggerated. "Yes the machines don't work at times. But it's not all that bad," he says.

The remark prompts protests from the crowd.

In this rural village where residents are largely employed as field labourers, the project arrived as a hassle from the very beginning. "They had a camp here. An entire day was wasted," is how Gulab Singh, 62, recalls the Aadhaar seeding project. The camp was meant to get Aadhaar numbers linked to ration cards. Residents complain of discrepancy in details on ration cards and Aadhaar database. It may have been a result of human error but what it translates to is a situation where a person is denied access to food.

Singh is a victim of the carelessness in seeding. "When I went to the shop to get ration, I was told my details didn't match. I had to make several trips to get the details fixed. I did not get the ration for that month."

It's been six months since Bayana enforced the Aadhaar-linked system and such initial hurdles have been largely crossed. The change in system denied many a listed beneficiaries their due for at least a month, though. However, as mentioned above, the actual biometric authorisation needed at the time of each purchase remains a routine problem.

The whole process requires a number of technologies to work in tandem: A functioning PoS machine, active state and central identities data repository servers and Internet connectivity. Kanta Devi, another resident, has even grown deeply suspicious of the electronic device. "I hate the machine. Why can't they just make us sign in registers like they did earlier," she said.

The residents were promised transparency in the supply of ration but it remains a promise, they say.

Suresh Chand, a 40-year-old resident, shows text messages on his mobile phone showing the quantity of ration he received. An educated man who works as a government school teacher, he is satisfied with the system. But other residents, especially those who can't read and write, complain that the dealers continue to "play games" like they did in the past.

Kanta Devi says the dealers kept turning them away the entire month saying the kerosene has not been supplied to them yet. "Upar se hi nahi aya (they did not get it from the authorities)," Kanta Devi said, quoting the dealer. "It came on 27 (27th day of the month). But we weren't in the town then. We missed out on it," she said.

Residents say the dealers siphon off the left-over ration "just like they did earlier". They also speak of the non-existent mechanism for grievance redressal and accountability. The periodic social audits in the functioning of ration shops are also absent. Kishen Chand Verma, one of the more educated residents who retired as a government employee, said the government "has not undertaken even a single audit".

"Ye maatra aupcharikta hai (the promise of audits was just a formality)," he says. "The dealers and other authorities are having a free run. No one is accountable. Nobody ever visits," says Verma.

This largely gloomy picture of a sudden jump to a new system raises serious questions on the government’s efficiency in implementation of a scheme that was supposed to be a change for the better.

It looks like in its enthusiasm to achieve 100 per cent seeding, the government has martyred thousands of people. Though Bayana hasn’t thrown up extreme fall-outs of the poor implementation like in Jharkhand where a minor girl in Karimati village allegedly died after being denied ration over Aadhaar issues, it presented cases of families surviving on measly ration for days.

Corruption and lack of accountability at the local level continues to mar the ambitious Aadhaar-enabled ration distribution project. Is the government listening?