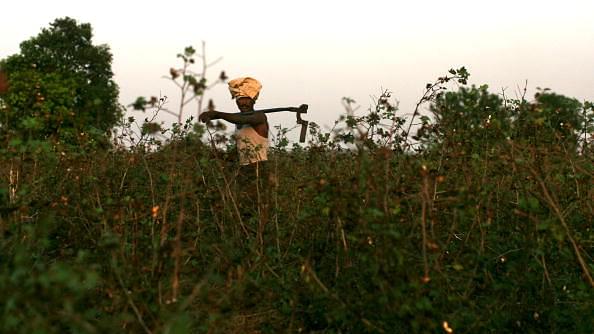 A farmer walks through a cotton field in the village of Sunna in the Vidarbha region of Maharashtra. (Uriel Sinai/Getty Images)

Uttar Pradesh Chief Minister Yogi Adityanath chaired his first cabinet meeting yesterday (4 April). Delivering on Prime Minister Narendra Modi’s promise in the run-up to the state election, Adityanath decided to waive off farmers’ loans worth Rs 36,000 crore in a move that will come as a relief to small and marginal farmers. The condition is that the borrowed amount should not exceed Rs 1 lakh.

This fiscally imprudent decision surprised many, including the supporters of the Bharatiya Janata Party (BJP), which has built a reputation for itself as being fiscally conservative. This waiver is, however, reminiscent of the disastrous waiver announced by the United Progressive Alliance (UPA) government in 2008, a year before the general election. Though the BJP government at the centre has so far stayed clear of financially irresponsible behaviour, the amount waived off by the Adityanath government is significant. The UPA waiver cost taxpayers about Rs 72,000 crore. Adjusted for inflation, the new waiver will come up to around one-third that cost.

It is wise to draw some lessons from the 2008 scheme, officially christened as Agricultural Debt Waiver and Debt Relief Scheme (ADWDRS), as the effects of Uttar Pradesh government’s waiver are bound to be similar.

Xavier Gine and Martin Kanz co-authored a paper in November 2013, two years after the 2008 waiver scheme came to an end. Titled ‘The Economic Effects of a Borrower Bailout: Evidence from an Emerging Market’, the paper analysed how the UPA government’s decision impacted the economy and behaviour of the beneficiaries.

The authors found that the waiver “generated no measurable productivity gains, but led to significant moral hazard in loan re-payment”. Of course, when you waive off loans for those who are offenders, you are effectively mocking and punishing the law-abiding person who has paid their loans promptly. Demonetisation was hailed by many as a one-time tax on the crooks. Waiver is a tax on the honest person.

What happens after a waiver is that the defaults also increase eventually. This is because there is always an expectation that the government will step in to rescue the farmers from the debt trap.

See how the loan performance declined after the 2008 waiver.

The Gine-Kanz duo shows how post-programme credit allocation was also affected due to the waiver. They observed that the effects were “larger in areas with greater exposure to the bailout”.

However, an important point the authors note is that the value of the total credit disbursed didn’t come down. This means that the “additional credit was disbursed to existing customers in good standing.” Which suggests that banks acted conservatively by not expanding the customer base.

See how the new credit amount increased but not the number of new loans.

The authors also note that the “loan performance declined faster in districts where beneficiaries of the scheme were high”. They reached this conclusion after tracking credit allocation and loan delinquencies for 491 districts of India over the period from 2001 to 2012. The duo matched this data with information on the amount of debt relief as a share of total credit allocated in each district.

The evidence is conclusive. Farm loan waivers hurt the economy and encourage bad behaviour. The results of the Uttar Pradesh loan waiver won’t be any different.

Ask yourself: the UPA loan waiver of 2008 cost the government more than Rs 70,000 crore. If this scale of waiver did not ultimately help farmers move to more sustainable sources of income, and Rahul Gandhi now thinks another farm loan waiver is needed, what is the guarantee that another round of loan waivers at the state level will cure the disease?

India needs an exit policy for unviable farmers and farming, not indefinite life support for them to remain in the comatose condition. When 67 per cent of India’s farms are below one hectare, a size that is not optimal for ensuring higher investments in raising productivity and incomes, how can endless subsidies solve this problem?

A more fundamental rethink is required by political parties and economists on the viability of farming in large parts of India. The repeated call for farm loan waivers is a sign that farmers need to get out of farming when they can. It is the government’s duty to aid this change, not retard it.