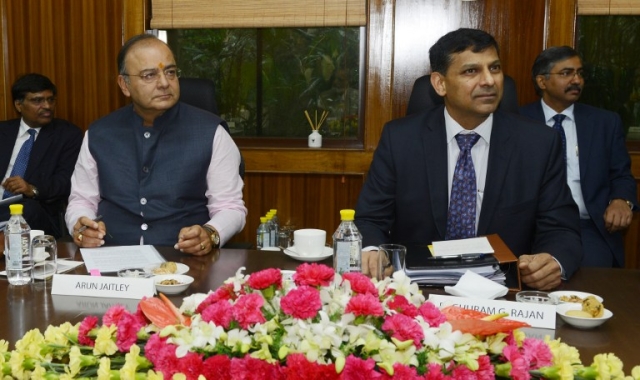 A promising monsoon forecast for the ensuing season has enthused not just market sentiments, but more importantly, the outlook of the Finance Ministry, which now seems to be reworking growth projections for the economy. To begin with, the economic affairs secretary Shaktikanta Das, observed:

If monsoon is good, we should definitely do better than 2015-16. It [that is the growth rate] should be upwards of 7.5 percent this year.

A couple of days later, finance minister Arun Jaitley was sounding even more positive when he said that the government might revise its projection of economic growth for 2016-17 to 8-8.5 percent from its earlier estimate of 7.5 percent.

Even Reserve Bank of India governor, Raghuram Rajan, in his interview to the Wall Street Journal said a good monsoon would give more room to the RBI to cut its benchmark rate. Of course, he did not specifically talk about the growth rate, but his perspective on emerging monetary policy stance would be favourable for the growth scenario.

What is the feasibility of achieving such a high growth? In the post-reforms period (1991-2015), there have been eight years when the country achieved real GDP growth rate of 8 percent and more – and with three exceptional years recording an annual average growth rate of about 9.3 percent (2005-06 to 2007-08). In five of these eight years, the high overall economic growth rate was associated with a high agricultural GDP growth rate, ranging from 4.2 percent to 9.9 percent (averaging out to 7.4 percent per annum).

Where 53 percent of the gross cropped area is still rain-fed, the monsoon surely has a powerful influence on agricultural production and agricultural GDP growth. However, apart from the quantum of rainfall, its precipitation and spatial distribution are also critical factors in generating maximum positive impact. The other two key factors normally impacting agricultural performance are: rate of investment/capital formation (public and private) and incentives through pricing mechanism (for example, minimum support prices). But these are generally unlikely to experience large variation from year to year.

If, therefore, we assume the validity of the Indian Meteorological Department’s (IMD) forecast of normal monsoon, and also expect it is reasonably even distribution across 36 meteorological sub-divisions, there is a strong possibility of agricultural GDP expanding by 6 to 7 percent in 2016-17 or even higher. Consequently, it may not be foolhardy to project overall GDP growth rate of 8 percent or more in the current financial year.

But there is no denying that several other growth promoting forces also influenced the performance of the manufacturing sector in some of those years, especially the corporate sector’s vigorous investment drive and successes in export markets. So a normal monsoon and the likely resurgence of agricultural GDP per se may not ensure high manufacturing growth in the absence of two major links, namely, revival of corporate investment and exports growth.

Given this, two possible alternative growth scenarios for 2016-17 are possible:

First, the normal monsoon would, at best, lead to agricultural GDP growth rate of, say, not more than 4 percent (as was the case in 2006-07) and its beneficial fall-out on other sectors, namely, manufacturing and services sector would, therefore, be limited. It may relieve rural distress and current acute water scarcity, but its growth pull may not transmit substantially to the overall growth performance. This means the growth outlook for 2016-17 would be marginally better than the previous year’s 7.3 percent real GDP growth.

The second scenario is the one which Jaitley is envisaging (8-8.5 percent growth). This is certainly based on the assumption of a stronger agricultural bounce back. It is further predicated on fuller backward and forward linkages and most of these happening during the course of the current financial year itself.

In this framework, agricultural resurgence would trigger a powerful impact on manufacturing through the demand side – demand for tractors and fertilizers in farming operations and for consumer goods like clothing, bicycles and two-wheelers through increased purchasing power. From the supply side, the positive impact would manifest itself in anchoring retail inflation within the RBI’s comfort zone (less than 5 percent on year-on-year basis). Equally importantly, this would also improve considerably the availability of agricultural raw materials for a host of processing and manufacturing activities, be it cotton textiles or food processing.

However, the rationale of high growth obviously depends on how the actual monsoon scenario evolves. This can only be firmed up, say, by the close of August 2016. In the meantime, the finance minister may be wanting to use the opportunity for “sentiment engineering” (perhaps prudently) by talking up the growth.

But growth triggers are a complex phenomenon; it is not enough for just one of the parameters be right, but there has to be convergence of many. For example, the entire premise of stronger growth is predicated on domestic demand. This is so because India has suffered the worst foreign trade performance during 2015-16, and there does not seem to be any early signs of a turnaround in this situation. The setback during Great Recession of 2009-10 was considerably milder in comparison. Thus, exports have shrunk by as much as 15.9 percent from US$310 billion in 2014-15 to US$ 261 billion in 2015-16. At the same time, imports also dropped from US$448 billion to US$379.6 billion.

What also transpires is that after a decade of remarkable growth (2001-2011), external trade is in the midst of a prolonged phase of stagnation, lasting for four years till date. The collapse of international crude oil and petroleum product prices is obviously the villain of the piece, causing massive shrinkage of both imports and exports. But there are other factors, including the perceived overvaluation of the rupee, based on real effective exchange rate, undermining exports competitiveness.

Hence, there are serious concerns that strengthening of rupee will lead to a loss of India’s exports competitiveness, and that, in turn, will hurt the recovery of the manufacturing sector. Also, imports are becoming cheaper, at a time when many of India’s basic industries are reeling under excess capacity, and so an appreciating rupee may not augur well.

Finally, to leverage the likely favourable impact of normal monsoon on the overall economic growth, the government has to put the reforms agenda, including various flagship programmes like Make in India, Start-up India and their implementation high up in its priority list.