Missing Fiscal Reforms: Why The New Karnataka Budget Is A Non-Starter 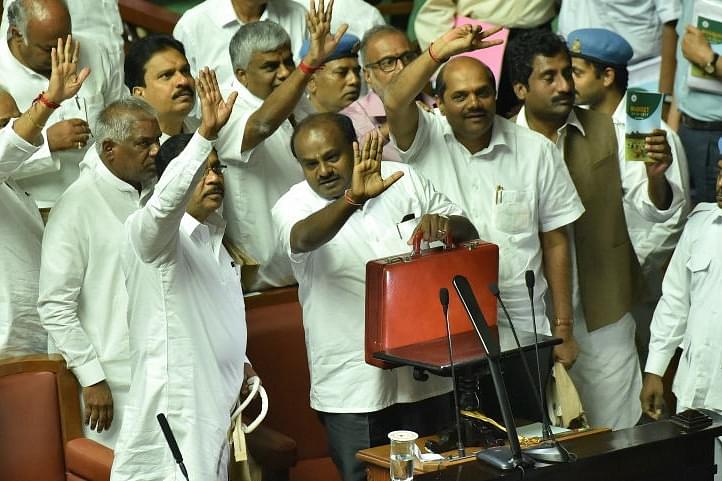 The Karnataka government presented its budget last week that neither has fiscal reforms or any major changes in the state’s development paradigm.

The Janata Dal (Secular) and Congress coalition government has made its budget estimates on the assumption of a nominal economic growth of just 7.5 per cent. In real terms, the actual growth would be a little less than Professor K N Raj’s famed Hindu rate of growth definition.

The growth number is revealing. This is because, the national budget is estimated to grow at 12 per cent this year, according to the budget estimates in nominal terms, or over 7.5 per cent in real terms or the fastest in the world. The underlying acceptance in the budget is that Karnataka is faced with a massive slowdown in economic activity.

Obviously, high growth years are history. Unlike in the past, the key engines of economic activity in the state, the real estate and the information technology sector, are faced with severe headwinds.

The impact on the IT sector, however, is really from the cross-border events. The entire IT sector has benefited from Uncle Sam magnanimity and to some extent the US Federal Reserve's monetary expansion post 2008. But Uncle Sam’s benevolence has evaporated since 2017 and Indian IT industry is at the receiving end.

The sector has not yet collapsed, though a severe compression in IT earnings is evident. That compression essentially limits the ability of the government to leverage consumption in Bengaluru for revenues. The city has been the mainstay of the state’s revenue kitty for close to two decades. Besides, goods and services tax (GST) has also taken away the state’s flexibility to raise resources through rate tweaks on consumption goods.

Karnataka, therefore, had only a few options to raise revenues. Those options were electricity and petroleum products that still continue to be taxed on the old ad valorem rate, excise and motor vehicles tax.

Given the political base of the present minority government is entirely the Mysore-Mandya-Hassan belt, the administration had to fulfill its major electoral promise. That promise was to offer major concessions to farmers, hit hard by the series of droughts and other natural calamities.

However, the farmers benefiting from the loan waivers are hardly small or marginal ones. The benefits are heavily skewed in favour of large holdings. This is because small farmers have little access to credit from the organised financial sector. Therefore, the loan waiver scheme is heavily slanted to favour political constituencies rather than the farming community at large.

Despite the inherent discrepancies and contradictions, the state government needed to fund the loan waivers to settle the debt to the banking sector. So raising funds for meeting this humongous payout of Rs 34,000 crore, equivalent to the Karnataka’s share in central taxes, was a challenge.

The state has other expenditure, revenue expenditure that includes salaries for government officials, police personnel and maintenance expenditure for state highways and irrigation canals with only its limited resources for meeting the revenue expenditure. Moreover, slowing economic activity would mean reduced revenue inflows into the state coffers.

Clearly, the present internal revenue flow would not be enough for meeting even the working fund requirements of the government. Besides, there is little hope for any change or hike in GST rates without ratification by the GST Council. The council is where all the state government finance ministers meet and confer. The option, therefore, was to exercise revenue raising options through the available sectors.

This is precisely what the state government has done. Although the JD(S) and the Congress have been critical of the Centre’s handling of the surge in international petroleum prices, the state government chose to tap exactly that sector for raising resources. Petroleum sector contributes to over 50 per cent of the state's tax revenues directly and indirectly.

Petroleum rates were increased by 2 per cent. Petroleum tax in Karnataka would now be 32 per cent. Similarly, in the case of electricity, the tax rates were raised to 9 per cent.

The taxes on energy translate into costs and are bound to have a cascading effect on farmers’ costs. The hike in fuel, especially diesel costs would mean that farmers would end up with higher working capital costs, for operating machinery, especially harvesters, tractors and pump sets. Ditto in the case of electricity, that are used for pumping water. It means the effect of the hike in central minimum support prices would stand neutralised.

Besides, as normal urban folk farmers also utilise electricity in their homes and for their daily needs. So, hikes in the energy costs would mean that the farmers’ overall cost of living has not been alleviated by the loan waivers. Instead it has actually increased.

The electricity levies also affect railways. The railways are the largest consumer of electricity in the state. With open access in place, the railways have the option to enter into bulk purchase contracts with the lowest cost supplier, implying that Karnataka could lose in the process.

What it means is that economic activity, that should have been stimulated, is actually stifled by the state government’s regressive taxation efforts.

Where the government got its tax algorithms right was in motor vehicle taxation. Using the floor square metre area for tax imposition is actually brilliant. Past proposals were based on engine capacity. The change would eliminate the possibility of bypassing engine limits in taxation. Obviously, the state government learnt from the Delhi government proposals that had used engine limits. When the Aam Aadmi Party government imposed an engine limit of 2000 cc, ceiling, vehicle-makers got around the ceiling by shrinking engine size to 1999 cc. The floor area concept could somewhat help contain the vehicle density in the state.

The hikes though could have been better targeted with a bias for public transport entities. This is because changes in road taxes and fuel costs are all pass through and would inevitably be passed on to consumers. Incidentally, people in rural Karnataka are the largest users of public transport.

What is really surprising is that non-economic activity especially alcoholic beverages, the tax rates hikes have at best been marginal. The increased revenue from the alcoholic beverages sector is estimated at just Rs 1,000 crore. So is this an encouragement for tipplers?

Despite the reduced economic activity projected, the government has still estimated gross internal tax revenues ( tax receipts net of central transfers) increase of 16 per cent on the basis of the steep rate hikes on energy.

In making these projections, the government has grossly underestimated the possibility of fiscal slippage. The fiscal deficit is estimated at just 2.89 per cent of the gross state domestic product (GSDP).

What it portends is that the state government has a difficult choice staring before it. Revenue constraints will most likely contain political rhetoric. That would mean that several measures announced in the budget are unlikely to materialise. The alternative of course is to use the borrowing route to sustain expenditure, especially revenue expenditure. That would not be a wise choice.

The budget has a political message. A government with a mandate takes a five-year perspective. This budget has taken a short-term view, and a very short one at that.