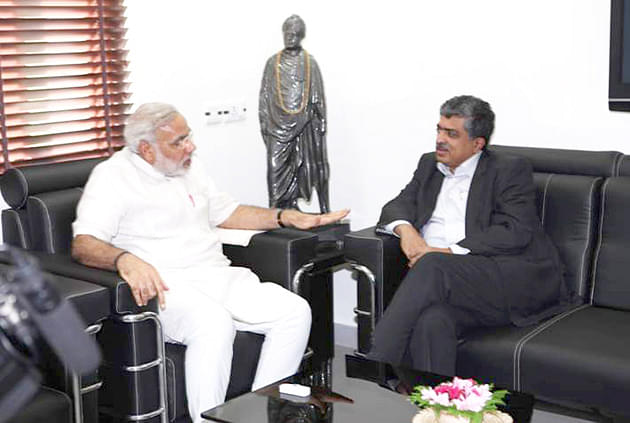 Eight years ago, the country witnessed the launch of a programme that would transform a country, where diversity defines every aspect of life, into one where every citizen across all barriers of region, religion, language and the like would be known by a unique identification number. Aadhaar, despite all the opposition it faced and the debates it was subjected to, is today the world’s largest biometric database.

Even as the Aadhaar and its offshoots are still being debated, the latest being the apex court’s decision in the Aadhaar privacy case, author Shankkar Aiyar in his book Aadhaar: A Biometric History Of India’s 12-Digit Revolution, traces the journey of this unique project right from its inception to the fear and apprehensions associated with it and ways to handle the shortcomings and possible issues in the future.

Here is an excerpt that looks at how a thirty-minute meeting between Nandan Nilekani and Prime Minister Modi resurrected the Aadhaar.

From 1 June, Prime Minister Modi had set a scorching pace in government. His approach to administration was focussed on knowing who could deliver and inducting know-how. He was methodical in his assessment of the landscape, moves were made only after aligning priorities and pace to fit his own calculus. As was his wont, he called for a review of all the programmes and plans under each ministry. The [Department of Electronics and Information Technology] DEIT was called on 23 June. [Ram Sevak]Sharma had put together a compact presentation on what could be done. Since Sharma knew of Modi’s interest in technology induction, he had included points on what could be done with the capacity and capability available for promoting e-governance.

Modi is constantly looking for technology solutions, not just for processes but also to engender a change in work culture. As PM, one of his first missives to his ministers was to declutter offices because they gave government a bad name and reflected poorly on India. He also wanted to enforce punctuality at work and end delinquency among government officials, who tended to turn up in office late. This was not as easy as decluttering offices; it required enforcement.

As chief secretary in the government of Jharkhand, Sharma had set up a system whereby government officials needed to clock in using an Aadhaar-enabled biometric attendance system. He then put up the collated data on the Jharkhand government website. A dashboard displayed real-time information on the number of registered users, number of active users, number of persons in office, average time at which most officials clocked in and the average time at which they left. This information was further disaggregated to reflect the Secretariat, for government institutions like hospitals, cooperative banks, schools and district offices.

Senior officers in the Prime Minister’s Office had told Modi about the Jharkhand dashboards when he had first spoken about the need to enforce punctuality in government offices. Thereafter, he had been shown printouts and a demonstration. So, before Sharma could even start on his department presentation in June, Modi asked about Jharkhand’s Aadhaar-enabled attendance system. Sharma spelt out the technology and the processes. Modi asked a few questions on how it could be bettered. Then he asked Sharma, ‘Can you implement this system for all Central government offices?’ Sharma said, ‘Yes.’ ‘How long will it take to install,’ asked the PM. Sharma replied, ‘By end September.’

Prime Minister Narendra Modi instructed his secretary and Sharma, ‘This must be done.’

Sharma’s presentation included the subject of e-governance, the entire architecture of [Unique Identification Authority of India] UIDAI, the promise of Aadhaar and its potential to save billions of rupees for the government. He mentioned that ‘even if government could reduce leakage and theft by 10 per cent it would be a big sum’.

When Sharma left the PMO, he saw a ray of hope. The PM’s acceptance of the Aadhaar-enabled attendance system could yet save the entire project.

Around the end of June, Nilekani and his wife Rohini, who runs a social foundation, were vacating their Delhi residence on Safdarjang Lane, packing up to return to their Bengaluru base. They invited Sharma for lunch.

Over lunch Sharma told Nilekani about his presentation to the PM and the response to it. Nilekani was happy to hear this and thanked Sharma for the effort. Then Sharma said, ‘Why don’t you go and meet the Prime Minister? Aadhaar is your idea; it has so much potential, why don’t you make this last attempt for it?’ Rohini agreed. Like Sharma, she thought it couldn’t possibly do any harm.

Nilekani found himself on the horns of a dilemma. On the one hand, he had lost the election on a Congress ticket and there was the history of campaign rhetoric, all the stuff that had been said. On the other, ‘the thought that Aadhaar could be irretrievably shut down was heart-breaking’.

Nilekani had spoken with friends in government. He then met with Arun Jaitley, now finance minister. Jaitley advised him to meet the prime minister. Unlike in the UPA, and in other governments, back channels were not advisable. Back-channels are those intermediaries who carry a viewpoint to the top. Modi was known to have an aversion for back-channels; both RSS and BJP party bigwigs knew this. Modi owned and Modi ran the Modi Sarkar.

On 28 June, Nilekani telephoned the PMO and sought time on 1 July. He said that he would be in Delhi only for a day and would it be possible for him to meet the PM in the first part of that day. He was given an appointment for noon, 1 July, at South Block, the office of the prime minister.

It was a one-on-one meeting. In those thirty minutes, Nilekani outlined the potential of Aadhaar. ‘I explained the platform, its expansion across many states, the applications that had been developed, the possibilities recommended by task forces and committees.’ The PM had a clear understanding of the technology and had questions about migrants and the status of cases in the courts. Nilekani allayed the fears around data security and verification. He pointed to the low cost at which the platform had been developed. He underlined the fact that Aadhaar as a platform ‘could help resolve many issues, including the targeting of subsidies and curbing corruption. It could lead to huge savings to the exchequer.’ He also emphasised the need for an early passage of the UIDAI Bill in Parliament.

Excerpted from Aadhaar: A Biometric History of India’s 12-Digit Revolution by Shankkar Aiyar, Westland, July 2017 with the permission of the publisher.