No Jobs Nirvana: India May Have Missed The Manufacturing Bus Altogether 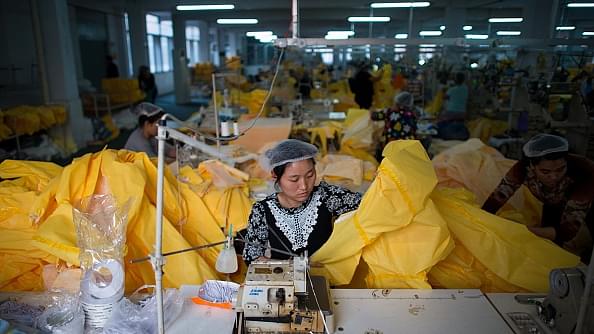 from a manufacturing factory in China (JOHANNES EISELE/AFP/Getty Images))

With hindsight, and only with hindsight, it can be said that India may have missed the bus altogether on manufacturing and export-led growth. China was probably the last major economy to gain from making itself a manufacturing and export powerhouse, but now the world is simply incapable of digesting another export-led economy like China, even assuming this can be done. India, even if it were capable of China-like policy moves, cannot probably make it.

This is because manufacturing’s golden age is gone. It is going through the same process of huge increases in productivity that agriculture witnessed in the 20th century. When productivity increases faster than demand for long periods of time, an industry has to shrink in terms of job growth.

Eduardo Porter, writing in The New York Times points out that it needed 45,000 workers to pluck 2.2 million tons of tomatoes in California some 50 years ago. Then a new oblong tomato was developed after much research, which could be picked faster with the help of harvesting machines. The unions protested to stop job-destroying research, but even after the state stopped funding research in this area, jobs still fell to around 5,000.

That’s what productivity did to jobs in agriculture. Today, farming accounts for less than 2 percent of total US employment.

Employment can shrink also due to other factors. In India, the artificial jacking up for rural wages through the introduction of MNREGA increased the pace of farm mechanisation, making more farm jobs redundant. MNREGA is a self-fulfilling prophecy.

Now global manufacturing is headed for shrinkage. According to Bruce Greenwald, the Robert Heilbrunn Professor of Finance and Asset Management at the Columbia Business School, manufacturing’s glory days are over, and its demise will lead to a slowdown, if not a shrinking, of economies that depend on manufacturing exports – with China, currently factory to the world, being the biggest potential loser (Read Greenwald’s ideas as summarised by Robert Huebscher here).

In other words, manufacturing in a productivity-enhancing scenario, will become a zero-sum game, where any gain by one country is going to be at the expense of another, whether this gain happens through higher productivity or currency manipulation or by building a moat around your economy, as both Hillary Clinton and Donald Trump are promising in order to protect American jobs.

It also (partially) explains why India has seen a sustained fall in exports for nearly 16 months consecutively. The global slowdown is, no doubt, a causative factor, but clearly exports can grow only if the currency depreciates faster than those of our major competitors, or we up productivity by a huge margin. Neither of this can happen without serious reforms. This means land and labour laws must be changed to make factory productivity grow faster than before, and faster than the rest of the world, but this ain’t happening at all.

But what is a growing trend in manufacturing, is slowly showing up in services too.

We can see that happening in sector after sector in India too. In manufacturing, automotive companies – big generators of jobs in the past - now use more and more robots even in India. Maruti uses 1,000 robots, Hyundai 400, Ford 437 and Tata Motors 100, according to this Economic Times report from last year. This year the numbers must be higher.

Banks use ATMs and internet technology more than branches, and more jobs must have gone out of the window. Washing machines, vacuum cleaners and dish-washers will ultimately reduce demand for domestic labour. If Google’s driverless cars finally succeed in getting regulatory clearances, even chauffeurs will be redundant. Automation is destroying jobs in services as much as manufacturing.

In the one industry where India has been a world-beater – software services, which employ 3.5 million people – automation is slowing down job growth. Vishal Sikka, CEO of Infosys, has said that he plans to reduce bench strength and invest more in automation.

We need not accept the Luddite position that all automation will destroy jobs; productivity growth also creates jobs, but they destroy lower-skill jobs and increase them at the higher end, making it impossible for the modern economy to shift skillsets from one area to another as fast. In effect, jobs are being destroyed.

This is particularly problematic for a country like India, which is seeing manufacturing jobs disappear at such low levels of per capita income. The job of removing poverty by creating productive jobs has gotten tougher.

This means even if Prime Minister Narendra Modi’s Make in India succeeds, it will not bring with it a huge expansion in employment – except maybe in services downstream.

People have to figure out their own jobs. Maybe Stand Up India and Mudra Bank will help people self-create jobs. Organised manufacturing offers no nirvana, from the way it is playing out all over the world.

It also explains why people think job reservations in government are the only answer. The private sector is simply not doing it anymore.