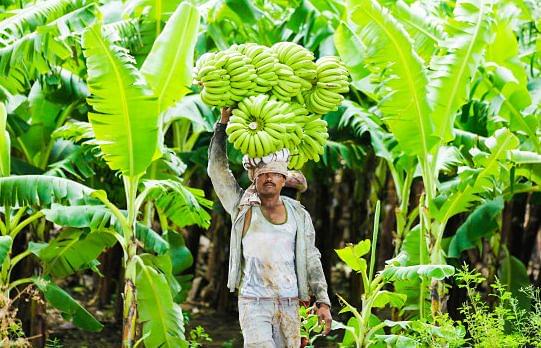 The nation-wide lockdown to tackle the spread of coronavirus (Covid-19) has affected horticulture farmers, in general, and banana growers, in particular.

“Horticulture crops such as bananas and tomatoes besides floriculture have been badly hit in view of the lockdown. Transporting the harvested crops is a problem while getting labour for harvest is another,” said R Kottaichamy, a farmer from Kutchanoor village in Tamil Nadu’s Theni district.

Bananas such as Poovan Kadali, a leading commercial variety cultivated across the country and also known as Mysore AAB, are quoted nearly Rs 60/kg at retail outlets in Chennai but farmers are getting paltry remuneration for them.

“Bananas, any variety, are offered only Rs 5-10/kg. In the normal course, the Kadali will fetch Rs 30 a kg,” said Kottaichamy.

“Bananas which earlier fetched Rs 32/kg are quoted Rs 7/kg now. Even at this price, there are few takers,” said M Subramanian, a farmer from Valliyur village in Tamil Nadu’s Tirunelveli district.

“We spend Rs 2 lakh per acre to grow bananas. Only if we spend Rs 200 per banana plant, we get Rs 400 for a banana bunch of 15 kg,” says T K Chandrasekharan, Trichy Banana Growers Association vice-president.

Tamil Nadu is the fourth-largest banana producer in the country with the output during 2017-18 (July-June) being estimated at 3.20 million tonnes.

“Red bananas and Nendran varieties command a premium. They too are quoted lower at around Rs 10,” said Kottaichamy.

The lockdown has resulted in non-availability of labour to cut bananas and transport them to markets.

“No one is available to cut bananas. These were done by migrant workers from Bihar, Uttar Pradesh and other people from the north but they have all returned home,” says Kottaichamy.

Available workers are not able to get to the farms due to curbs imposed by police.

“We will be able to take the consignment to the market in a vehicle but police are not allowing vehicles to come to our farms,” said the Theni farmer.

The beating up of a transport vehicle driver in Theni has complicated the issue for farmers as no one is willing to drive the vehicles taking such risks. Detention of workers when they travel as a group of three to four people is another hurdle.

“As there are few buyers, our bananas have ripened and are rotting in front of our eyes. Birds and crows are having a feast,” said Chandrasekharan.

A big problem for the farmers is that bananas are one of the fastest perishable crops and it can’t be stored for long.

“Nor we can simply exist eating bananas,” says Chandrasekharan, adding that in many cases a big family survives depending on banana cultivation.

Kottaichamy says that cutting bananas requires special hands since they not only cut but also carry to vehicles, arrange them and even come up with measures to protect them while transporting.

Subramanian of Valliyur said that a change in the system for buying bananas has also affected the growers.

“Earlier, brokers bought a bunch of bananas at Rs 300. We usually sold through brokers despite lower payment because of their reliability. But the trend has now changed with brokers paying us per kg,” he said.

Usually, brokers pay Rs 10/kg lower than the prevailing rates. “So, we stand to lose at Rs 150 per bunch. If we get to sell to a direct buyer, then we can cut our losses to some extent,” Subramanian said.

The other problem for growers in the Theni and Tirunelveli region is that almost their entire produce of Kadali goes to Kerala as local purchases are low. “All our Kadali bananas are exported,” Subramaniam said.

The coronavirus outbreak has brought exports to a halt. “No country is allowing export or import of any commodity. So, the export market has been ruled out of our equation now,” said Kottaichamy.

On the other hand, lower cash availability with the people has resulted in low priority for commodities such as bananas. “Since the liquidity is low, people’s priority is to buy rice, vegetables and milk. There are few takers for bananas,” Kottaichamy said.

Subramanian said banana varieties such as Kadali are either exported or used in functions such as marriages. “As both have now been ruled out, there are practically no takers for the variety,” he lamented.

Growers face a tough task to get workers to even cut the rotten bananas. “When we seek out labour, the person in charge often says he doesn’t have workers. But if we are ready to pay something extra, he gets the required people,” says Subramanian.

Be it for work in the banana farm or cutting bananas, the wage for a male worker is Rs 400 for three hours. Women are paid Rs 250 for four hours.

“Earlier, women used to help in banana cutting operations. They are no longer available for such jobs now. Some farmers to ensure labour continuity now bring families from the north that can provide at least two farm hands,” says Subramanian.

Kottaichamy said farm operations have to continue and they are being done with limited hands. “I get calls from four or five villages seeking work in my farm for planting or other activities. But I can’t employ all of them,” he said.

Farm operations are done in a limited manner and growers are wary how long the lockdown could last. “Some of the crops are of 45-50 days duration. Those growing these crops are not sure when the situation will clear,” Kottaichamy said.

Ten years ago, banana farmers faced a similar situation when heavy winds uprooted their plants. “Then, the Dravida Munnetra Kazhagam government gave compensation of Re 1 per plant,” said Chandrasekharan.

“No doubt, the Centre has done a commendable job stepping in to stop the spread of coronavirus. The state government can help us either by directly buying our produce or giving us some financial assistance,” Chandrasekharan, an MPhil graduate, who had once been adjudged best banana grower, said.

Kottaichamy says the situation of floriculture growers is even worse. “With no one to pick the flowers, their crop is almost gone,” he said, adding that tomatoes were being offered Rs 5/kg and lower.

Chandrasekharan said the growers were seeing some relief in the last couple of days with some movement towards the north to regions such as Hosur, Dharmapuri and Krishnagiri.

“Still prices offered are very low,” he said, hoping that easing of restrictions from 20 April will brighten up things for them.