No, The Tamil Farmer Is Not Paying For The UP Farmer’s Loan Waiver. Here’s Why. 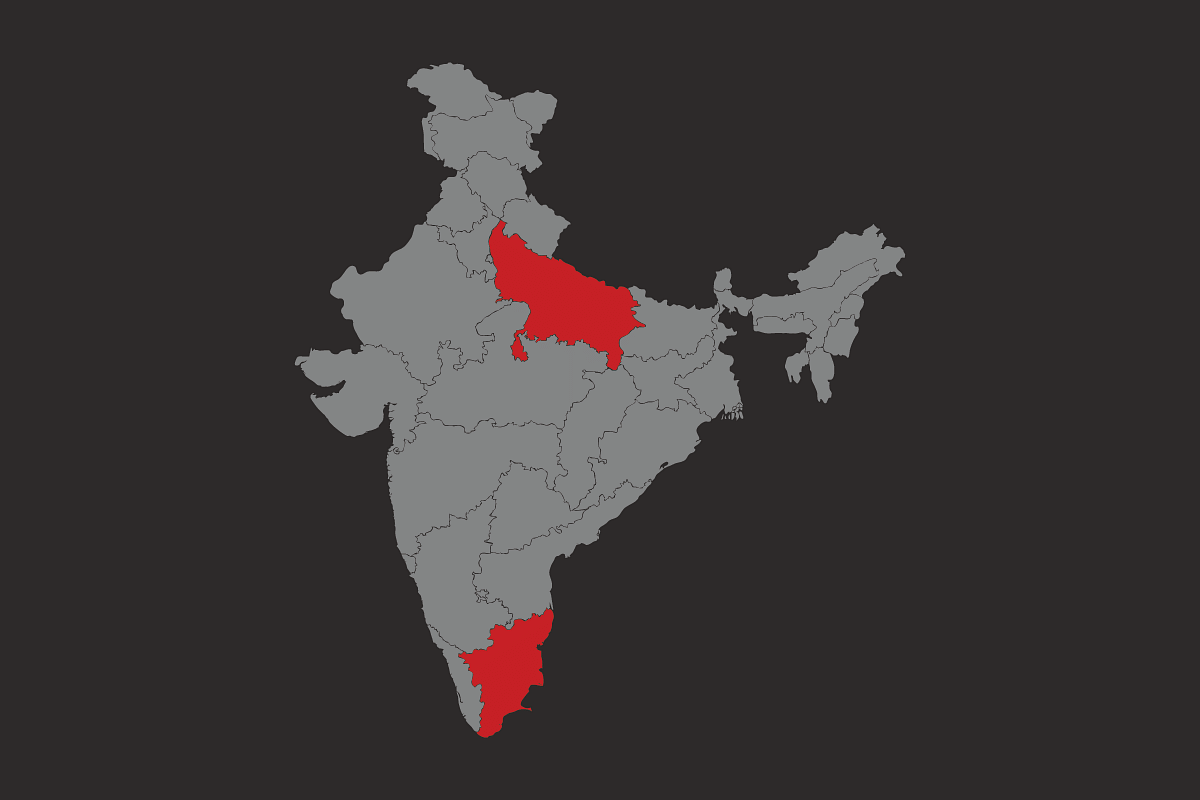 The Indian experience of a few states shouldering the bulk of the fiscal burden is hardly uncommon.

The new head of the data analytics division of the Congress party, Praveen Chakravarty, has a provocatively titled article in Bloomberg Quint, ‘The Protesting Tamil Farmer Pays For The UP Farmer’s Loan Waiver’. While the article is from May 2017, it attracted headlines and debate only recently after Chakravarty’s appointment in the party. Despite the author’s claim of letting the data speak, the data in his article does not justify the title.

First, the Indian experience of a few states shouldering the bulk of the fiscal burden is hardly uncommon. The United States (US), Germany, the United Kingdom (UK), and Switzerland have similar lopsided sharing of fiscal burden.

Second, using the state as a unit of analysis obfuscates the fact that a city (or a few cities) within those states pay a bulk of the taxes. Mumbai, Chennai, and Bengaluru are paying the bulk of the taxes, not the farmer from Tamil Nadu. Last time I checked, farm income was still untaxed. Thus, while the state of Tamil Nadu is a net payer to the central exchequer, the Tamil farmer is hardly subsidising the Uttar Pradesh farmer.

Third, the disproportionate tax burden on a few states stems from India’s unbalanced development, which in turn reflects causes that have deep roots in history as well as mirrors the global trend towards increasing agglomeration. Without persistent, large fiscal transfers from the richer states to the poorer ones, the gap will only widen and eventually undermine the foundations of a united India.

Before I delve into the comparison, the article states that, “In essence, four large states – Maharashtra, Gujarat, Tamil Nadu and Karnataka - contribute all of the economic costs of building this nation,” whereas a chart in the article shows that at least nine states get back less from the central government than they pay in taxes. So, his claim is a hyperbole, which is fine, but do realise that in getting to the number four, Chakravarty is excluding states like Kerala and Haryana, which get back only 50 paise for every rupee in taxes. Also note that the author has left out Delhi, which alone contributes 13 per cent of the nation’s direct taxes.

So, how lopsided is it that only nine states are shouldering the burden of central government spending? Based on Wallethub’s data, the Atlantic made the following chart, which shows that 14 states in the US get back less than they pay in taxes (in the chart, if a state is below $1, it means that it is getting less than $1 in return for every dollar it pays in taxes). Since the US has 50 states, 14 states out of a total of 50 works out to be 28 per cent. Apply that 28 per cent to India’s 29 states and you get approximately 8! So, nine states shouldering the entire burden is more or less in line with the numbers in the US.

Next, consider Germany. Only three states of the 16 are net contributors (meaning they pay more in taxes than they get back from the central government). That ratio is even more skewed than in India.

In the UK, three regions out of 12, i.e., 25 per cent, are net payers, with London providing the bulk of the resources. In short, India’s experience is hardly outrageous.

According to the data journalism website IndiaSpend, Maharashtra accounts for 40 per cent of all direct tax collections of the nation, of which Mumbai alone accounts for a whopping 30 per cent. This, despite the fact that Maharashtra, unlike many other states, has another major city, Pune.

This pattern is also probably true of Karnataka, Tamil Nadu, and Telangana, where the four major metros constitute the bulk of activity and taxes. In Tamil Nadu, it is the information technology (IT) professional and the auto worker who is paying into the national exchequer, not the farmer. So, should the Chennai resident now complain that they are subsidising the farmer in South Arcot (I have nothing against South Arcot.)? Why is the state a natural unit of aggregation and not the city/municipality?

The gap between India’s rich and poor states has widened in the post-liberalisation era, according to research by Chakravarty and Vivek Dehejia. I quote from their article,

A striking finding of our research is that 1990 is the seminal year that marked a structural break in the gap between the rich and poor States. In the 30-year period between 1960 and 1990, the economic disparity among India’s twelve largest States remained more or less constant. In 1990, the top three States were twice as rich as the bottom three, nearly the same ratio as in 1960. However, in the subsequent 25-year period from 1990 to 2015, the disparity between the richest and the poorest State doubled. Pre-1990 and post-1990 look like almost two different eras in India’s history of economic diversity among States.

The causes of this divergence are not well understood as the authors themselves state. I would suggest that it is a complex interplay of historical contingencies, the nature of growth after liberalisation, and the rise of the IT sector. To be sure, the more developed states have had relatively better policies, but such “better” policy making cannot be divorced from historical factors.

Economic historians have, in recent years, come around to the view that the roots of development go back deep in history. Most people don’t have the foggiest idea, but many of India’s richest houses today can trace their wealth back to the opium trade in the nineteenth century. In fact, Mumbai’s relative prosperity and rise during that century owes considerably to the opium trade. Sassoon docks and several other landmarks were funded by profits from it, while the trade itself flourished on the blood of Bihari labourers.

Abhijit Banerji of the Massachusetts Institute of Technology and Lakshmi Iyer have shown that the legacy of colonial land tenure system has led to sustained difference in economic outcomes today. They write,

Unsurprisingly, the top states today, namely Maharashtra, Haryana, Karnataka, Tamil Nadu, and Gujarat, had low levels of landlord ownership. Many of the states at the bottom, such as Bihar, Madhya Pradesh, Rajasthan, and West Bengal, had almost 100 per cent landlord holding. Uttar Pradesh did not have the extreme landholding pattern seen in its other cow-belt brethren, but at 42 per cent share of landlord holding, it was considerably worse than the richer states.

There are other historical contingencies as well. Keep in mind that the Gangetic Plains have been under the sway of invaders for the longest period and were exploited the most. Many rulers of Delhi in theory had controlled vast areas of India. In practice, their control was largely limited to the Plains. Thus, these areas were subject to the most extortionate taxes.

The British Raj exacerbated the oppression of the Plains. After the 1857 rebellion, which was largely a Plains phenomenon (the Marathas did take part), the British decided to systematically reward “loyal” groups such as Sikhs and Gurkhas, and sideline the disloyal rebelling demographics. The composition of the British Indian army changed radically after 1857.

In a series of deeply researched articles, Saswati Sarkar, Dikgaj, Shanmukh, Kirtivardhan Dave, and Aparna have shown how collaborators with foreign rulers thrived, whereas those who stood up in the rebellion are the communities and regions which remain poor today.

The post-independent Indian state has not exactly been kind to the Gangetic Plains. How many institutes of national importance were set up in Bihar? Meanwhile, freight equalisation blunted the one major advantage of mineral-rich states like Bihar, West Bengal, and Odisha.

It is hard to say whether India ever had any development strategy. At any rate, a strategy based on high-end services (IT), little focus on manufacturing, combined with poor infrastructure and connectivity to the hinterland has meant that growth has been focused in clusters and mostly along the coasts – although Haryana is an exception.

Information technology and the broader knowledge-processing services sector, which have been a key factor in propelling India’s growth over the past 25 years, are heavily dependent on relatively higher educated workers. In that, the states which had a better educated populace had a clear advantage. As I have already argued, the better education outcomes are not merely the result of smarter policies but historical contingencies.

While a labour-intensive, light-manufacturing strategy might have helped the poorer states, as it happens, poor connectivity to the hinterland has meant that manufacturing hubs have come near coasts and ports in order to reduce export costs.

It is important to remember that globally there has been an increase in agglomeration – that is, firms and people set up near one another in cities and industrial clusters. Most famous among these is the Silicon Valley, but you can see it in Guangzhou and Bengaluru, in the auto sector in Chennai and so on. In India, this tendency has become accentuated because of the combination of poor infrastructure and peculiar policy orientation.

Sowing the seeds of disunion

For an IT professional in Chennai paying taxes, should it make any difference if their tax rupees are going towards subsidising a farmer in Tamil Nadu or Uttar Pradesh? If we take that logic further, why should I care about Salem more than Chennai? Why is the state a natural unit of affection? The implicit assumption is that they should care more about their regional or linguistic identity than the national one. Thus, in guise of “fairness” to states, the argument stokes fissiparous tendencies which have been dormant for a while. It is a leaf from the old left playbook.

I leave it to the reader to judge whether the title is inflammatory and calculated to sow division. I will note, however, that such a motive would be entirely consistent with the Congress strategy of assiduously inflaming sectional and sectarian passions.