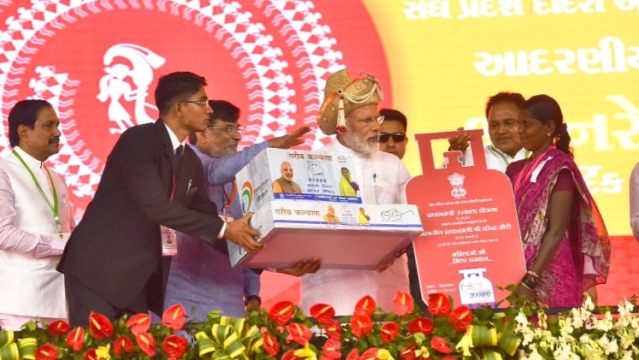 Much like a large section of the country, the state of Odisha too was long caught in a ‘chuli’ trap (chulha or earthern fireplace translates to chuli in Odia).

A majority of the population in the state have been using conventional cooking fuels such as firewood and coal which are extremely polluting. This trapped the women of Odisha in a vicious cycle of poor health and time poverty.

The implementation of the Pradhan Mantri Ujjwala Yojana (PMUY) has been able to break this vicious cycle of drudgery and health concerns, and the primary beneficiaries have been the women of the state.

In May 2014, only 19.7 lakh households had access to LPG connections. This tripling in the number of LPG customers in Odisha between April 2014 and April 2018 can mostly be attributed to PMUY, which did away with the barrier of high upfront costs in acquiring a new LPG connection.

The Ujjwala scheme was launched in May 2016 and under this scheme, women from poor households are provided access to deposit-free LPG connections. The women are identified through a transparent self-selection mode using Socio-Economic Caste Census data or seven categories including Scheduled Caste-Scheduled Tribes households, beneficiaries of Pradhan Mantri Awas Yojana (Gramin) and Antyodaya Anna Yojana, Forest Dwellers, etc.

Ujjwala has now proved to be successful in transforming the LPG ecosystem and the pace of cleaner fuel adoption in Odisha. Note that in Census 2011, only 9.8 per cent households in Odisha were reported using LPG as a primary fuel for cooking.

A closer look at the LPG adoption data and the stories from the ground indicate that by 2021, Odisha would no longer be in the list of energy deprived states.

Voices From The Ground

Kalpana Behera lives with her husband Purushottam, and children in Saliasahi, a slum settlement in Bhubaneshwar. She primarily depended on scrap wood collected by her husband for cooking fuel till she got an LPG connection under PMUY in mid-2016.

One of the key criticisms against the PMUY is that beneficiaries do not go back for refills. But many like Kalpana negate the criticism, and by June 2018, she had taken eight refills per year. Kalpana suffers from regular body pain which used to get aggravated when she ate cold pakhala (a staple dish in Odisha made of fermented rice and water).

The newly acquired gas connection now allows Kalpana to consume hot food. Importantly, she is now able to cook faster and use the time saved to run a small tailoring unit from home, and stitches blouses, petticoats and salwar suits for neighbouring customers, managing to add Rs 1,500- 2,000 a month to the family coffer.

In Athmallik block of rural Angul, Pakei Pradhan along with her son and daughter-in-law has started operating a small food cart in the Madhapur Panchayat. But most of the cooking happens in their small kitchen in their village of Mukundapur. The LPG connection obtained by Pakei allows them to run this business and the family has refilled their cylinder more than 10 times a year, between October 2016 and July 2018. They have completely moved away from their chuli.

When we visited Pakei in July 2018, she was very happy with the LPG connection but was worried that she was not getting the subsidy. Pakei opted for paying upfront for her gas stove and first cylinder, so she was eligible for getting LPG subsidy right from the start.

When the distributor checked her LPG account, it was found that the subsidy was regularly getting credited in her SBI account. Pakei had used the passbook of her Odisha Gramya Bank account while applying for the Ujjwala connection but she had opened an account in SBI immediately after getting the connection.

Since she had not started updating her SBI passbook regularly, she was not aware of the subsidy being credited in her account. The beneficiaries, both who pay upfront and who avail a loan for the connection and the first refill, are eligible to receive full subsidy for the first six refills, because the recovery of the loan through subsidy is being deferred.

While these two stories exhibit a complete switch to LPG, in most cases people are going through a mixed use phase. While LPG has found a place in their kitchens, fuelwood chuli has not completely moved out. Some people also use electric heaters in addition to these two cooking options. To understand the consumption pattern of the Ujjwala customers, it will be useful to look at the refill data of customers who have been in the system for a year or more.

In Odisha, between May 2016 and April 2017, a total of 10,43,899 PMUY customers were enrolled. When we see their refill records for the period of August 2017 to July 2018, we find that a total of 8,70,499 or 84 per cent have returned for refills. At 1,00,578 enrolments, Ganjam has enrolled the highest number of beneficiaries in the first year of the launch of PMUY. About 89 per cent of these customers have taken refills. In Khordha, 91 per cent of the PMUY customers have taken refills.

The movement towards cleaner fuel adoption in the state is a work in progress. LPG safety clinics and LPG panchayats are being conducted regularly and are contributing towards promoting safe and regular use. Safety clinics focus on educating smaller groups of customers (20-30) about the safe use of LPG. LPG panchayats bring together about 100 LPG customers on an interactive platform to discuss safe and sustainable usage of LPG, its benefits and the linkage between use of clean fuel for cooking and women empowerment.

Odisha has conducted 2,700 LPG panchayats till the end of October, 2018. These are conducted every month with every LPG distributor. In the medium term, the Petroleum Ministry and oil marketing companies need to continue their focus on enhancing delivery points, improving service, ensuring safety and educating communities about benefits of cleaner fuel.

Women are the immediate beneficiaries of a regular household expenditure on cleaner fuel and they need to ensure that their voice is heard loud and clear when the household budget is drawn up. The expenditure on LPG needs to be made a non-negotiable part of domestic finances and households need to align their cash flows with this to improve their ability to sustain the use of LPG.

Civil society groups and self help groups could lead the way in designing innovations to refill financing and enhancing opportunities to convert the time women are saving, into cash income through increased opportunities and wages. The escape from the chuli trap is a certainty now, and the Ujjwala Yojana is leading the way out.

Postscript: The central government has now extended the Ujjwala Yojana to all poor households without access to LPG connections. Originally, the scheme was meant to target women belonging to below poverty line households. The goal is to ensure penetration to 100 per cent households across the country.