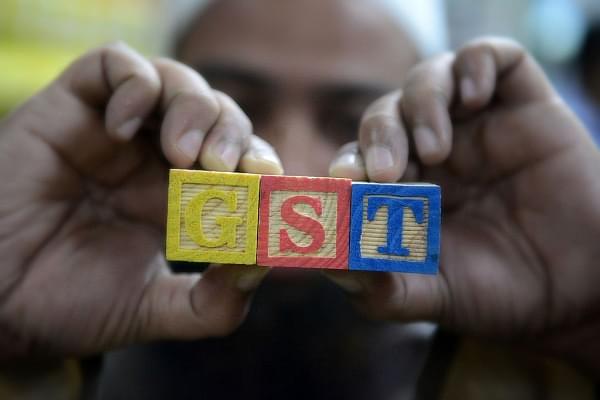 GST is a great reform, but answers to future challenges lie within the system itself. (NOAH SEELAM/AFP/Getty Images)

A year ago, the country got a new indirect tax system – the Goods and Services Tax (GST) – that subsumed more than a dozen different taxes, and inter-connected the vast but fragmented Indian market. The transition has been difficult, though expecting anything else for a political economy of 1.3 billion people would have been silly. Of course, being silly has never stopped our hordes of credentialed but incompetent “professional secondhand dealers in ideas” (to use that marvellous phrase by Hayek in his monograph The intellectuals and socialism).

The Narendra Modi government then certainly deserves credit for pushing through this reform by ensuring revenue certainty for some time to the state governments and by rolling it out fairly well so far, warts and all, in a country that has around Africa’s population and per-capita income!

For April 2018, the total gross GST revenue has already crossed $15 billion (1.03 lakh crore), a better number than many were expecting and should help with the fiscal deficit situation as well as infrastructure and human capital investments. Even adjusting for the “first month of the fiscal year” effect, (May 2018 revenue was a bit lower but still higher than last fiscal year’s average), we are off to a good start. However, in this essay, I will try to stick to certain first principles. Namely, how should we think about the GST? I propose to proceed with reference to three key points:

3. Federalism aka “same rates for all states?”

First, on growth: the GST is, other things being equal, decisively positive for long-term sustainable economic growth compared to the massively confusing “VAT + excise + service tax + octroi + other taxes and duties” regime that existed earlier. However, the Value Added Tax (VAT) in which you got an offsetting credit from your final tax outgo based on the taxes you paid on your purchased supplies - was itself an improvement compared to the even-earlier sales tax. Under the sales tax system, a corporation was artificially incentivised to backward integrate into its supply chain to prevent cascading taxes. That, of course, partially negated the very foundation of economic growth - division of labour, specialisation and consequent trade. The GST is expanding this VAT benefit in two directions: goods’ purchases across states, and to services’ purchases within (and across) states [See Ajay Shah: “A sound GST will also disrupt many vertically integrated firms and we will see more trades between specialised industries.”] This indeed represents India signing a revolutionary “free trade deal with itself”.

The second-order effect of growth is of course higher tax revenue – one through existing tax payers paying more, and second through the impact of formalisation (unorganised firms are finding it much more difficult to remain a part of larger supply chains without coming into the GST system). Indeed, around 11 million businesses are registered under GST out of which almost 5 million are new registrations! Finally, there is a tertiary impact of indirect tax returns being matched against direct returns through analytics, and consequent higher compliance there as well. Indeed, we have seen a bump in tax revenue though it is too soon to disentangle the various possible sources – GST, demonetisation, bottoming out of the business cycle, digitalization, other reforms etc. To conclude, the GST is good for growth, formalisation and state capacity although any one number about percentage increase in long- term growth should be taken with a pinch of salt. However, the GST has been criticised on grounds of efficiency itself because of the multiple tax rates – that point is addressed below.

Second, on equity: It is true that having fewer tax rates – or one tax rate to take the purist view – would be considered good for growth in the neoclassical economics’ view. Moreover, having less tweaking with rates by having fewer rates certainly reduces the chances of cronyism or political favouritism. But this should be weighed against two concerns: equity (or “progressivity”), and to a lesser extent inter-temporal allocation of resources – and finally, we must have a word about the Laffer Curve and how strongly or moderately it impacts indirect tax revenues as well. Let us begin with equity – indirect taxes are generally considered “regressive” because a poor person pays the same percentage of tax on his or her consumption as a rich person when they buy the same product. This, of course, accepts the normative view that the rich must not only pay more taxes but that they should pay a higher share of their income in taxes as well for the system to be morally legitimate.

Be that as it may, within that framework (and that framework is indeed dominant in all democracies, to varying extents) – it would be absurd to tax a luxury car and a piece of clothing at the same percentage (or ad valorem) levels. Every one, well almost everybody, needs to wear clothes. But everyone does not necessarily “need” luxury cars. This is especially so in a country such as India where relatively few people pay direct taxes. If many people did, as they do in advanced economies, then maybe we could have left the indirect “redistribution” through taxes to just the direct tax system. However, since direct taxes are not enough to run the Indian state, having multiple rates for the indirect tax system becomes necessary. Further, even if there were no equity concerns, a case can be made that incentivising savings and discouraging luxury or “conspicuous” or “sinful” consumption through tax rate tweaks (not crude bans etc.) may help economic growth (through more investments) or social stability or both (though, one must always be sceptical - but not cynical - when it comes to such social engineering). Last, just because equity concerns are valid does not mean we tax some goods to oblivion, for that will only hurt tax collection, and all kinds of unintended consequences will result. There is a point beyond which if we raise even luxury car (to again take the extreme example) tax rates, overall less tax revenue would result – and we should always remain below that point. The government in recent months has brought many products from 28 per cent to 18 per cent and so on, and this should help curb evasion and increase compliance – boosting revenues. Indeed, we are already seeing early signs of this (moreover, this also reduced inflationary pressures during the transition – which again, have been remarkably muted compared to other countries’ transitions).

Third and last, on federalism: The GST as it stands today has been a brilliant example of cooperative federalism and political leadership but it is still a potentially worrying development when it comes to competitive federalism – because states once they think beyond guaranteed revenues will realise that they still control spending but not tax generation policies, except collectively with other states and the centre. This is likely to lead to higher-than-otherwise but nonetheless lower quality expenditure at the state level, and the central government is likely to face the consequences of these misaligned incentives at some point. The good news is that whatever needs to be changed has been provided by the system itself – namely, the critical GST IT network (GSTN) which lets the government verify that what X Co. in Punjab said it bought from Y Co. in Kerala (or indeed in Punjab itself) was actually bought and at that price. Let me back up for a second. Earlier, there were no tax credits for inter-state purchases – instead a smaller tax was applied but with no refunds. Essentially, all states were enclosed political economies (hence, those “border” highway truck queues which are finally dwindling it seems) – so it was okay if they all could have different tax systems and rates. But now, with the market integrated, as a first step at least the GST reform has led all the states to have the same rate across states (for the same good or service of course). However, this need not be the case strictly speaking as the IGST (the inter-state GST) can now be “adjusted” against CGST or SGST (state or central components of GST) once the tax is fully implemented with the e-way bills in a way that earlier the smaller Central-VAT could not be adjusted against the bigger intra-state VAT. Hence, what matters is not the same rates across states but rather the verification of cross-state purchases!

This flexibility will become even more important as we start including alcohol, diesel, petrol and real estate under the GST – which is why some proposals are already talking about letting states levy additional duties if these items are included in the GST ambit. Hence, instead of having such a half-way house, why not have a dual but differentiated GST as I argued here in Mint almost nine years ago (and later expanded in Swarajya here). What this means is that the GST is a net-positive and indeed transformative reform which has been credibly rolled out given various constraints. However, more needs to be done. But competitive fiscal federalism should ideally be limited to each state just having an additional or lower tax (in terms of percentage points or a multiplier) rather than allowing each state to decide the relative tax rates of each good afresh, for that would lead to a serious proliferation of state-level corruption.

The GST rollout is an ongoing process and in one form or the other should keep our mandarins busy for years. However, it is more than worth all the short-term troubles for we as a country are finally able to leverage our size, our population and our internal market. Nonetheless, while growth will be boosted over time and equity concerns have been addressed – the federalism angle is more mixed. However, there is no need to “throw the baby out with the bathwater”, and whatever needs to be improved in the system has been provided by the system itself.