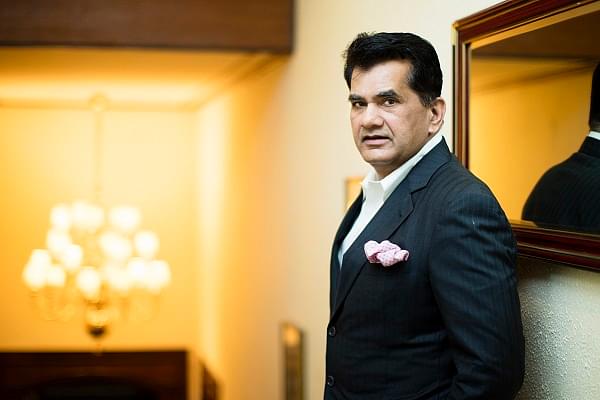 The productivity-linked incentive (PLI) scheme introduced by the Union government at an outlay of $26 billion (Rs 2 lakh crore) for the manufacturing sector can attract investments worth $520 billion (Rs 38.36 lakh crore), according to Amitabh Kant, Chief Executive Officer of Indian government think-tank NITI Aayog.

“We have been unable to take on global competition since our manufacturing does not match global standards in size and sale. We cannot do reforms with this. China has been able to penetrate the export market due to its production on global scale. We need reforms in labour, agriculture, mining, and coal,” Kant said addressing a Webinar on “Strategic Enablers and Policy Ecosystem for Atmanirbhar Bharat” organised by Swarajya in association with Vedanta Resources Limited. The session was moderated by Siddharth Zarabi, managing editor, NEWJ.

Stating that no “harder reforms” had been launched in the country since the 1991 economic reforms, he said that the Union government had used the opportunity presented by the novel coronavirus (Covid-19) crisis to unleash reforms in key sectors such as agriculture, coal, mining, defence MRO (maintenance, repair and overhaul) and space sectors.

One of the key decisions taken was to privatise power distribution companies (discoms) in union territories, while Odisha had taken the lead among states, the NITI Aayog CEO said.

Pointing out to the revision in definition of micro, small and medium enterprises (MSMEs), he said it would help in job creation in the country.

Referring to the PLI scheme launched as part of Atmanirbhar Bharat Abhiyan, he said the objective of the government was to support investors in enhancing their size and scale of production for five years.

“Atmanirbhar Bharat in no way implies protection but it is to help Indian companies take head on global competition,” he said.

“The government wants India to play a major role in global supply chains. For that, it is not looking inwards but trying to unleash the Indian companies’ potential. We need to learn from global experience like the policy Japan had for the automobile sector and Korea for household goods,” Kant said.

India wants to create larger companies that would be global champions, which in turn would support every small producer.

“We need to create an ecosystem where private companies enter, thrive and compete on the global stage. We should not be guilty of having companies of global sizes,” he said.

The companies that compete globally will have economies of scale and excel in quality to penetrate the global market.

“PLI is all about this. We have identified 10 champion sunrise sectors and PLI will focus on these,” he said.

India had earlier focussed in the mobile and electronics sectors and had encouraged Chinese and Korean companies to invest here. The 10 sunrise sectors identified by the government would attract investments, boost exports with cutting edge technologies and solutions.

“India was unable to penetrate the global market earlier as it was getting into the sunset sector. Seventy-five per cent of its exports were in the areas where global exports were 35 per cent such as textiles and food processing. This cannot yield results when global trade has evolved and moved into newer areas. Therefore, we had to look at sunrise areas for growth,” he said.

In particular, the focus on advanced chemical cell batteries would help development of electric vehicles besides drawing major global and local manufacturers’ investment in battery storage.

“This will be a game changer especially as the country heads to become a $5 trillion economy by 2025,” he said.

Similarly, the focus on telecom and networking products would attract global producers and ramp up production. The PLI scheme was also important for high-efficiency solar PV cells as it would help address security concerns.

“We have focussed on large building capacities for local and global companies with technologies that would be popular in the world five years down the line,” he said, adding that the policy would provide linkages to MSMEs and have an overall multiplier effect on the economy.

It would result in massive value creation, Kant said and added that the next set of reforms had to come from the states.

“Five to six champion states have to vigorously turn agents. Second, the power sector needs radical reforms that would bring down the cost of electricity,” the NITI Aayog CEO said.

Currently, the cost of power to the household sector is cheap, whereas it is costly for industries.

“The industrial units are cross-subsidising the higher household power cost. World-wide the industry gets power at a lower tariff, hence we need to push for reforms starting with privatisation of discoms,” Kant said.

The other aspect the Centre is keen on is the urbanisation of at least three-four key states. Stating that China had grown on the back of urbanisation, he said it should be well planned in India and sustainable.

“It should be dense, planned and compact. It will be the next biggest driver like the cities that have sprung up near Aurangabad and Ujjain. These have a huge potential,” the NITI Aayog CEO said.

He also called for using digital technology to bring down costs of logistics.

“We need to use digital technologies across transport sectors to reduce costs in a big way. We need to bring the size and scale of multi-modal transportation,” Kant said.

In response to a question comparing the Special Economic Zones (SEZ) scheme with PLI, he said while SEZ was about creating infrastructure, the PLI was targeted at increasing the size and scale of manufacturing.

“It is about incentivising in achieving global scales. Each year, they have to show that the scale has been increased,” he said, adding that it would also support relocation to scale up.

In response to a question on criticism of the PLI scheme, Kant said that India’s agriculture, services and manufacturing sectors had to grow on a sustained basis rather than just depend on the services sector.

“It is the first time we are thinking big on size and scale. It is enough if we created five global champions. They will create the ecosystem to grow on their own in the next five-10 years and support MSMEs,” Kant said.

He said that big companies were supported through the PLI scheme so that forward and backward integration takes place as in the case of Suzuki’s India plant.

The NITI Aayog CEO denied that the scheme will create a monopoly.

“There is no risk of monopoly. Japan has four-five automobile companies. It has not led to any monopoly. There is great competition among those companies (benefiting the consumer),” he said.

To a question on climate change, Kant said the focus on advanced chemical cell manufacturing will drive “mobility revolution”. He said battery storage was a new area of growth in which India will edge past China in the next three-four years.

Stating that reforms are tough to undertake in a democratic country, he said the Narendra Modi government was determined to carry out reforms across sectors. “It has shown the political will for hard-headed reforms. It is not easy to compete against China. India is attempting it for the first time,” the NITI Aayog CEO said.

Referring to the agricultural reforms, he said farmers were getting multiple choice to sell their produce.

“Why should farmers sell only in one place? That is the objective of the reforms,” he said.

He also discounted China enjoying a monopoly in the raw materials for electric vehicle batteries.

“We need not worry since it has only 11 per cent of the material. It is possible to capture the rest 88 per cent of value across many countries like Australia. We will not face any lithium, nickel or cobalt shortage,” Kant added.