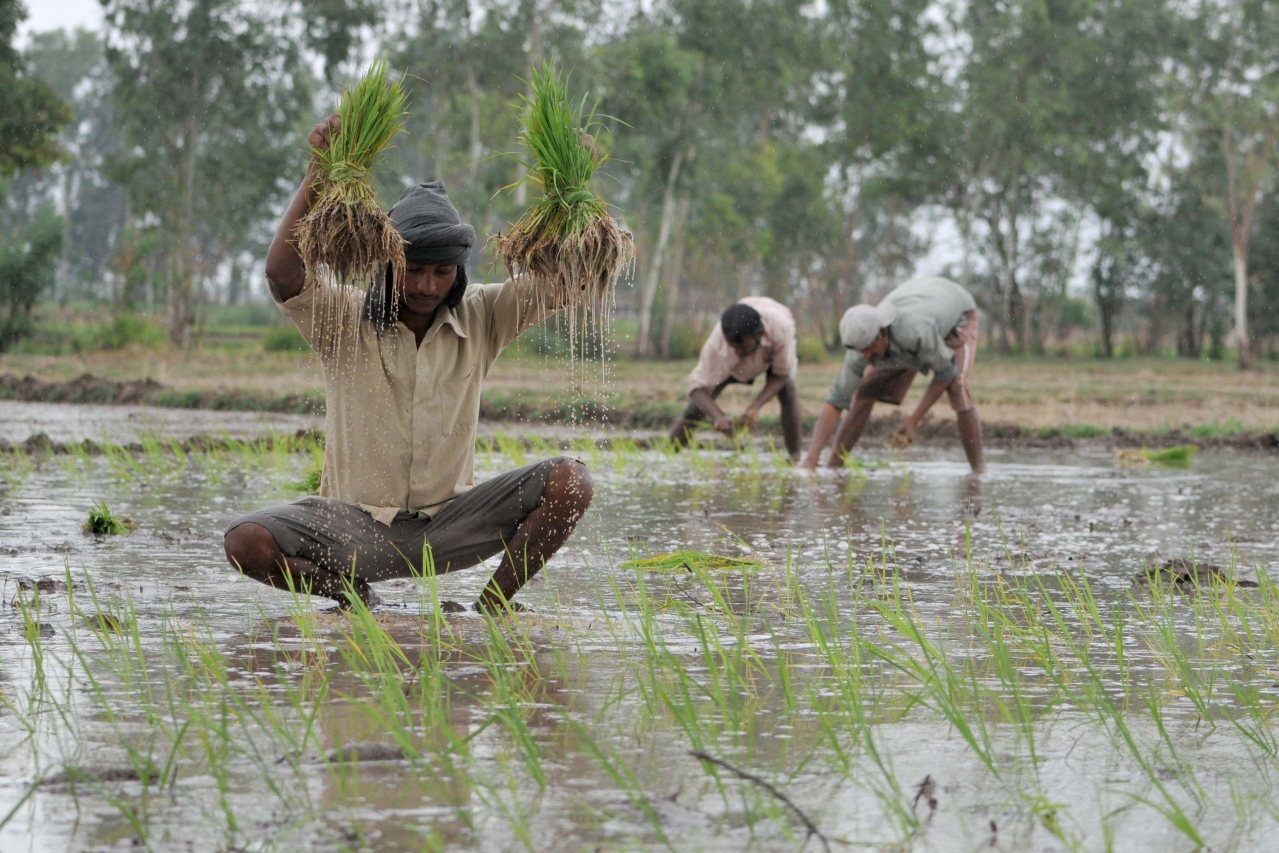 In the end, this had been coming. Finance Minister Piyush Goyal, standing in for an ailing Arun Jaitley, announced during the Interim Budget for 2019-2020 that the Centre would provide a direct income support of Rs 6,000 a year to farmers having less than two hectares of land.

The scheme is backdated from 1 December 2018 and the first installment will be paid before 31 March, that is, in the current financial year. The second and third installments of the amount will be paid next fiscal starting April.

This allocation now sees the Centre, emboldened by higher tax collections, revise its estimate higher for the agriculture sector by Rs 20,000 crore.

Earlier this week, Congress president Rahul Gandhi jumped the gun to announce that if his party returns to power, it would provide a minimum guaranteed income for the poorer sections of the society.

However, neither did Gandhi say the amount that would be provided nor did he have anything on the criteria to be applied for it.

When Gandhi made the sudden announcement, it was obvious to those who put on their thinking hats that provisions of the interim Budget for the 2019-2020 fiscal were leaked out.

In an article on 27 December 2018, Swarajya had dealt with two options for the Centre to help farmers. One of the options was to provide financial assistance like the Telangana government, which gives Rs 8,000 a year per acre. The assistance is reported to be benefiting some 58 lakh farmers in the newly-created state.

It seems now that the Narendra Modi government has opted to look at the Telangana model but has tweaked it to some extent.

First, the criteria is clearly laid out — farmers who own less than two hectares. Goyal said the direct income support would benefit 12 crore farmers.

According to 2015-16 agricultural census, micro and small farmers who own less than two hectares make up 86 per cent of the total farmers in the country. These farmers, however, account for 47.3 of the crop area in the country.

If you look at the number of these small farmers state-wise, there is no doubt that the Modi government has made a cool calculation. Data show that Uttar Pradesh makes up 2.38 crore of these micro and small farmers, Bihar accounts for 1.64 crore and Maharashtra 1.47 crore.

Nationally, this may prevent suicides by farmers due to farm distress, though there are other factors at play for the farm deaths.

Combined with the National Democratic Alliance (NDA) efforts to achieve 98 per cent rural sanitation coverage with 5.45 lakh villages being declared open defecation free and supply of cooking gas connections to the rural masses, the announcement of income support could come in handy for the government big-time during the Lok Sabha elections due later in May.

The announcement is silent on various subsidies that are being extended to farmers across the country. This could mean that the subsidies are being left untouched.

Goyal has also come up with a provision to give two per cent interest subvention for farmers facing severe natural calamities like drought and flood, a key factor for states like Maharashtra, Madhya Pradesh and Bihar. 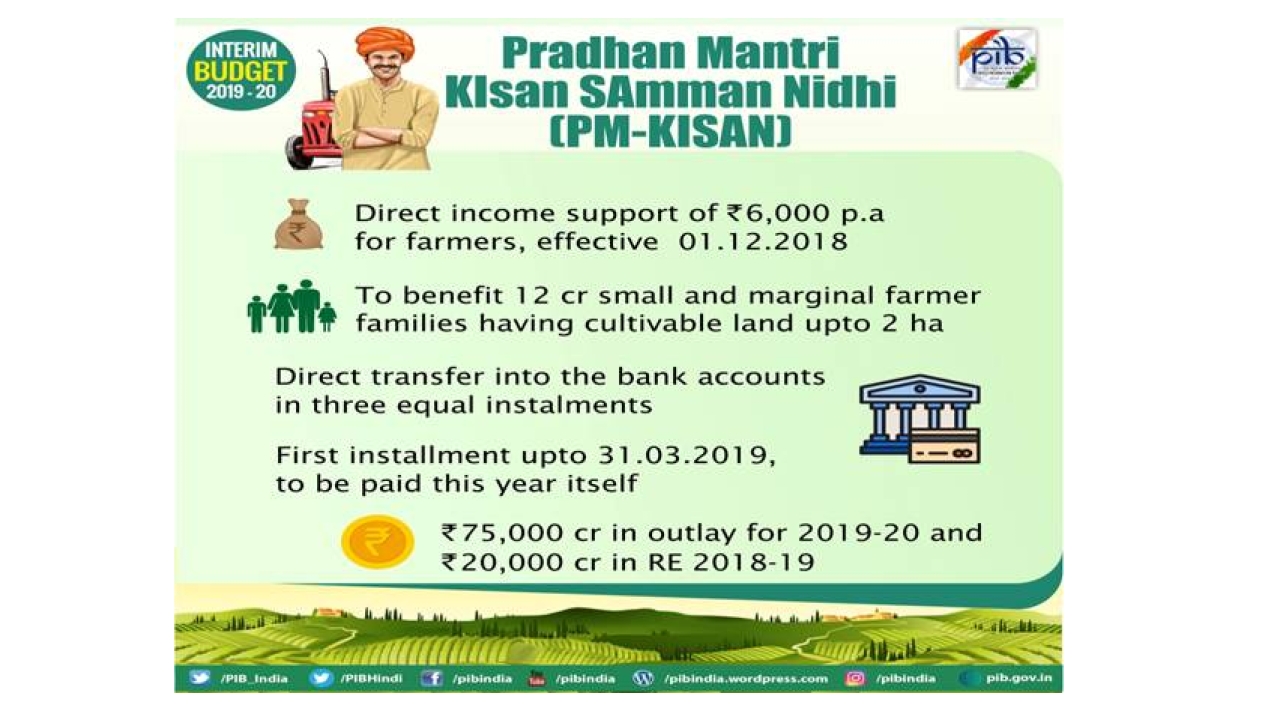 More importantly, the Centre is encouraging timely payment of loan and interest by farmers. It will given an additional 3 per cent interest subvention to farmers for timely payment. This should satisfy farmers who have been paying their dues on time but have been upset by recent spate of loan waivers for their community.

Another important announcement in the Interim Budget is meeting a long time demand of the fisheries sector — to set up a separate department. Till now, fishing was part of the Animal Husbandry Department.

A separate department means special focus on the sector that holds promise. It will also help to tackle various trade barriers put up by the developed nations.

The seafood sector is a sunrise industry that has earned a record $7.8 billion last year through exports. A new department is a step in the right direction.

The Centre has announced a 2 per cent interest subvention to animal husbandry and fisheries sectors that will help cattle farmers and fishermen alike.

The higher allocation of Rs 750 crore for the Rashtriya Gokul Mission to increase production and productivity of cows is in line with the political philosophy of the Bharatiya Janata Party that heads the government.

Other initiatives like Rashtriya Kamdhenu Aayog to sustain genetic upgradation of cow resources is also aimed at the Hindutva gallery.

If there is an overall feel good factor in view of the tax exemptions announced in the Interim Budget, the announcement for farmers and agriculture sector should supplement efforts to boost economic activity.

For all that the Congress and opposition have been criticising the Modi government, the Finance Minister has come up with a response that has found them dumb-founded. Game on!