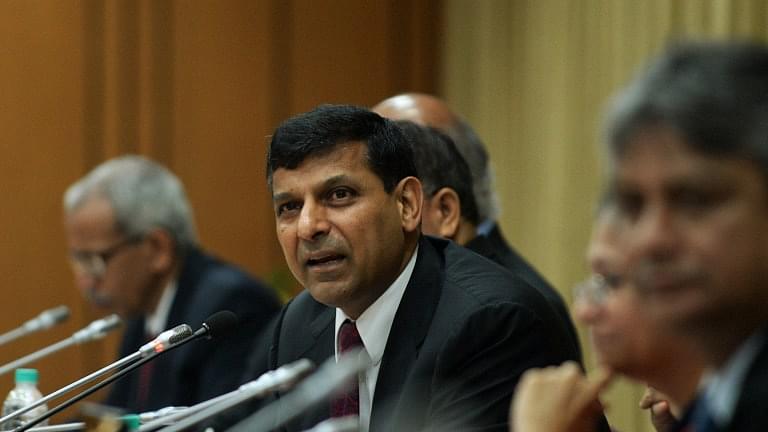 The Reserve Bank Of India (RBI) Governor, Raghuram Rajan, was in Bengaluru yesterday (22 June) to deliver a speech on ‘Resolving stress in the banking system’ at a meet organised by Assocham.

He argued that the slowdown in credit growth has been largely because of stress in public sector banking and not because of high interest rates. To back his argument, Rajan came well prepared. He used charts to elucidate his reasoning.

Various critics of Rajan allege that his monetary policy of keeping interest rates high is choking growth in the country. They say that this is especially hurting micro and small enterprises adversely. Are they right? Let’s look at some charts Rajan used to punch holes in his critics’ rationale.

Some may have an urge to perhaps lay the blame on lack of bank capital. Maybe there is no demand for credit. But hold your horses. Rajan has two more charts to burst that bubble too.

“In sum, to the question of what comes first, clean-up or growth, I think the answer is unambiguously “Clean up!,” he added.

Could it be more clear?

#1 Many bad loans were sanctioned during 2007-08 when the economy was expanding fast and growth was skyrocketing. Rajan says banks extrapolated past growth and performance to the future. Their indiscretion in lending can be judged from the fact that many lent based on project reports by the promoter’s investment bank, without doing their own due diligence. As growth tanked, and policy paralysis set in in the bureaucratic setup, even good loans turned bad.

This was bad decision making. But, in many cases, actual fraud was also committed “by diverting funds out of a company, either through over-invoicing imports sourced via a promoter-owned subsidiary abroad or exporting to related shell companies abroad and then claiming they defaulted.”

#2 Rajan says that indiscretion in lending can be compensated for by careful post-lending monitoring, including careful documentation and perfection of collateral, as well as ensuring assets backing promoter guarantees are registered and tracked. But even this wasn’t done. Instead of stopping infusing equity when the signs were not good and projects looked unviable, banks kept throwing money by issuing fresh loans.

Collection of loans remains tricky for banks, especially when the promoter is politically well connected. However, Rajan hopes that speeding up the functioning of Debt Recovery Tribunals would definitely help. The reform is pending in parliament.

What is RBI doing?

First, the RBI created a large loan database (CRILC) that included all loans over Rs 5 crore, which it shared with all the banks. The CRILC data included the status of each loan – reflecting whether it was performing, already an NPA or going towards NPA. That database allowed banks to identify early warning signs of distress in a borrower such as habitual late payments to a segment of lenders.

The second step was to help lenders coordinate through a Joint Lenders’ Forum (JLF) once such early signals were seen. The JLF was tasked with deciding on an approach for resolution, much as a bankruptcy forum does.

Third, to stop restructuring of unviable projects by banks, the RBI ended the ability of banks to restructure projects without calling them NPA last year.

Fourth, the RBI introduced the Strategic Debt Restructuring (SDR) scheme so as to enable banks to displace weak promoters by converting debt to equity. To make sure that the banks do not own projects indefinitely, a time-line was set for them to find a new promoter.

What the government is doing

Rajan says that in the long run, speeding up the debt recovery process and creating a new Bankruptcy system will help improve the resolution process.

However, in the short term, two actions will pay large dividends.

First, improving the governance of banks. The government is already doing this. The Indradhanush initiative will make sure that public sector banks stay healthy once they come out of the NPA coma. “Breaking up the post of Chairman and Managing Director, strengthening Board and management appointments through the Banks Board Bureau, decentralising more decisions to the professional board, finding ways to incentivise management, all these will help improve loan evaluation, monitoring and repayment,” Rajan reasons.

Second, is infusion of capital. Rajan says that this should be linked to the performance of banks so that those improving fast are incentivised.

However, the governor warned against the growing calls for using the central bank’s reserves for recapitalising banks. He said it’s a non-transparent way of proceeding, getting the banking regulator once again into the business of owning banks, with attendant conflicts of interest. He suggested that a better way may be for the RBI to give all its surplus earnings to the government in the form of dividends. “In the last three years, we have paid all our surpluses to the government,” he said.