SBI On Growth Rebound: The Worst May Be Over But Hurdles Remain

The State Bank Of India (SBI) in its Ecowrap report on 29 November had predicted that economic growth in second quarter (Q2) of fiscal year 2017-18 would be in the range of 6.3-6.4 per cent. The economists at SBI were right. Gross Domestic Product (GDP) growth increased to 6.3 per cent in Q2 from 5.7 per cent in Q1. Additionally, Gross Value Added (GVA) accelerated to 6.1 per cent in Q2 as against 5.6 per cent in Q1, thanks to impressive growth in manufacturing (7 per cent), electricity, other utility services (7.6 per cent) and trade in addition to hotel, transport and communication sub segment (9.9 per cent).

As SBI’s earlier report had hinted that on account of positive growth in Corporate GVA, growth in the manufacturing sector was bound to pick up. And indeed it did, posting 7 per cent growth. As far as industry sector is concerned, except construction, the growth accelerated amounting to sectoral growth rate of 5.8 per cent. The sector had posted a measly growth of 1.6 per cent in Q1.

Increased coal produced helped boost growth in mining and quarrying sector to 5.5 per cent. This segment had registered a negative print of 0.7 per cent in Q1. Though construction sector also picked up pace, but way below what it should be, and hence a cause for worry.

Another major cause for concern was deceleration of growth in the services sector. While it registered a growth of 7.8 per cent in Q1, in Q2, this pace slowed down to 7.1 per cent. It was 8.7 per cent in the same quarter last year. 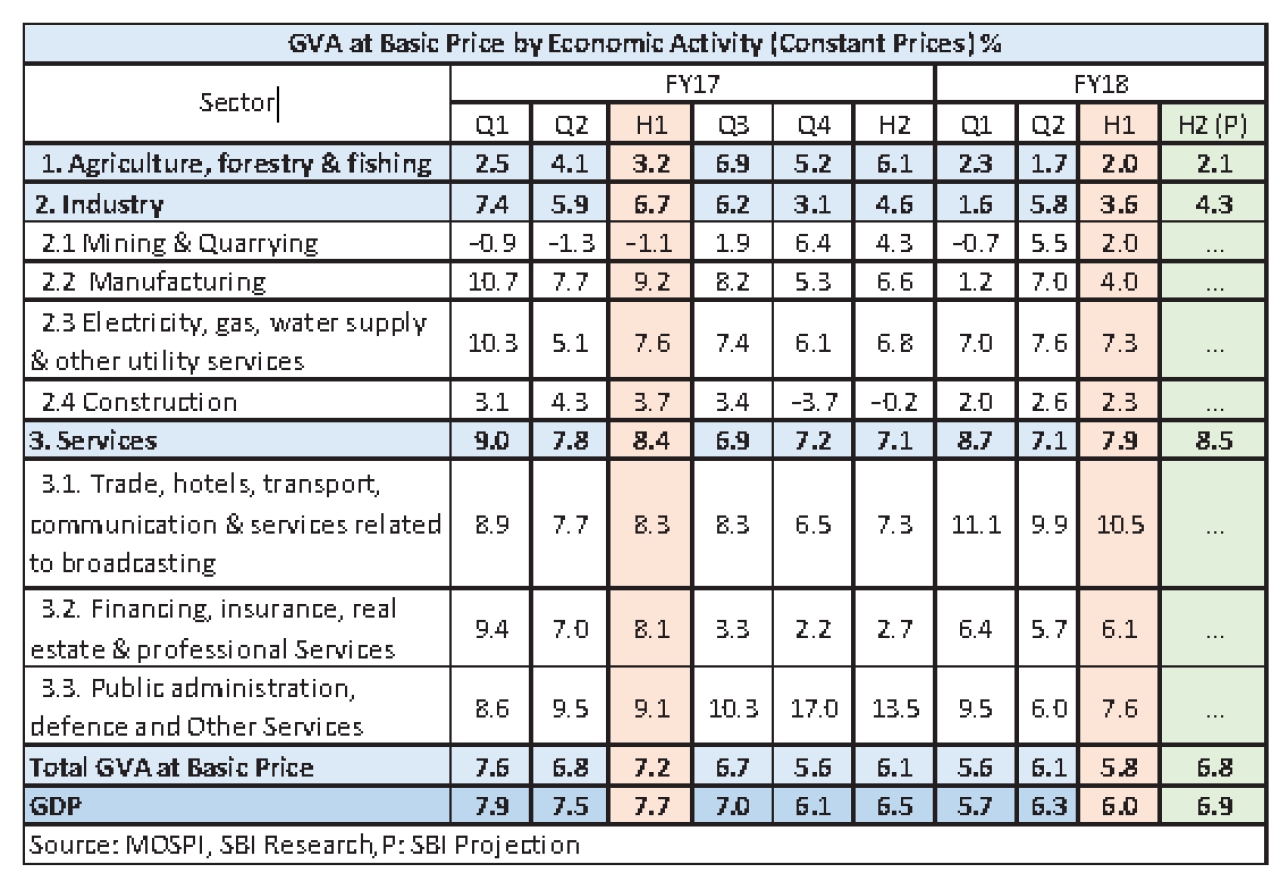 One interesting development is that non-farm, non-government output is picking up pace. This part of the economy grew by 6.8 per cent compared to 5.5 per cent in Q1 and 3.8 per cent in Q4 of last fiscal. It means that the Indian economy is no more dependent on only one engine, that is government expenditure. This development couldn’t have come at a better time when the scope for government expenditure was contracting by the day. By October-end, over 96 per cent of the budgeted annual amount has already been accounted for, leaving little space for any boost from the government side.

SBI report notes that the GVA is slowing and the value added originating from the rural sector has slowed more sharply than the urban sector. “Overall the source of growth in the first half has been the urban areas and making allowance for the fact that rural inequality may have increased the impact of slowdown is more pronounced from the aggregate,” it added. Agriculture sector grew only by 1.7 per cent in Q2 as against 2.3 per cent in Q1. The economists at SBI prescribe that the rural focus of the last two budgets must continue in the next one as well. The report takes into account the fact that cumulative rainfall for three major food grain producing states was in huge deficit [Uttar Pradesh (29 per cent), Haryana (26 per cent) and Punjab (22 per cent)] and hence estimate that agricultural growth would be in the range of 2-3 per cent in the remaining quarters.

As far as new projects are concerned, they also declined substantially in Q2. Comparing the number of new projects in first half of this fiscal and last fiscal shows that they have almost halved this time.

Verdict? The worst may be over but the economy is yet to cross a lot of hurdles.

Get Swarajya in your inbox everyday. Subscribe here.
Tags:
73 Shares