Soaring Oil Prices: Is There A Solution That Makes Everyone Happy? 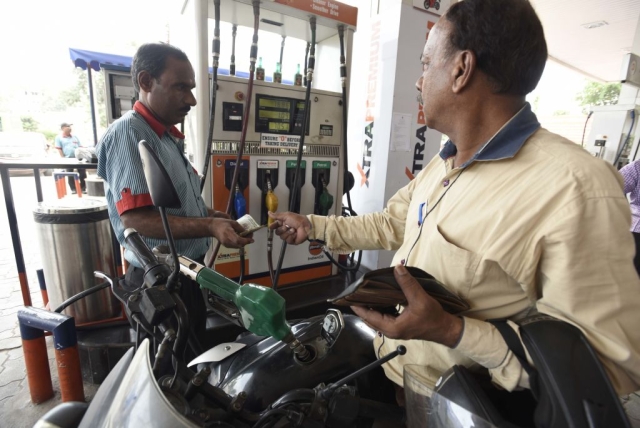 There is no oil shock for the Indian economy, as yet, and it looks unlikely it would be so. So, despite intermittent reports to the contrary, one expects the government will not draft any short horizon plan to cushion the consumers from the relentless price rise of petrol, diesel and cooking gas. Except for a plain vanilla cut in the excise duty, any such plan would imply a step back from the commitment of Narendra Modi-led government to free the price of fuel to move with that of demand and supply and hence sub optimal for everyone concerned.

One of the distinguishing traits of this government has been its capacity to stay the course on reforms that Indian economy needs. Reforms in the fuel economy has been one of the massive achievements for India. It has helped the economy to cut fiscal pressures, that in turn has helped reduce borrowing costs for industry and small borrowers. By insulating government finances from the gyrations of fuel prices, a huge black market economy in oil has got curbed. The reforms were started by the Atal Behari Vajpayee government, rolled back by Manmohan Singh government in the first term, but again agreed to by him in his second term, partially when petrol prices were linked to market prices. The Modi government picked up the nerve to bring diesel into it and subsequently a large element of cooking gas prices too.

The Indian economy, always perilously short of oil and gas, had waited for long before it could remove the shackles of price control from the fuel economy. The wait had wrested huge political economic consequences. The controls had played a key role in the rise of crony capitalism in India. So domestic consumers paid stiff prices for filling up their fuel tanks in a pricing regime, by paying for petrol at prices that subsidised diesel, cooking gas and kerosene. The upshot was it created a pricing environment in India, so short of crude oil to import million of barrels from the Middle East, only to refine and then export the entire consignment to South East Asian countries. With the foreign exchange India earned from these deal, the economy then bought more oil to feed to her domestic consumers.

A market-based pricing of oil has removed these crazy incentives. It instead creates a situation where the domestic consumers know each day what is the price of crude and pays at the petrol bunk accordingly.

Already, this month, thanks to the Karnataka elections, the government had temporarily walked back from this commitment. It forced the oil companies to forego the system of daily calibration of oil prices and instead wait for the votes to be polled. This caper cost the oil companies Rs 350 billion.

One of the reasons, why despite the sharp rise in the retail price of petrol and diesel and the expected rise in prices of both subsidised and market-priced bottles of cooking gas, few are complaining, is that the economics is transparent. The price of oil India imports has risen, and that is there for all to see. From there to the oil bunks is a straight pass through.

But pressures are building up. A report quoted by Business Standard from Pranjul Bhandari, chief India economist at HSBC Global Research notes: “headline inflation will be 5.4 per cent while the combined fiscal deficit (centre and states) will touch 6.2 per cent if oil averages $80 over the year”.

This is predicated on the assumption that the Centre would soak in some of the rise in the price of crude by expanding the fuel subsidy. The only way it can do so is to hurt the balance sheets of the state-run oil companies. If it is Oil and Natural Gas Corporation and Oil India, the exploration companies, it could be worse, as these companies are supposed to be the anchor investors in the fields opened up under Oil Acreage Licensing Policies in May.

Downstream, Indian Oil Corporation, Hindustan Petroleum Corporation Limited and Bharat Petroleum Corporation Limited have less investment commitment but cutting their strength works against the government’s policy of creating a oil behemoth that can secure favourable oil deals abroad. One of the reasons India has fared so badly in the global oil sweepstakes is its reluctance to build up state-run or private sector energy companies that can compete globally. In the forthcoming public issue of Saudi Arabian company Aramco, India has not figured in any of the prospective deals simply because its companies carry so puny purses. Whittling those down further, offers no service to the economy as this is neither the first spell of rising oil prices and certainly not the last.

And this brings to the larger question of oil politics. The Middle Eastern countries, notably Saudi Arabia, Kuwait and United Arab Emirates have been spooked, with what declining oil prices could do to their finances and consequently on the hold the rulers exercise over their economy. Saudi Crown Prince Muhammad Bin Salman, as chairman of Aramco, was rattled once he realised how deep would be the cut in the valuation of the world’s largest oil producer due to the dip in price of oil. The company pays for much of the glitter of Saudi Arabia and no one there will want to walk the road of lower oil prices, as long as they can hold out.

What does this portend for rest of the world? Since Europe is clearly shutting down on its hunger for oil, the oil producers need China and India to guzzle more and at the maximum prices they can afford to pay. Consequently, it is a brutal game in which the buyers and sellers are engaged in.

In the scenario, what are the options for the government and the consumers? A cut back in the excise duties by the Indian government is the least of the pain the state can afford to inflict at this point. But it begs the question, if the pain points would go away from now. The prices, as we saw, are unlikely to come off the highs and could mount. The chances are they would mount as the yields on 10-year US bonds are rising. Pricing of commodities are deeply linked to the prices of US benchmark securities. As the US Federal Reserve raises interest rates further, those yields would soar.

In this global environment, as the Indian state gives away some of the tax, it becomes less able to pay for the barrels. A weaker fisc would clip back at the value of rupee. What the consumers would gain at the petrol bunk they would give up in the higher price of other tradable items, as in intermediate goods like coal or finished products like electronics. Instead, will it not be better if the government is able to tamp down on retail inflation by keeping a larger purse to pay for imports of commodities where shortages may arise. It has done this so far at 4.58 per cent for April, though it is 0.29 per cent higher than March. A lower tax on petrol would not arrest inflation and could instead add fire to it, as the state loses its ability to keep its fisc in control.

I am not discussing the goods and services tax option, as that has been dwelt with here and here. There is certainly merit there. It is a proposal that must be pushed through and now is a splendid opportunity to do so. But what should be the rate? And states which have oil tax rates lower than the proposed rate would have a hard time explaining to its citizens why prices have actually climbed.

But any other option that attempts to hedge oil prices with a safe harbour like option that shaves money off the oil companies would be highly counterproductive for the economy.