Target Rs 1 Lakh Crore: Jaitley Should Go For Another Round Of Big Bang Disinvestment In 2018-19 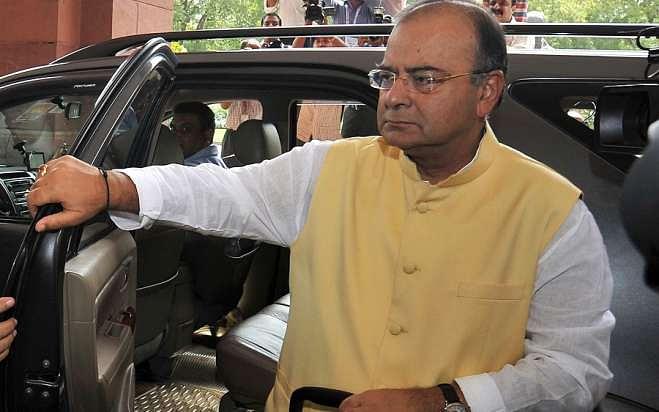 Since liberalisation of the economy in 1991, the Union government has met its disinvestment target only four times in the last 27 years, including the four years of Modi government. The last time the government accrued more receipts than it accounted for in the budget was in 2003-04, when Atal Behari Vajpayee’s National Democratic Alliance (NDA) was in power. Despite this history, the Finance Minister set an ambitious disinvestment target of Rs 72,500 crore in this year’s budget. Of this, the government set out to raise Rs 46,500 crore by selling minority stake in public sector undertakings (PSUs), Rs 15,000 crore from strategic disinvestment and Rs 11,000 crore from the listing of various PSUs, mainly insurance companies and defence units. Strategic disinvestment involves sale of significant shareholding, including management control.

As on 22 January, total disinvestment proceeds during the current fiscal stood at Rs 55,560 crore, thanks to the Bharat 22 ETF, which raised Rs 14,500 crore, and two big listings of General Insurance Corporation (GIC) and New India Assurance, which raised over Rs 16,000 crore between them. The total amount will soon zoom past Rs 92,000 crore as soon as State-run oil firm ONGC finishes the process of buying 51 per cent stake in another government owned company HPCL for Rs 37,000 crore. To put this in perspective, the total money accrued to the government from all disinvestment last fiscal was merely Rs 46,000 crore. However, this achievement doesn’t appear that impressive when one realises that ONGC buying stake in HPCL for Rs 37,000 crore is simply a case of the government moving money from its one pocket to another.

Also, as Shankkar Aiyar points out in his column today, ‘accretion of Rs 17,357 crore in this year’s receipts would not have been possible without the intervention of Life Insurance Corporation.’ That means almost 60 per cent of total disinvestment receipt is result of financial jugglery. As Swarajya pointed out earlier, this is the kind of budgetary fudge the United Progressive Alliance (UPA) government was famous for, and it is a pity that the NDA government has also had to resort to the same tactic to show it is sticking to the fiscal reduction path.

But warts and all, given the history of disinvestment, the figure of Rs 92,500 crore is sure to make the government feel good about itself. More importantly, it will buoy its spirits to be bolder in setting bigger targets in future. Various analysts are estimating that Arun Jaitley can set a disinvestment target anywhere between Rs 60,000 crore and Rs 1.2 lakh crore in 2018-19.

The government has very good reason to set a target of Rs 1 lakh crore + in the next fiscal for disinvestment. It’s an election year with many big and important states going to polls. It is also the government’s last full budget before general election in 2019. The spending on social sector will need to be boosted substantially. The results in Gujarat proved that it is imperative to address rural distress - real or imaginary. But Jaitley is a stickler for fiscal consolidation. The roadmap followed by him so far is indeed impressive. Though, it is unlikely that the government will be sticking to its earlier promise to bring down the deficit to 3 per cent from 3.2 per cent in next fiscal. This is not a big slip. Bu nor is this sufficient to allow room for big spending push. So something got to give. This is why disinvestment target matters and we can expect big bang announcement on this front in the budget on 1 February.

In fact, this is one way many economists at a meeting with the Prime Minister recently had suggested to the government so that it doesn’t deviate from the path of fiscal discipline. Bankers are also hoping the government will aim high the next fiscal. According to this report in The Hindu Business Line, “Citigroup and Deutsche Bank estimated asset-sale proceeds would top ₹1 trillion, while Credit Suisse, Goldman Sachs, Macquarie Bank and Morgan Stanley forecast ₹650 billion to 900 billion.”

But how realistic is Rs 1 lakh crore target? It doesn’t appear impossible looking at what the government has in the pipeline for the next year. Most likely, Air India will be sold off in the 2017-18 given the pace at which the central government is moving.

Apart from this, the BL report notes that four state-run companies ‘including guided weapon systems maker Bharat Dynamics and engineering consultant Rites Ltd have filed preliminary applications in the past month for initial public offerings’ which are likely to materialise next fiscal.

According to Reuters, the government may be looking to sell stake in as many as 20 companies. It has already sought advisers to help it through this process. Secondary sales of 3 per cent stake in Indian Oil and 10 per cent stake in Coal India, and an IPO in Hindustan Aeronautics are also on the anvil. The government has already named banking advisers for these deals. Based on current share prices, the government may get around Rs 24,000 crore from stake sale in Indian Oil and Coal India alone.

The government took two general insurance companies public in 2017, and is planning to list another three in coming months, at least one of which is likely to fetch monies in next fiscal itself.

The government owns private sector equity worth more than Rs 50,000 crore through its vehicle SUUTI. In 2016-17, it divested equity of Rs 4,153.65 crore under ‘strategic disinvestment’. It is likely the government will keep tapping into this in future too.

What else? The government will be well advised to cash out its LIC booty soon. If it doesn’t do so, it will be left with another GIC or New India Assurance, or, worse, an Air India or BSNL, with no LIC left to bail them out.

A big bang listing of LIC in the first half of the next fiscal will fetch the government nothing less than Rs 50,000 crore in one shot for a share sale of upto 25 per cent, depending on market conditions. Waiting will mean losing a lot of the value. If the UPA had listed BSNL at the right time it would’ve got three times as much money as it would do now. The NDA government shouldn’t repeat the old mistake.

The government’s big success on disinvestment front this year shows that Rs 1 to Rs 1.2 lakh crore target is very much within reach if it sets its heart to achieving it.