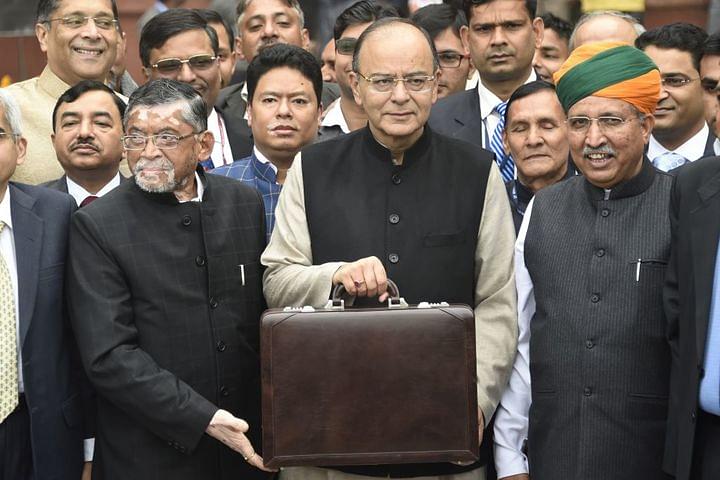 Arun Jaitley's Union Budget for fiscal 2017-18, his fourth, is notable precisely for its lack of fireworks. Given the context of demonetisation and the need to stimulate growth, the budget did not propose major concession to too many sectors, barring real ‎estate. In fact, Jaitley passed up the opportunity provided by DeMo and a forthcoming shift to a goods and services tax (GST) regime to break out of the fiscal deficit straitjacket. He accepted the 3 per cent target for 2017-18 as one he will try to achieve while giving himself leeway up to 3.2 per cent, which is lower than 2016-17's target of 3.5 per cent. The direction of fiscal consolidation is consistent and prudent.

The broad thrust of the budget is incremental, pushing government spending to rural areas and infrastructure, expanding the tax base, widening the digital footprint of the economy to contract the black economy, starting the process of cleaning up political funding, and boosting jobs by targeting tax cuts towards smaller companies and the realty sector. Big corporations can breathe easy that they didn't get any additional blows, though the promised corporate tax cut to 25 per cent has been limited to companies with turnovers up to Rs 50 crore. The Modi government, it seems, is trying to counter the perception that it is pro-big business and "Dhanna Seth".

The bringing forward of the budget from end-February to 1 February, widely seen as an effort to throw sops in the direction of poll-bound states, did not contain enough populism to shift the needle in the direction of the ruling dispensation by more than a fraction. The speech had political intent, with farmers, rural sector, small businesses, and sundry others being singled out for small concessions, but ‎its content was pragmatic, not populist.

Surprisingly, even though the budget was presented in the context of demonetisation (DeMo), Jaitley made very little mention of it beyond saying that the negative economic impact would be transient. Clearly, he does not share the doubts of his Chief Economic Advisor Arvind Subramanian, whose Economic Survey yesterday had more iffy things to say about it. In fact, Jaitley chose to grandly lump DeMo in the same category as GST, calling these two reforms as efforts to create a "bigger, cleaner and real" economy.

Here are some highlights and themes in Jaitley's budget.

First, infrastructure. Thanks to the merger of the railway budget with the main budget, Jaitley was able to present a consolidated picture of the centre's infrastructure spending - Rs 2,41,000 crore, of which the bulk was in railways (Rs 1,31,000 crore). Highways got Rs 64,000 crore. But no fare or freight hikes were announced to indicate where the money would come from. The chances are the money is going to be moved around from low impact areas to higher impact ones.

Second, ‎tax base expansion. With DeMo expanding the tax base, Jaitley avoided the temptation of raising the basic exemption limit from the Rs 2.5 lakh. Instead, he has cut the lowest tax rate to 5 per cent from 10 per cent, and provided tax relief for those in the Rs 2.5-3 lakh income brackets. With DeMo providing lakhs of cash inflows into bank accounts, the government is planning to use this information to get many, many more people to join the taxpayer base. The lowering of the tax rate to 5 per cent is intended to entice more evaders at the bottom end of the income pyramid to join taxpaying community. This is the right strategy to expand the tax base.

Third, fiscal prudence. Apart from the decision to keep the fiscal deficit at 3.2 per cent, the finance minister also consciously decided to keep borrowing next year lower than in 2016-17, and proposed to raise more money from disinvestment (over Rs 72,000 crore). The latter target sounds dicey, unless the idea is to sell the large chunks of ITC, L&T and Axis Bank shares held by SUUTI and the balance shares of HZL and Balco held by it. If these sales happen, the target is not unachievable. Caution: the government has almost never hit its disinvestment target in the recent past.

Fourth, no market shocks. Before the ‎budget, there was apprehension that the government may raise capital gains taxes. No such thing happened, and the government in fact reduced the qualifying period of long-term gains in immovable assets to two years from three years. The only disappointment was the lack of a corporate tax cut for big corporations to 25 per cent - a promise made two years ago. But India Inc has been given some leeway in minimum alternate tax carryforwards.

Fifth, focus on the midi sector. The tax cut to 25 per cent is only for companies with turnover of up to Rs 50 crore. And loans to the SME sector through Mudra Bank are to be bumped up to Rs 2,44,000 crore. These are job creating sectors, and to that extent the concessions are conducive to jobs growth. But these sectors were also victims of DeMo, and so the sops are compensation for losses as well.

Sixth, agriculture and rural growth. The Finance Minister seems to be shifting decisively to a rural focus. He promised a push to enable contract farming and moves to denotify perishables from the purview of the Agricultural Produce Marketing Committee (APMC), which means these agricultural commodities can now be sold nationally and escape the clutches of middlemen. Some 585 APMCs will be electronically connected, so that farmers have better price information. The goal of doubling farm incomes is obviously being attempted by creating a more national market for agri-produce in stages, improving rural road connectivity, and focusing MGNREGA spends to creating micro irrigation options by digging lakhs of ponds - with the assets being created being verified by geotagging by satellites.

Seventh, pressure on black money. In keeping with Modi's promise of reducing black money, Jaitley announced a plan to enable government to confiscate the assets of people seen as absconding after evading Indian law. The targets obviously are people like Vijay Mallya and Lalit Modi, both of whom were seen as having evaded Indian laws by relocating to the UK from where extradition is difficult. Nothing much may come of this, but the political messaging on being tough on loan defaulters or law breakers is impossible to miss. The law to reduce contributions in cash to political parties to Rs 2,000 (against Rs 20,000 now), and the plan to float electoral bonds which guarantee anonymity to donors by cheque are important signposts on the road to cleansing the political system. More needs to be done, but the journey has begun.

Eighth, financial reforms. The biggest announcement was the abolition of the Foreign Investment Promotion Board (FIPB), an institution that is seen more as a hurdle to foreign investment than something that promotes it. ‎In a year in which foreign inflows are considered iffy due to rising interest rates in the US and the protectionist rhetoric of Donald Trump, this is like a new welcome mat for long-term foreign investment. A big ticket merger in the oil sector - possibly ONGC and Indian Oil - may create space for more foreign investment in a mega company. With the last exchange traded fund for central public sectors enterprises being a sellout, Jaitley promised more. With banks now making treasury gains from the fall in bond yields (and hence capital gains on market prices), Jaitley provided only Rs 10,000 crore for bank recapitalisation. Bank stocks thus rallied after the budget. There are enough signals for foreign and domestic investors to remain invested in India.

Ninth, the digital push continues. Apart from incentivising digital and non-cash payments, a new Payments Regulatory Board under the RBI is to come into being. This trend, which emanated after DeMo, continues.

Tenth, no shocks, no bad ideas. Perhaps the biggest plus of this budget is that it brought no negative shocks. And no bad ideas like farm loan waivers. Hence the massive relief rally on Dalal Street. The bulls are happy they didn't get whipped.‎ And the economists are relieved that foolish ideas have been given the go-by.

The budget had a low adrenalin count, and that was a blessing. The only pity was its length.