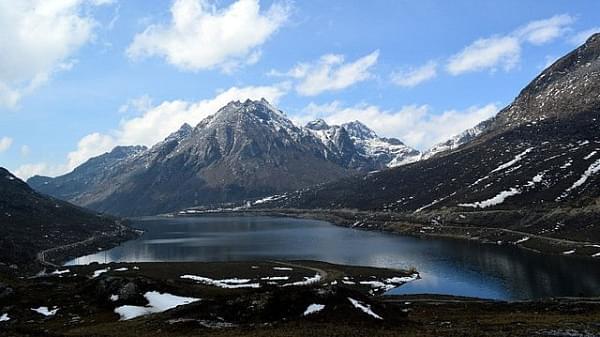 The Sela Pass in Arunachal Pradesh, where a new tunnel has been planned for. (Saurabhgupta8/Wikimedia Commons)

Obsessed with the perceived middle-class disappointment over Finance Minister Arun Jaitley’s failure to grant tax concessions, the media has ignored the large budgetary allocations for infrastructure projects in North East India that will boost connectivity to and within the region and, thus, unlock its economic potential. This budget is also not only about providing relief to farmers and healthcare to millions, but also accelerating the growth of the long-neglected and backward North East.

After partition of the country and arbitrary drawing of boundaries in 1947, the seven states of North East India and Sikkim became land-locked and lost access to markets and sea ports while vital trade links also got snapped. As a result, the region slipped into a steep economic decline that triggered strife and militancy. It was only much later that New Delhi realised that boosting connectivity to and within the region was the only way to bring about economic development there and, consequently, solve the problem of militancy plaguing the region.

Despite the formulation of the Look East Policy by prime minister Narasimha Rao in the early 1990s, it remained mostly on paper. The two United Progressive Alliance (UPA) regimes did little in real terms and it was only when Narendra Modi came to power in 2014 that the policy was reoriented and given a sharp focus as the ‘Act East Policy’. Since then, a flurry of mega infrastructure projects – roads, bridges, tunnels, railway lines, construction of new airports and heliports and expansion of existing ones – as well as hydro power, housing and other projects have been undertaken in the region.

In the budget presented on Thursday (1 February), Rs 1,292 crore has been set aside for ongoing power projects in the North East and capital outlay for the power sector has been increased to Rs 267.45 crore. This is in addition to the roughly Rs 54,000 crore that has been invested in various hydro-power projects in the region, especially in Sikkim and Arunachal Pradesh. Another Rs 234 crore has been allotted for developing solar power plants in the region over the past two years.

This budget also provides Rs 1,014.09 crore for construction of new and expansion of present and revival of defunct airports, heliports and advanced landing grounds and viability gap funding under the UDAN (Udey Desh ke Aam Nagrik) scheme. The allocation on this head in 2017-18 was Rs 200 crore. “Air connectivity to remote areas of the Northeast will boost tourism and result in greater flow of investments to the region, while also enhancing trade and commerce. By next year, most of these mega projects will start yielding results and we expect to see and experience a new North East very soon,” said Union Minister of State for Home Kiren Rijiju.

A total of 20 major railway projects involving the laying of 13 new rail lines, gauge conversions, laying double tracks and construction of other paraphernalia like new stations and expansion of existing ones have been sanctioned. Arunachal Pradesh will be a major beneficiary with three new rail lines being extended to the Indo-China border through steep mountainous and treacherous terrain. All the states will soon be connected with rail lines, something that could not even be imagined till 2014. The National Democratic Alliance (NDA) government has committed a whopping Rs 5,886 crore over the past four years for rail connectivity in the region and this figure is expected to rise to Rs 40,000 crore (including investments from Japan and by private players) by 2019.

The emphasis on connectivity by the present NDA government will result, by 2019, in about 10,500 km of new roads in the region having come up since 2014. According to Road Transport and Highways Minister Nitin Gadkari, the investment in construction of new roads, bridges and related paraphernalia and improving as well as expanding the existing ones in the North East would come to a staggering Rs 2 lakh crore from 2014 till 2019. This includes the Rs 40,000-crore, 1,300km-long Express Highway along the Brahmaputra and the Rs 55,000 crore trans-Arunachal Highway projects.

“Successive Congress governments, both in the Centre and in the North Eastern states, have paid zero attention to developing road, rail and air connectivity to and within the North East and to the economic development of the region. The present government at the Centre has ushered in unprecedented development and the fruits are already beginning to show. Within a few years, the economy of this region will take off, thanks to Modi’s vision,” Assam Chief Minister Sarbananda Sonowal told Swarajya.

But this is something that the mainstream media will not tell you about.