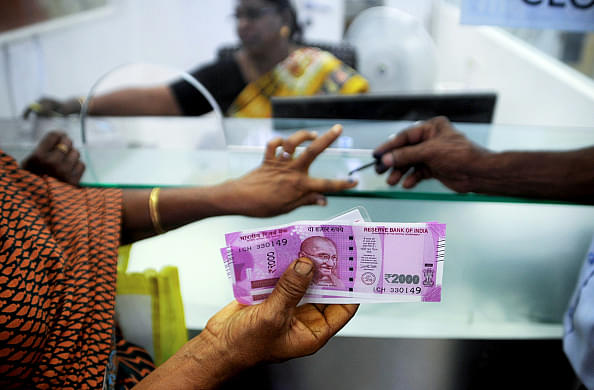 A woman displays her Rs 2,000 notes as she has her finger marked with indelible ink after exchanging withdrawn 500 and 1000 rupee banknotes at a bank in Chennai on 17 November 2016. Photo credit: ARUN SANKAR/AFP/GettyImages

As Indians get stuck with Rs 2,000 notes in the first phase of the replacement of the old Rs 500 and Rs 1,000 notes, the common complaint one hears against it is that it is of no practical use. No one can use it easily for daily payments; your sabziwallah can’t certainly give you any change back after you buy your alu and tamatar.

The uncharitable will say that the new note is meant to give crooks another way of storing black wealth.

However, the underlying logic of printing the Rs 2,000 note as a prelude to demonetisation is sound. It is a limited purpose note that is not meant to be in circulation forever.

The first purpose of the Rs 2,000 note is to quickly fill the void created by demonetisation. A Rs 2,000 note replaces four Rs 500 notes and two Rs 1,000 notes. The printing order for 3.5 billion pieces of Rs 2,000 notes (probably already completed or near completion) is meant to replace half the currency demonetised (Rs 14 lakh crore) in one shot. If money is the lifeblood of commerce, it is meant to replace the blood lost quickly. It is not meant to be hugely transacted on a daily basis.

However, it is still not too large a denomination to disable higher-value day-to-day transactions at petrol bunks, monthly provision purchases by the middle class, etc. It is meant to ease transactions for relatively higher spenders, which enables large parts of the urban economy to return to normal faster. Even the poor can use it like a credit card, making payments in advance to the same vendor that can be set off by daily purchases over a longer period of time.

The second purpose of the Rs 2,000 note is the ease with which it can be called back. It does not need to be demonetised when the government calls it back. In January 2014, the Reserve Bank of India asked people holding Rs 500 notes issued before 2005 to be returned for exchange with new notes. Whenever such notes returned to the banking system, they were withdrawn. They caused no dislocation.

This is what will happen to the Rs 2,000 note. Once it has served its medium term purpose, which is to infuse the economy with legitimate cash quickly, it will probably be withdrawn in stages. This can be done after 2018, when the currency situation is back to normal.

The third purpose of the Rs 2,000 note is preventive. The shock delivered by the demonetisation of 8 November means that the Rs 2,000 note will never be taken for granted by black money hoarders. They know they can be whacked in one fell swoop. The Rs 2,000 note is too big to be kept in large quantities given its vulnerability and lower usability on a daily basis.

It is a currency born to die, and anyone with common sense knows it. It is not meant for hoarding.