Post IT: Why It’s Time To Create New Growth Drivers 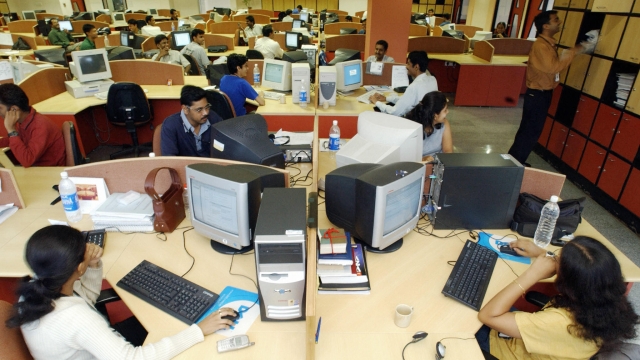 Software Professionals of Indian software firm Ivega Corp work at their workstations at the company’s office in Global Village in India’s technology hub on the outskirts of Bangalore 20 June 2003. (INDRANIL MUKHERJEE/AFP/Getty Images)

As the clamour for macro-economic intervention reaches a feverish pitch, Prime Minister Narendra Modi continues with many micro-economic initiatives that he hopes will aggregate to a big enough positive impact overall on the economy.

On the list are a number of initiatives in the railways, power, connectivity, roads, irrigation, digitisation, urban mass transportation etc. Several big and small measures like direct benefit transfer (DBT), demonetisation, goods and services tax (GST) etc have been either put in place or are underway to plug the leaks and wastage in the system and to mobilise resources for creating assets for common use and improving underlying efficiencies.

Incremental growth from these initiatives should begin to add up soon and together they may deliver a bigger impact than each, individually.

But, against the backdrop of a sharp fall in economic growth, in the first quarter of the year, measures like demonetisation and GST have come under severe criticism with calls for a stimulus for the economy to overcome what some see as a cyclical downturn.

A general stimulus may not be the best use of resources as observed by Sajjid Z Chinoy in his recent article. Besides exacerbating the underlying economic problems such as current account deficit (CAD) etc, it may end up achieving little by way of longer term gains.

While growth has reduced sharply in the last quarter, with demonetisation and GST as possible contributory factors, the problems of growth run deeper.

The economy today lacks a primary engine that can drive growth. For much of the last 20 plus years, IT services export acted as one of the primary drivers for growth. Generating lucrative primary and secondary jobs and driving up the demand for offices, housing, white goods, consumer goods, transportation, automobiles, travel, education, electronics, software and so on. Creating a huge multiplier effect and driving the overall growth of the economy.

There seems to be no such growth driver in play at the moment with IT services growth slowing down considerably as it enters a huge restructuring phase. Replicating the success of IT services into other service areas had limited success.

Two opportunities were lost during these years, the effect of which we are feeling now - one in building world-class infrastructure (productive assets for the economy) and two in creating global brands for products from India.

Though the demand for manufacturing goods picked up and jobs in the manufacturing sector were generated, mostly the market was taken up by foreign companies, effectively exporting many jobs to other countries. India’s famed consumption story failed to produce global brands and businesses that could create new engines for growth.

Much of the buoyancy in government revenues was wasted on growing government expenses (doling out social benefits through extremely leaky mechanisms) resulting in poor investments in infrastructure development required to break the constraints holding back the economy.

Secondary growth in the services industry was not easily transportable to the rest of the world (although it equipped people with skills that enabled them to relocate resulting in lost talent).

Merchandise exports stood at $274 billion against a targeted $900 billion by 2017 registering a slow average growth rate of around 4.7 per cent. The target of $350 billion by 2020 for the IT sector is now looking rather difficult to achieve, with its growth slowing down to around 5.3 per cent.

There are a number of microeconomic factors that keep our export uncompetitive like the cost of logistics, speed, low supply of skilled labour, shortage of irrigation etc.

Fixing the infrastructure deficiencies would remove some of the constraints to growth, improve general efficiencies and will soon start providing the incremental gains which could well add up to substantial gains in the short and medium term. Longer trend growth will, however, depend on building new competencies and capacities.

The Prime Minister and his team are therefore right in attempting to seed future growth through missions like, StandupIndia, StartupIndia, MakeInIndia, SkillIndia, Atal Innovation Labs, cleaning up and expanding capacities in education etc. Already much time has been lost and it will be a while before these seeds start having an impact on the economy. Remember, years of positive policies, pro-active support and numerous initiatives of governments at the centre, state and in cities created the IT boom. Including tax exemptions and preferred access to resources. Such a stimulus is required for establishing the foundations of a long-term growth trend.

New opportunities have appeared in the form of the world moving to greener options for transportation and energy, digitisation of the economy, robotics, greener lifestyles etc, and we cannot afford to miss them.

The government is also right in providing the context for this work by way of initiatives such as smart cities, bullet train, rural electrification, renewable energy missions, digital India, mass urban transportation projects, defence production and modernisation, expansion of the space programme and so on.

But, mechanisms need to be worked out on how to engage the private enterprise on a large scale in these missions, especially for the small and medium sized enterprises (SMEs) and start-ups. This is no easy work but critical to creating the flow of opportunities and resources towards building new capacities and capabilities in the economy, which can act as the source of future long-term growth. It requires an overhaul of the government procurement process with a bias towards sourcing from local SMEs and start-ups and one that emphasises quality and innovation over price and risk aversion. Maybe the model being pursued by the ISRO, which is currently working with more than 400 firms (including big private enterprises and a large number of small local firms) for components, material supplies and fabrication, can provide the template for the playbook for such a mechanism.

If the government can create a vibrant market for the private enterprise to participate in these initiatives, it will be providing one of the most critical elements for seeding the creation of huge future market opportunities for the Indian enterprise.

The added benefit could result in a faster movement towards a New India.