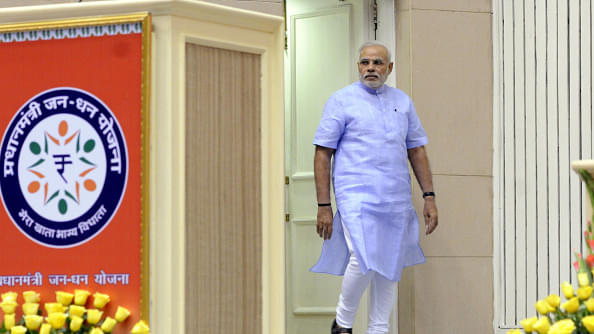 This month marks the completion of the third anniversary of the launch of the Pradhan Mantri Jan Dhan Yojana (PMJDY), the financial inclusion scheme implemented by the National Democratic Alliance (NDA) government. Along with the opening of a bank account, the PMJDY scheme comes with other benefits for account holders. The account holders get access to credit and pension facilities and also a debit card with a built-in accident insurance cover for Rs 1 lakh. More importantly, the account holders can get government subsidies delivered to them in cash, directly into their accounts.

According to the website of PMJDY, as of 16 August, there were 295.2 million beneficiaries or account holders, with a total bank balance in their accounts of Rs 658.45 billion (a little over $10 billion or Rs 65,845 crore). That is a little under half a per cent of the Indian gross domestic product (GDP) of around Rs 150 trillion. It is similar to the mobile phone connectivity that India achieved for its citizens in the first decade of the millennium.

An empirical study (Bank Accounts For The Unbanked: Evidence From A Big Bang Experiment, May 2017) has shown that PMJDY accounts are increasingly being used actively: “70 per cent of the accounts migrate out of dormancy into active use. Second, activity levels in PMJDY accounts increase over time, a pattern not necessarily seen in non-PMJDY accounts. These findings are especially stark given that non-PMJDY account holders in our sample appear to be much poorer and have transaction sizes that are one order of magnitude smaller. Finally, we find that the active accounts experience significant increases in cash balances. Government direct benefits transfer aids but does not fully explain usage. Overall, the data indicate that the unbanked learn by doing, and increase usage of accounts for transactions, liquidity management, and increasingly, balance accumulation.”

More good news is possible out of the successful financial inclusion initiative. Another paper (Who Wants To Be An Entrepreneur?, May 2016) suggests that, “financial development facilitates economic growth by moving workers out of less productive, informal entrepreneurial activity into formal jobs in more productive firms.” In other words, there are multiple benefits arising out of access to finance for the poor. If this were to happen, India could reasonably aspire to resemble the prosperous high-growth economies of the West.

But it would take time and much more remains to be done to get from here to there. The important and underlying requirement is that productive firms create formal jobs. Unfortunately, it is not happening. It requires fixing two issues. One is the issue of non-performing assets (NPA) in the banking system and the other is the absence of dynamism in the formal business sector.

That a scheme like PMJDY was required after five decades of public sector banking is testimony to the fact that the poorer sections of society were not able to access financial services adequately from the organised financial system. Therefore, if the government were keen to take credit for the successful implementation of the PMJDY, and correctly so, it must be prepared to take the blame for allowing NPAs in public sector banks to fester for three years. The logic that the NPA problem is a legacy of the previous government would be inconsistent, for financial non-inclusion too was a legacy of previous governments. –

No doubt the government has passed the bankruptcy legislation and empowered the central bank to direct the banks under its supervision to invoke its provision to recover their dues. But the big challenge that banks face is the share of bad assets in the overall loan portfolio, and it has shown no sign of peaking yet. Credit Suisse estimates that total stressed loans in Indian banking (recognised and unrecognised bad debts together) constituted 17.75 per cent of total bank loans as of March 2017. It was 16.9 per cent as of March 2016. The reason that the NPA problem has not peaked is the absence of economic dynamism in the country. Economic dynamism will remain elusive unless long-term capital investments are made by industry. Domestic capital formation remains elusive because there is too much uncertainty in the air.

Much as the government policies and legislation – the bankruptcy legislation, real estate sector regulation and regulation dealing with benami transactions – passed in the last two years are essential for the long-term growth of the economy, they induce uncertainty and paralysis in the short term. The judiciary has done its bit to make operating conditions unpredictable for businesses. The government has not mitigated these short-term costs. Worse, the (sometimes overzealous) pursuit of tax offenders and the failure to deliver on the promised corporate tax rate reduction have compounded the problem.

There is much to learn from successes, as there is to learn from failures. The PMJDY is a success story. It is a rare case of a popular policy that delivers political and long-term economic benefits. Hence, the government applied itself to the task. It needs to repeat the formula for economically pragmatic, in contrast to popular, decisions.

The previous NDA government fell on the sword of “India shining”. Achche Din might prove to be this government’s Damocles sword if it does not wake up to its failure to add to its rather meagre economic successes such as the PMJDY.