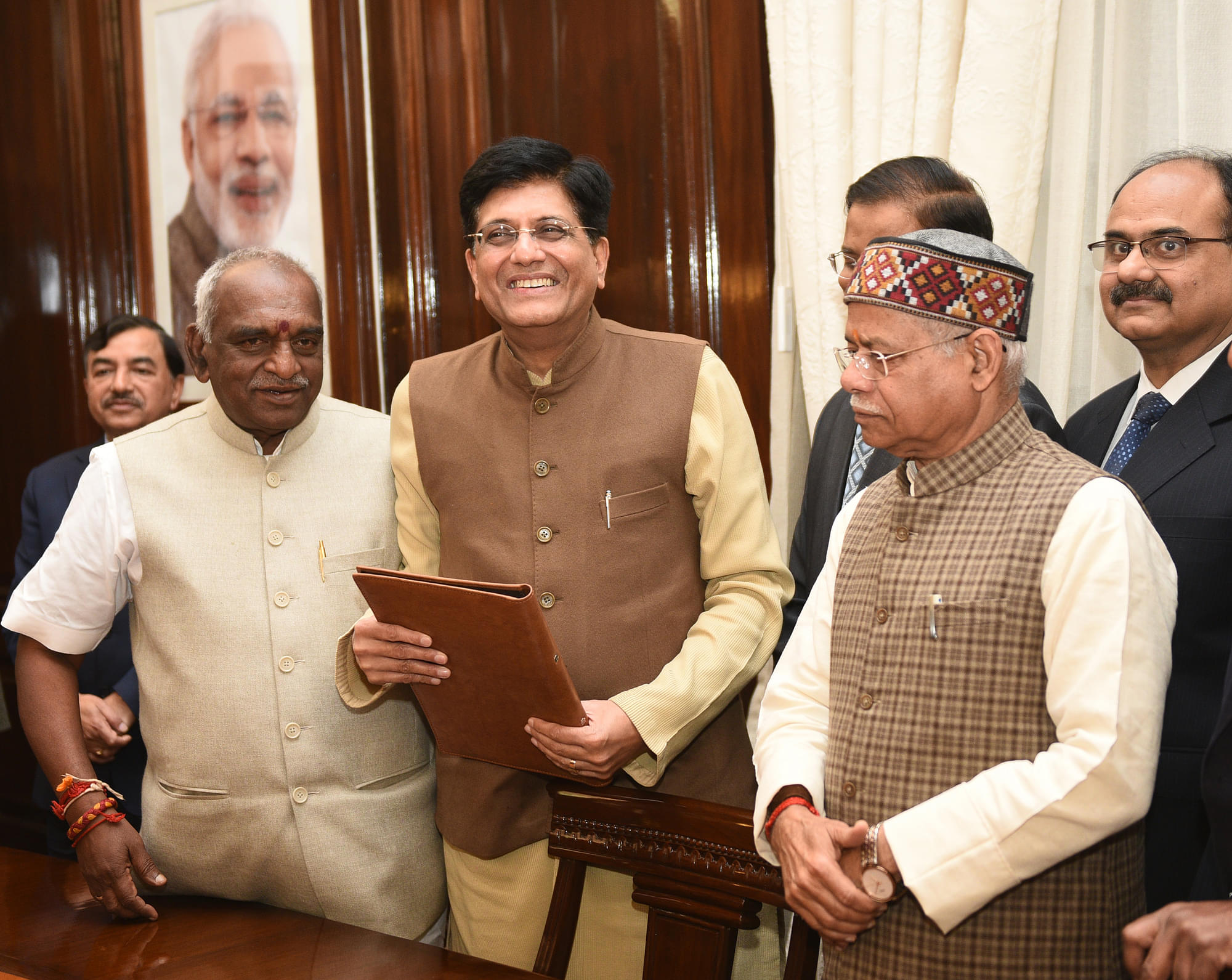 Interim Finance Minister Piyush Goyal along with his full Budget team as they give final touches to the Union Budget 2019-20 at North Block on 31 January 2019 in New Delhi, India. (Vipin Kumar/Hindustan Times)

Narendra Modi has hit the ball out of the park in the National Democratic Alliance’s sixth budget. Make no mistake, the budget presented by interim Finance Minister Piyush Goyal has been micro managed by the Prime Minister himself, and Goyal is only the happy messenger bearing the glad tidings. If there was any doubt, the Prime Minister himself dispelled it by banging his desk enthusiastically every time Goyal made an announcement. And with the budget coming well before the election code comes into force in March, this is clearly a full budget and not a vote on account or even an interim budget. It becomes an interim budget only if Modi loses the next elections - an outcome the budget is directly intended to prevent.

When Goyal got up to present his first budget, it was clear from the outset that it would be aimed at influencing the coming vote by first listing the government's achievements even while distributing largesse to segments that are unhappy with their lot. This includes small and marginal farmers, the unorganised sector and, most importantly, the voluble middle class.

The middle class, which has been the most pro-Modi segment among voters, got a thank you note for being a major contributor to the exchequer. Under the new budget, which no future government will be able to overturn, the tax exempt limit rises to Rs 5 lakh in the form of a rebate, which means the exemption is only for this year and the tax base remains intact. The tax rebate will not be available for those earning more than Rs 5 lakh. The standard deduction rises to Rs 50,000 from Rs 40,000. If you own a second house, there will be no tax on notional income from it. The gratuity limit rises to Rs 20 lakh, a kind of post-dated cheque.

The tax breaks mean the middle class gets nearly Rs 7.5 lakh of tax-free income, if one takes the deductions from taxable income into account. To the basic exemption, we must add the 80C deductions of Rs 1.5 lakh, Rs 50,000 as additional contribution to the national pension scheme plus the higher standard deduction. This excludes any contributions to medical insurance premia. The total tax-free income is thus pretty close to the Rs 8 lakh income limit for the new 10 per cent quota for the economically weaker sections legislated last year.

The game changer decision is obviously the Rs 6,000 annual structured income support scheme for small and marginal farmers (those with upto two hectares of land), which has been backdated to December 2018, and which will be paid in three instalments. Thus when the farmer goes to the polls, he would have got two instalments by April 2019. This explains Rahul Gandhi's premature strike in announcing income support for the poor last week. It implies that this budget provision was leaked prematurely. The Modi scheme, called the Pradhan Mantri Kisan Samman Nidhi, will benefit 12 crore farmers and cost Rs 75,000 crore, which will not bust the the fiscal math.

Workers in the unorganised sector get entry into a new pension scheme under which anyone who contributes Rs 100 per month will get a matching contribution of Rs 100 from government. Some 10 crore workers out of 42 crore workers may benefit from this if they choose to contribute. The calculation shows that if a worker enters the scheme at age 29, on retirement at age 60 he will get a monthly pension of Rs 3,000 per month. But the most important benefit of the scheme, called the Pradhan Mantri Shram Yogi Mandhan, is in terms of the documentation of workers in the unorganised sector, enabling closer monitoring of employment in this sector and better documentation of future  enterprise based jobs surveys.

The tax-free profits for companies building affordable homes continue for one more year till March 2020, which means projects started by them and completed much later will boost investment, jobs and growth.

Narendra Modi has managed to please all, and given the opposition glum faces, by delivering a budget that achieves the right mix of populism without messing the fiscal math. It's worth three cheers.