Time Is Ripe For Farm Reforms; It Will Help Industry Too 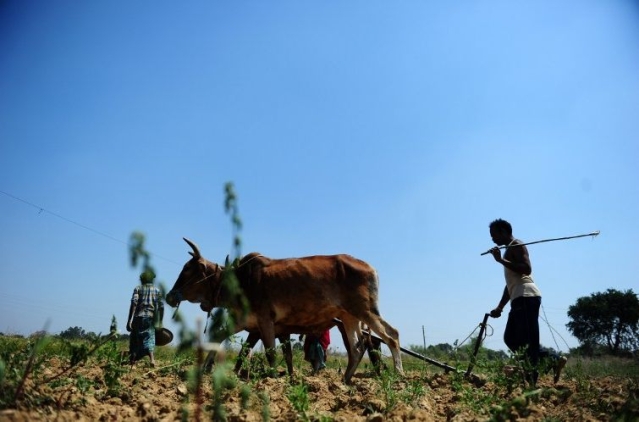 A farmer tilling his land.

Anyone who’s studied Indian agricultural economics over the last 50 years would have perhaps faced a similar set of questions.

Unfortunately, addressing the challenges faced by the sector is not half as challenging as it seems as we’re all well aware of the necessary answers.

Yet, some of these answers are yet to translate into a political narrative thereby uplifting our farmers from the burdensome legacy of excessive state control.

The biggest question has been with respect to shifting surplus labour from agriculture to industries.

We’ve looked at this question for decades and many five-year plans have often discussed potential solutions at length. Yet, we’ve not seen it happen because of the lack of manufacturing opportunities.

Key bottlenecks were the complex regulatory system, lack of power, unpredictable tariff policies, land and labour issues, high cost of capital and some of the highest taxation rates in India.

On the other hand, our extensive subsidy programme ensured that Indian agriculture remained a comfortable industry even if it was frequently pumped up with artificial steroids such as farm loan waivers.

With two successive droughts (2014 and 2015) combined with the low commodity prices internationally and structural reforms in India, the agricultural sector has faced its own set of challenges.

However, government interventions in the form of crop insurance, e-Nam and direct support in the form of PM-Kisan is likely to alleviate some of such pressures.

But, despite these interventions, there’s a need to reduce the dependency on agriculture as the prime source of employment.

This will have a big impact on improving our overall productivity and it will be instrumental in doubling farmers income.

Agricultural reforms, especially removal of the Agriculture Produce Marketing Committee Act, Essential Commodities Act and replacement of the Public Distribution System and Minimum Support Price regime with a basic income are essential components of what the agricultural sector needs in the medium to long-term.

Agricultural reforms are, perhaps, politically extremely difficult, yet, they will benefit the farmer in the short-run and clear the path for further efficiency gains over a longer period.

At some point, they will become inevitable and, therefore, they will happen, eventually, just as all reforms happen in India, eventually.

A bulk of these eventual reforms happened under Narendra Modi and there is a group of Chief Ministers that is looking at some of these issues, and so, one is optimistic that India’s reformer- in-chief may manage to deliver on them a lot sooner than one would have anticipated.

But, even with these reforms, for long-term revival of agriculture, we need adequate jobs in the secondary and tertiary sectors.

The key bottlenecks aren’t new, and several governments have explored them in the past and tried to find solutions to the best of their ability.

The United Progressive Alliance (UPA) government, before it went for its approach towards giving everyone a right to public utilities, started creation of Special Economic Zones (SEZs).

The idea was for these zones with certain benefits to act as a catalyst for India’s manufacturing revolution.

Lack of infrastructure, poor power generation and high-power tariffs were important aspects behind the limited success of the SEZs.

Post-2014, however, the government has improved India’s infrastructure, made India a power surplus country and has managed to reduce the cost of electricity.

The government also launched the Make in India mission, Start-Up India, and Stand-Up India programmes to create a modern, robust and innovation-driven economy that would convert job seekers into job providers.

The Make in India programme was partly a success in sectors such as smartphone manufacturing where India managed to scale up from less than two units to over 120 units in five years.

Modi 2.0, however, has made further progress as India now has one of the most competitive corporate tax rates in the world.

At the same time, Goods and Services Tax (GST) is becoming more predictable and it is becoming more stable, which should give government the necessary room to move towards a simple three-slab GST system, say 5, 15 and perhaps 28.

Some work needs to be done on reducing the high cost of capital and putting in place a more predictable tariff policy.

In an earlier joint article with Sanya Sharma, we had showed how Free Trade Agreements (FTA) do benefit India’s exports, imports and overall growth and, therefore, we should be more open to free-trade agreements and lowering tariff rates on essential inputs for our manufacturing sector.

With a major thrust on ease of doing business and frequent embracing of India’s wealth creators, it is evident that this government is looking to unshackle the animal spirits of the Indian economy.

Some of the key bottlenecks to India’s manufacturing revolution have been cleared by the government and it should now proceed to addressing the rest.

The biggest beneficiaries of a manufacturing revolution would be farm labourers, who would find adequate non-farm job opportunities.

This will improve their productivity, thereby increasing their wages and unleashing a productivity surge-led growth for India over the next decade.