PM Modi Interview 1: Despite UPA’s ‘Landmines’, Chidambaram’s Budget Jugglery In 2014 Was Not Called Out 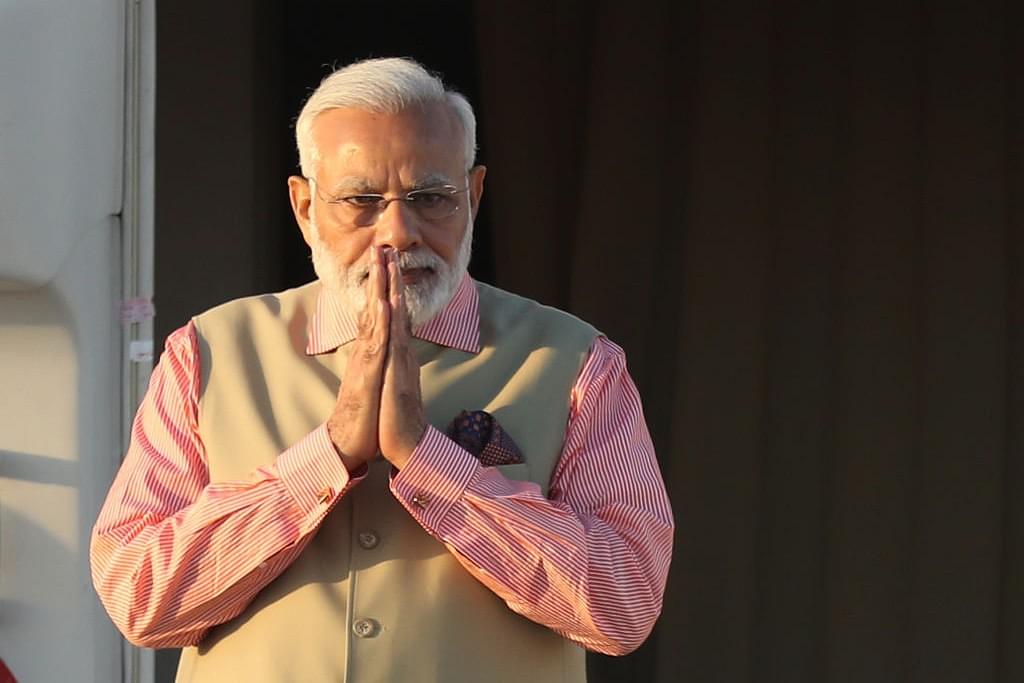 In a free-and-frank interview to Swarajya on 30 June, Prime Minister Narendra Modi talked about the challenges faced by the National Democratic Alliance (NDA) government when it took over from the United Progressive Alliance (UPA) in 2014, its approach to economic reforms, especially the privatisation of public sector units (PSUs), the efforts to put Indian banking back on the rails, the political challenges from a Mahagathbandhan against the NDA in 2019, the NDA’s own allies problem, the Kashmir crisis, the alleged concentration of power in the Prime Minister’s Office (PMO) and the Bharatiya Janata Party’s (BJP’s) talent deficit, and many other topics.

In the interview, Modi makes the following points:

One, the economy was in much worse shape than he had imagined, and some of the budget’s numbers were “suspicious”. Put simply, he implied that the budget numbers left behind by former finance minister P Chidambaram were not a correct statement of the finances of the government. But Modi decided that he would not play politics with these numbers, since the country could not afford to “multiply the distress”.

Two, on the lack of jobs, he said that “more than a lack of jobs, the issue is a lack of data on jobs”. This is what needs fixing first. Moreover, with data from the Employees Provident Fund Organisation showing a rise in formal sector jobs, informal sector jobs too would have risen, as would jobs created by Mudra loans. He added: “our traditional matrix of measuring jobs is simply not good enough to measure new jobs in the new economy of New India.”

Three, the farm distress issue, and the promise of doubling farmers’ income are being addressed in a four-fold strategy, which involve cutting inputs costs, raising prices of produce, ensuring minimum harvest and post-harvest losses, and creating more avenues for income generation. “If you focus closely on our policy interventions, they are aimed at helping farmers at every step – beej se bazaar tak,” he told Swarajya.

Four, the government’s internal security strategy is showing result in the Maoist-affected areas, but in Kashmir, now that Governor’s Rule has been imposed, the focus will be on “good governance, development, and accountability”, with the government-appointed interlocutor, former Intelligence Bureau chief, Dineshwar Sharma providing the necessary feedback on the way forward for peace in the Kashmir Valley.

The following is the first segment of the full text of the interview given to Swarajya’s Editorial Director R Jagannathan, CEO Prasanna Viswanathan, and Publisher Amar Govindarajan. A part of the interview, relating to Modi’s views on the goods and services tax (GST), was published on 1 July as it coincided with the first anniversary of the biggest tax reform in Indian history.

Swarajya: In 2014, we thought that the Modi government would bring out a White Paper on the state of the Indian economy. However, nothing of that sort happened. Why didn’t you do it?

Narendra Modi: You are absolutely correct when you say that it was the opinion of various experts and political pundits that a White Paper should be published on the economic situation in the country.

In 2014, one of the key agendas of the BJP’s election campaign was highlighting the dismal management of the Indian economy, ironically under an ‘economist’ prime minister and a ‘know-it-all’ finance minister.

We all knew that the economy was in the doldrums but since we were not in government, we naturally did not have the complete details of the state of the economy. But, what we saw when we formed the government left us shocked!

The state of the economy was much worse than expected. Things were terrible. Even the budget figures were suspicious.

Swarajya: Why didn’t you highlight these suspicious bits?

Modi: When all of this came to light, we had two options – to be driven by Rajneeti (political considerations) or be guided by Rashtraneeti (putting the interests of India First).

As you would remember, I had clearly said during the campaign ‘Saugandha Mujhe Is Mitti Ki, Main Desh Nahi Jhookne Dunga’. Our government has lived this promise.

Rajneeti, or playing politics on the state of the economy in 2014, would have been extremely simple as well as politically advantageous for us. We had just won a historic election, so obviously the frenzy was at a different level. The Congress party and their allies were in big trouble. Even for the media, it would have made news for months on end.

On the other hand, there was Rashtraneeti, where more than politics and one-upmanship, reform was needed.

Needless to say, we preferred to think of ‘India First’ instead of putting politics first. We did not want to push the issues under the carpet, but we were more interested in addressing the issue. We focused on reforming, strengthening and transforming the Indian economy.

Swarajya: Would disclosure have made things worse?

Modi: The details about the decay in the Indian economy were unbelievable. It had the potential to cause a crisis all over.

In 2014, industry was leaving India. India was in the Fragile Five. Experts believed that the ‘I’ in BRICS would collapse. Public sentiment was that of disappointment and pessimism.

Now, in the midst of this, imagine a White Paper coming out giving intricate details of the extent of damage. Instead of being a mollifier, it would be a multiplier of the distress.

There were several landmines laid in various sectors. We accepted this uncomfortable truth and hit the ground running from the very first day to stabilise things so that the Indian economy can be strengthened for the long haul.

We tolerated a number of political allegations, we accepted political damage but ensured no damage to our country.

The positive results of our approach are for everyone to see. Today, India is the fastest growing large economy of the world with strong fundamentals to propel further growth. Foreign investment is at an all-time high, GST has revolutionised the tax regime, India is an easier place to do business than ever before and, most importantly, we are seeing unprecedented levels of trust and optimism.

(Click here for the second part of the interview: Modi On Jobs: “If States Claim To Be Creating Lakhs Of Jobs, Can Centre Be Creating Joblessness?”)