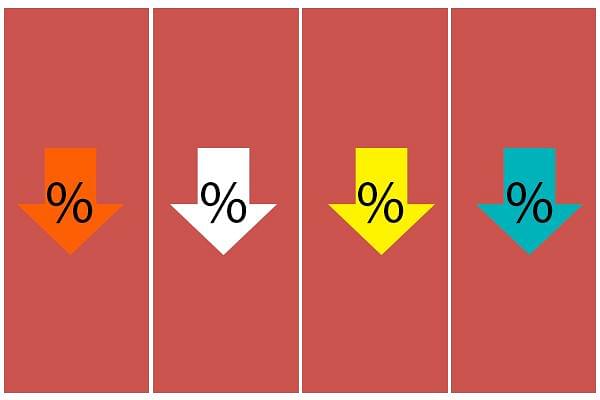 Reserve Bank of India has cut interest rates for four consecutive times in a break from the norm.

The 35 basis points cut announced by the Reserve Bank of India (RBI) yesterday was the fourth in succession. Why were four consecutive rate slashes needed?

To answer, a background to contemporary macroeconomic conditions is in order.

The RBI has estimated the gross domestic product (GDP) growth to come down from 7 per cent to 6.9 per cent in its bi-monthly monetary policy statement released on 7 August.

A downward revision in growth forecast was not unexpected but the overall economic outlook released by RBI is more worrying.

Monsoon is lower than average, at least until 6 August and total area sown under kharif crops is 6.6 per cent lower as compared to previous year (based on data until 2 August).

If agriculture sector doesn’t perform well in this financial year then it will further impact the rural demand, which is already declining.

Growth rate of rural wage has consistently declined since 2013-14, except for 2016-17 where it increased marginally. A declining farm income coupled with declining rural wage will further aggravate the demand situation.

Issues in non-banking finance companies (NBFC) sector started in September 2018 with the collapse of IL&FS, and now the entire sector is facing unprecedented crisis. Reduced lending activity by NBFCs has impacted the demand in consumer durables and fast moving consumer goods (FMCG) sector.

Now the central bank has also accepted that growth in FMCG sector has slumped both in value and volume terms in last four quarters. Decline in auto sales is also partly attributable to poor financial health of NBFCs.

Though the RBI and government both are taking steps to support NBFCs at a macro level but entity specific issues can’t be addressed by the regulator.

The government vision of creating a $5 trillion economy is largely dependent on revival of private investment, increased domestic demand and increase in exports. The RBI has reduced the repo rate by 110 basis points since February 2019 but private investment would still not pick up.

There are two factors which are primarily responsible for this cold response from corporate sector.

Firstly, though the macroeconomic indicators are looking not so bad, the overall sentiment about the economy is not good. The numbers appear to be fine for analysis purpose but never ending tax litigations, decline in growth in all major economies, trade protectionism etc, are creating a negative sentiment.

Secondly, despite of rate cut by RBI, banks have not transmitted the benefit to the borrowers. As a result, decline in interest rates are not commensurate with the rate reduction by RBI.

And hence, the fourth successive cut was inevitable. However. . .

During this year from February to June, RBI reduced repo rate by 75 basis points and only 29 basis points has been passed on by the banks. Non-performing assets or NPA-hit banks may be wanting to increase their net interest margin by not reducing the lending rates.

Though there is slight improvement in services PMI but comparison of data over a short period will not provide any meaningful conclusion. The same applies to decline in exports in the month of June.

From the exports point of view, it must be noted that Chinese yuan has depreciated significantly, and it will be a challenge for Indian exporters in the markets where they compete with Chinese.

Where we stand today

RBI broke the convention with four successive rate cuts but desired outcome will be achieved only when the rate reduction is transmitted by banks. Change in economic outlook will naturally take a little time because acceleration in investment cycle will get reflected at macroeconomic level with a time lag of at least three to four quarters.

On the fiscal front, government has to be more proactive to the reasonable demands of the industry.