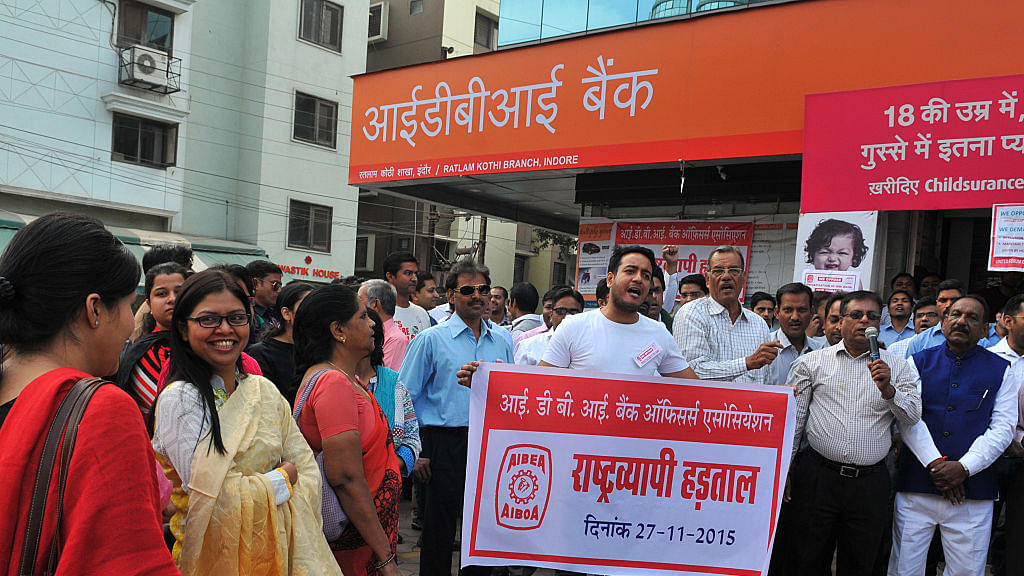 IDBI Bank employees protesting during their one-day strike against privatisation of banking sector in Indore. (Shankar Mourya/Hindustan Times via GettyImages)

With more than 40 borrowers from public sector banks (PSBs) being earmarked for bankruptcy or already sent to the National Company Law Tribunal for a resolution, it is more than obvious that the government will have to recapitalise many of its banks if they are to revive lending. Bad loans with public sector banks are already well in excess of Rs 8 lakh crore, and the inside opinion is that it could be much higher.

Last night, in a TV discussion on ET Now, most panelists seemed reluctant to suggest large-scale recapitalisation of public sector banks, and with good reason. Caution is certainly warranted since one cannot throw more good money after bad, especially in the case of banks that simply can’t be rescued. It was also felt that many banks had headroom to raise capital from the markets, as government holdings were still well above 51 per cent.

But, to start on a blank slate, let’s begin with the assumption that all options are open to the government. This may not be the case, but once we look at all of them, we will know which ones are most viable, not only economically, but from a politically sensitive point of view.

The first, and best, option is obviously privatisation of all but a handful of strong public sector banks. But this option will be available only if the banking nationalisation acts of the sixties and eighties are amended or repealed. There is little chance of that happening, since the government does not have a majority in the Rajya Sabha, and denationalisation, leave alone privatisation, is political dynamite. Not only will politicians oppose it, but even the unions will not be easy to defang.

There is, however, one bank – IDBI Bank, which was not a nationalised bank – where government holdings can come down below 51 per cent. IDBI Bank was set up under the Companies Act. The government had a twinkle in its eye last year about bringing its holdings below 50 per cent, by first offloading stakes to institutional buyers, and then allowing it to be privatised by stealth.

But that twinkle has been replaced with a shifty look now. Reason: IDBI Bank is in a mess financially. Its gross bad loans are at 24 per cent of advances, and this adds up to over Rs 50,000 crore. The government holds 74 per cent of the equity, and insurance companies another 15 per cent. Which means nearly 90 per cent of the bank is in state hands.

With a market capitalisation of Rs 13,500 crore, it is possible to privatise it in two stages, first by offloading some 25 per cent to institutional buyers, and then the rest.

This is the only bank that can be privatised, but doing so is politically troublesome, since it will have to be sold at a throwaway price. You can imagine the political shouting matches that will result before election season.

Conclusion one: Privatisation is not an option before the next government is formed, though partial sale of IDBI shares is possible to bring in new capital. But this capital will come only if there is a covert assurance that government will ultimately get out of the bank. Not easy to put down in black and white before an election.

The second option is to shrink the less viable public sector banks. They can be converted to “narrow” banks, where they will not be allowed to lend to big borrowers, or expand staff or branches. They can be asked to reduce branches and staff through natural attrition or voluntary retirement schemes. Their focus must be the recovery of as many bad loans as possible, till they reach a point where they begin to look viable. The only cost for government here would be to support their voluntary retirement packages through the offer of interest-free loans, or other forms of support. Some of the narrow banks may fail, and others may succeed, and the latter can be allowed to grow again by raising private capital, presumably after (and if) the nationalisation acts have been repealed. This is a low-cost, low-risk option.

The third option is a variant of the second. Here, the government, without offering fresh capital, offers a guarantee on all deposits, so that there is no run on the bank. Deposits can be shifted to stronger banks too, in an organised manner. The bank can be asked to sell all its good assets to stronger banks, and use the proceed to finance the resolution of bad loans. Once the bad loans are resolved, the final costs can be added up, including the cost of paying off the remaining employees, and the bank can be wound up.

The fourth option is merger with stronger public sector banks, but this should be done only on the basis of geographical and business complementarity, and not randomly with a view to saving on recapitalisation funding. Selling assets and liabilities is still a better option than trying to merge the whole bank, but politically this may seem preferable. No merger should be done without the explicit consent of autonomous bank boards.

The fifth option is private recapitalisation, while retaining government ownership. This will mean issuing non-voting shares to investors by offering them higher dividends, while government can retain 51 per cent voting rights. This “golden share” would carry less dividend, but higher voting rights. This too would require legislation, but may be more politically acceptable than privatisation.

The sixth option is selective – but high levels of – recapitalisation. This is the second-best option after privatisation, which anyway is not happening anytime soon. If the strongest 10-12 banks are recapitalised substantially and they are then given the option of expanding through options two, three and four above, we will have a stronger public sector banking system.

This recapitalisation would not be a waste, for the government will expand its stake in the short term by issuing shares at current low prices, and sell them again after two years, when the bad loans problem is behind us, and bank shares start rising sharply again, both because their books are cleaner and because credit is beginning to grow.

Taken together, option six is the most viable one, or the least bad option for now.

There could be other banks, including the idea of creating bad banks, but if they have not been found feasible so far, there is no point trying to invest in a new idea that no one is comfortable with anyway.

It is worth recalling that after Lehman, which happened this month in 2008, the US government and the Fed acted fast to prevent the credit markets from freezing, both by cutting rates to near zero and by investing directly in some financial institutions, including Citibank. Citibank was temporarily nationalised before the shares were sold off again once the bank stabilised.

In India too, if banks are not capitalised quickly, credit will taper off. In the current financial year to mid-August, bank credit shrank by 1.8 per cent. But for retail loan growth, the figure would have been worse. But no economic revival is possible only based on retail lending. Corporate investment must pick up, and that can’t happen if banks are under water for lack of capital.

This is India’s Lehman month. We have the option of doing nothing and letting bank credit dry up faster as more bad loans get sent to bankruptcy courts. Or we can recapitalise the strongest 10-15 public sector banks and then force the rest to shrink and take their chances with a slow revival.