With Passenger Traffic Falling Consecutively For Past 2 years, Prabhu Would Rely on EBR 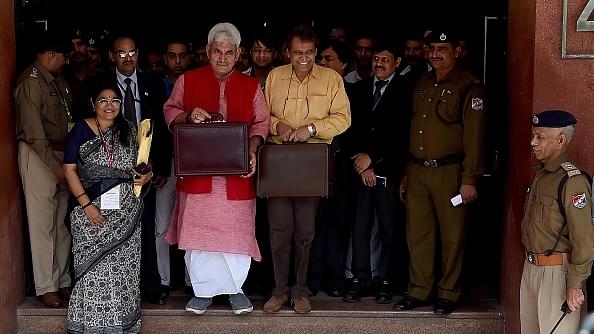 Prabhu and Manoj Sinha in 2015 budget

What Suresh Prabhu delivered last February was extra-ordinary. No new trains, a moderate hike in freight rates and a credible plan for raising resources and investment in proper areas.

So let’s look at what has been achieved in the past year. It is a distinction for Prabhu. For Dedicated Freight Corridors (DFC’s) over 80% land acquisition is done, train punctuality is now 82%, operating expenses is up by just 1.5%, doubling of 620 km, laying down 448 km of new lines, a multi-billion-dollar contract to manufacture top quality wagons, on the ground testimonies certify better cleanliness, and the feedback mechanism has increased accountability.

Finally, a concept note released in Jan 2016 talks about an empowered Rail Development Authority as suggested by Debroy committee for setting standards, tariffs and ensuring fair competition with private players.

Prabhu’s junior minister Manoj Sinha in this exclusive interview with Swarajya spoke about some of these achievements. But that’s not all, a lot of problems are coming to slow down the ministry–

1. The implementation of the recommendations of the 7th pay commission require an additional Rs 32,000 crores. The finance ministry has simply refused to share this burden.

2. Total rail revenues have fallen short of expectation– they have grown by 5.8% only, instead of the budgeted 15.3%.

3. The volume of passenger traffic is falling for the past two years – a source of worry.

4. In the freight segment the railways are facing tough competition from roads and Prabhu has still not been able to devise a realistic strategy for increasing the railway’s share in the freight business. Remember, more than two-thirds of rail revenue today comes from freight.

Given this state of finances, what will Prabhu do tomorrow? Biting the bullet on passenger fares, project un-realistic revenue numbers or do what Rail Bhawan people have been doing, raise the freight rates - three possible scenario.

If Prabhu somehow manages to effect a 10% hike across both the passenger and freight segments, he will be able to garner an additional 17,000 crores only - a report from Axis Capital says. Various estimates suggest that in the passenger segment railways have under-recoveries of 30,000 crores. In an economic sense too, a passenger fare hike is going to push an even greater number of travellers to lower cost air-lines. Railway seats going empty on long distance AC tickets is just not wild imagination any more. It is already happening on some routes like Delhi-Bangalore.

The other scenario is of projecting un realistic numbers. This might just destroy the credibility that Prabhu, the reformer, had garnered when he reformed the Electricity sector in 2003. Credibility, today, is very important for inviting foreign investors in.

The third scenario, steep freight hike would further push away freight traffic away from the railways towards roads. Already, more than 50% of the freight transport is done via roads while it is common knowledge that rail roads are the most efficient mode of goods transfer.

So, the only option remaining is External Budgetary Resources(EBR) or Institutional financing. This includes joint ventures by IRFC (Indian Railway Finance Corporation), setting up a fund or by raising resources from multilateral pension funds and other agencies. But then again, managing the 8.5 lakh crore investment promise that Prabhu made last time will still be tricky business.

Not to forget the pension bill. Currently 51% of the total revenues of railways actually go towards paying the wages and pension. As the Axis report notes, with more than 14 lakh pensioners and some bulk retirement happening in the next two years, Prabhu is staring at a steeper wage bill hike then what the revenues can possibly accommodate.

Another thing demanded by the middle class: clean stations. Previous rail ministers have promised all sorts of mechanism for clean stations. Prabhu is planning to have 400 “green” stations with LED lights, conversion of waste to energy, generation of solar energy, recycling of water etc.

Then is the issue which often makes news due to the human dimension. Bringing the safety level of the Indian railways upto international standards still remains a pipe-dream. In 2010, the Anil Kakodkar committee on railway safety had suggested investment of Rs 1 lakh crore. Till then Prabhu will have to pray to the Almighty for our safety.