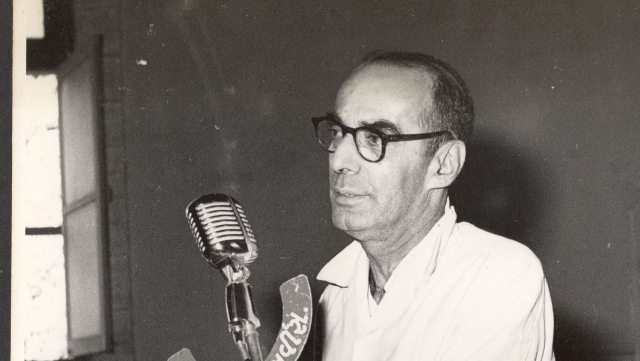 The Swatantra Party first entered my life as a dimly understood rival for my mother’s attention.  I would have been around 11 at the time, and my father Minoo had given up his comfortable job at Tatas as JRD Tata’s Chief of Staff to launch independent India’s first serious parliamentary opposition to Nehru’s one-party state.  Though sympathetic to Swatantra’s free market ideology, JRD had been persuaded that Father’s continuance at Tatas as an opposition leader would bring down the ire of the Nehru government on the whole Tata group.

So Father set up on his own as a management consultant and hit the campaign trail as General Secretary of the new party in the run up to the 1962 general election.  Mother increasingly had to accompany him, playing the role of loyal politician’s wife and adding her personal glamour and impeccably Hindu credentials to his agnostic Parsi origins.  The Jan Sangh, precursor of today’s BJP, had been trying to discredit father as “a beef-eating Parsi.”

Minoo Masani electioneering in Rajkot.  The Jan Sangh had accused him of being a beef-eating Parsi

For me, still ignorant of such political machinations, the Swatantra Party meant long and painful separations from an indulgent mother I adored, living in her absence with my very disciplinarian Parsi grandparents.  Why, I asked Father, couldn’t he take the far easier route of joining Nehru’s Cabinet instead?  After all, they had been good friends, working closely together during the nationalist movement.  Father’s reply was characteristically terse: “Because that would stop me doing the things I believe in, and the PM would feel much the same.”  Father by then had already been active, along with Jayaprakash Narayan and C. Rajagopalachari (Rajaji), in championing lost causes such as Tibetan independence, so abjectly surrendered to Red China by Nehru, and self-determination for Kashmir.

Although Rajaji accepted no official position in the Swatantra leadership, he was its presiding deity, lending it the credibility of his august past as a leading Congressman and independent India’s first Governor-General.  “The old fox”, my parents affectionately called him, partly because of his inscrutable smile and dark glasses, but also his reputation for Machiavellian political strategies.  Like Mahatma Gandhi with Congress in the past, Rajaji sanctified Swatantra gatherings with his presence and often had the last word behind the scenes.  His entourage included the great singer, Subbulakshmi, dubbed “the nightingale of India”, whose husband, Sadasivam, was Rajaji’s devoted assistant and secretary.  Despite her roots in Carnatic music, Subbulakshmi excelled at the Meera bhajans of northern India; and her inspiring performances of these frequently opened and closed party conferences.

Masani (left) at an election meeting in his Rajkot constituency with C Rajagopalachari (Rajaji) centre, and Acharya JB Kripalani (right)

The third and least impressive member of Swatantra’s leading triumvirate was Professor N G Ranga, a kisan leader from Andhra Pradesh, whose professorial title belied his bumbling presence and incoherent speeches.  I often asked how and why he had been elected party president, to be told that his peasant credentials were necessary to balance the party’s strongly urban image.

By the time, I became a college student (at Elphinstone in Bombay), Father’s remarkable organising abilities and his oratory had made Swatantra the main opposition in Parliament, with Father at its helm hammering away at a Prime Minister whose failing health mirrored his humiliation in the disastrous 1962 war with China.  In the 1967 general election, Swatantra did even better, crossing the necessary threshold to become India’s first official Opposition.  Father became Leader of the Opposition, with Cabinet status and a Lutyens house to match in New Delhi’s coveted Tughlaq Road.

My own politics through these exciting times were steeped in Swatantra ideology.  I was dazzled by the glamour of the legendary beauty, Maharani Ayesha of Jaipur, who led the cohort of Indian princes that gave Swatantra its rural base, joining forces with the party’s urban businessmen and intellectuals.  I remember Father grumbling about the Maharani’s penchant for disappearing to Europe unexpectedly with her polo-playing husband, just when she was most needed in Rajasthan for local electioneering.  The Jaipurs, as close friends of the Queen and Prince Philip, led a jet-set lifestyle which made them easy targets for socialist jibes.  Father had far more admiration for the grit and perseverance of the Gwalior Rajmata, although she gravitated eventually into the Hindu nationalist Jan Sangh.

Masani’s wife Shakuntala (extreme right) on a Swatantra Party platform.  To her right is one of the new party’s stars, Ayesha of Jaipur (Maharani Gayatri Devi)

Perhaps the most appealing characteristic of the Swatantra Party was its uncompromising secularism and championship of minorities.  Father, in particular, much admired Pakistan’s President Ayub Khan, who had backed India during the China war, and he blamed Indian intransigence on Kashmir for the hostilities which escalated into the second Indo-Pakistan War of 1965.  I remember being dubbed a traitor by chauvinistic fellow students at Elphinstone when I argued Pakistan’s case on Kashmir in the prevailing climate of jingoism.

The Swatantra Party strongly challenged the economic orthodoxies of Nehruvian socialism, and Father led the assault every year with his budget speech in Parliament, opening the debate as Leader of the Opposition.  It was a challenging performance, since the budget details were never known in advance, but Father always rose to the occasion with his usual oratory and a forensic skill in dissecting opaque official statistics.  His budget speeches usually filled both the press and public galleries, were heard with rapt attention and were widely reported in the papers, though not on government-controlled broadcast media.

Father was also the party’s main link with events and movements abroad during these tense years of the Cold War.  Like Nehru, he was a firm internationalist, but the similarity ended there.  Unlike Nehru, Father, then still a socialist, had been appalled by Stalin’s purges of the 1930s, followed by the iron curtain imposed on Eastern Europe at the end of World War 2.  He saw communism as an expansionist ideology, which would attempt to sweep across India as it had China.  Global communism was for him the greatest threat to world peace, and he strongly supported the military alliances the West was sponsoring to halt the Communist advance.  Not surprisingly, he saw Nehru’s non-alignment developing, under the baleful influence of the Communist “fellow-traveller” Krishna Menon, into a thinly veiled apologia for Communist tyranny.  His warnings were vindicated by the attempts of India’s supposedly non-aligned government to condone Soviet suppression of both the Hungarian uprising of 1956 and the Prague Spring of 1967.

Masani at an election meeting, 1960s.  He was a formidable public speaker

Ironically, it was my years as a student at Oxford in the late 1960s, at the height of the anti-Vietnam War protests, that ended my Swatantra honeymoon.  After two years of staunchly arguing the American case, I finally succumbed to the anti-war zeitgeist.  Father and I now had frequent rows about what I saw as his toadying to American imperialism, and I converted Mother to my own subversive views.

Tensions at home escalated in 1969 when Indira Gandhi split the Congress and launched her bid for supreme power on a populist platform of nationalising banks and abolishing princely privileges.  Father, now President of the Swatantra Party, resolutely opposed Indira and expelled C C Desai, a colleague who had been bought over by her to foment disaffection in opposition ranks.  It won Father the reputation of being one of the last incorruptibles among Indian politicians.  I remember a Times of India cartoon by the great R K Lakshman showing Father tall and upright in a sombre, black Nehru jacket showing the door to a scruffy, little C C Desai, dressed in a tea-shirt, jeans and sneakers and complaining: “But nobody dresses like that any more!”

Indira had already carried the battle into our own home, where Mother and I split with Father to campaign for the leftwing Indira Congress in the 1971 general election.  Father, under pressure from Rajaji,  had by then been compelled to submerge the distinctive Swatantra identity into a so-called “Grand Alliance” with the discredited right-wing of Congress.  The result was a landslide for Indira, in which Father, for the first and last time in his career, lost his own parliamentary seat.  He insisted on taking responsibility for his party’s defeat and resigned as its president.  A few years later, the party was finally wound up.  Father devoted the rest of his long life to civil society groups promoting citizenship and free enterprise.

A political wife: Shakuntala Masani being welcomed at an election meeting in Rajkot

Forty years on, the political wheel has turned full circle, with a government ostensibly committed to economic liberalisation.

My own politics have also returned to the pro-Western economic liberalism of my early youth.  But like other secularist economic liberals I now find myself politically homeless, unwilling to choose between a dynastic Congress rump and the saffron chauvinism of Narendra Modi’s RSS cadres.  The sad demise of the Swatantra alternative left a political vacuum that has yet to be filled; not just my own nostalgia but the lament of leftwing Nobel laureate Amartya Sen in his speech to this year’s Jaipur Literary Festival.