Why Radical Left AAP Should Worry Us 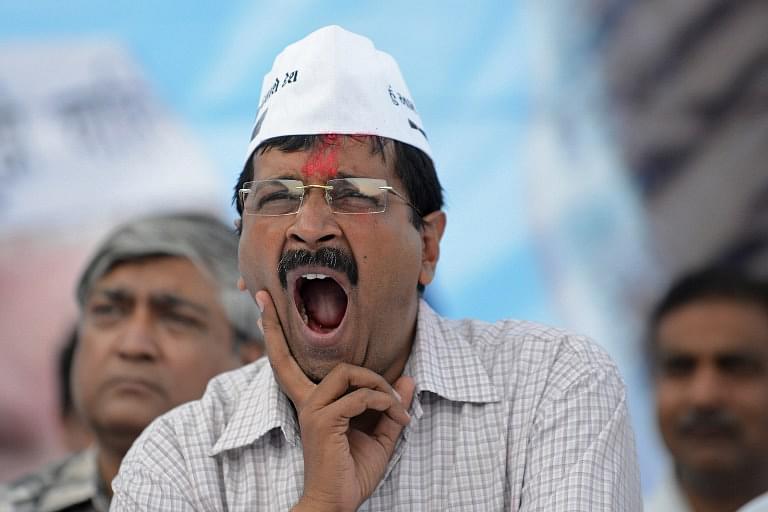 The consequences of handing the Aam Aadmi Party a majority are likely to be nothing short of disastrous.

On January 20, 2014, about midway through a tumultuous 49 day reign, then chief minister of Delhi, Arvind Kejriwal, leader of the Aam Aadmi Party (AAP), declared publicly, “Yes, I am an anarchist.” This was in the context of a protest by Kejriwal and his ministers against the central government while they themselves ran the state government at that time!

It was indeed a state of near anarchy.  On February 7, 2015, voters in Delhi will decide if they want five more years of anarchy.

Some news reports and polls, which admittedly may have their own agenda, such as to check the continued rise of the Bharatiya Janata Party (BJP), suggest that the AAP is poised to do well, perhaps even win outright.

It is therefore more important than ever to scrutinise exactly what this party stands for. At least the first time around their minority position and short time in office didn’t allow them to do too much damage but all bets are off if they emerge with a clear majority and are able to put into practice what they actually believe.

Let’s not mince words: Kejriwal and the other senior leaders of AAP come from an assortment of far left, radical socialist, social activist, Marxist, Communist, Maoist sympathiser, and other such backgrounds. These are individuals who cannot sensibly be called even centre left, as they’re very far on the left.

Kejriwal himself, at that time calling himself a “social activist”, signed an October 2009 letter by a leftist collective, Sanhati, condemning the Indian government’s proposed military offensive known as Operation Green Hunt against Maoist insurgents committed to the destruction of the Indian republic. The letter’s principal author was writer and activist Arundhati Roy. Other signatories included well-known Indian and international radical leftists including the AAP’s Prashant Bhushan and American academic Noam Chomsky among many others. It’s not surprising therefore when the AAP was in power in Delhi a year ago, Bhushan reportedly wanted to bring Maoists within the fold of the AAP. And elsewhere he’s expressed his support for socialist economic policy.

But to really understand a political movement or party, one has to come to grips with its core ideology. In the case of AAP, the place to look is in the writings of its ideologue and chief intellectual heavyweight, Yogendra Yadav. Yadav’s affiliation with the radical left in India is not a secret, although it’s not exactly being shouted from the rooftops by the AAP nor for that matter being scrutinised by members of the media and other observers who may have an agenda of normalising AAP.

If you need to be convinced of Yadav’s radical leftist credentials, you need look no further than towards a kind of manifesto he wrote back in 1993 on what the left in India needed to do to reinvigorate itself. Among other ideas, Yadav crucially points to the future of socialism in India depending upon “drawing out hitherto ‘non-political’ sectors” within the political, socialist fold. This might involve for example roping in previously non-political social movements in support of the cause.

More than 20 years later, Yadav was able to put these words into practice. During the 2014 Lok Sabha election campaign, in which he contested from and lost from Gurgaon, Haryana, Yadavreportedly sought the support of “farmers’, tribal and fishermen’s movements”.

The brand of socialism that Yadav espouses is not the mild mannered democratic socialism we associate with Nehru but rather a much more genuinely radical ideology of the far left. But don’t take my word on it. In the same 1993 manifesto, Yadav writes:

For socialism is much more than a set of political positions, policies, programmes and conclusions; basically it is the name for a radical, emancipatory project which may take different forms in different contexts.

In India, the intellectual god father of this particular brand of radical leftism was Rammanohar Lohia, a one time associate of Gandhi and a major leftist political figure after independence. Yadav himself was influenced by Kishen Pattnayak, himself a disciple of Lohia, and has at length discussed his ideology here.

A Lohiate brand of far left radicalism was clearly on view during AAP’s 49 days in power, in which the state government evidently showed it had no interest in governing through the model of representative governance built in to the Indian political system but wanted to appeal directly to grassroots activists, volunteers and partisans as if they were still in opposition running for office.

The AAP’s 2015 manifesto ,which is largely a rehash of what they have said before, again is built around two key pieces of proposed legislation, the Delhi Jan Lokpal Bill and the Swaraj Bill.

The Lokpal Bill is a hold over from Anna Hazare’s India Against Corruption (IAC) movement and has been widely and justifiably criticised for attacking the symptoms and not the causes of corruption. Far more worrying is the Swaraj Bill, which aims to bypass if not subvert representative democracy by creating Mohalla Sabhas, which would be a collection of open assemblies of all adults in a particular small locality.

If AAP has its way, these unelected bodies not governed by any rules of parliamentary procedure would have the power to take decisions over resource allocation and to even monitor public institutions such as primary health care centers, schools and public distribution system shops within their locality. In keeping with its radical ideology, AAP claims that creating this new level of unelected government will increase “transparency and accountability”.

In fact, the opposite is true. Exactly to whom are these unelected bodies accountable? What would prevent a few local self-proclaimed leaders, either through money or muscle power, from capturing these local bodies? Exactly what checks and balances are there on their operation, functioning and funding? Ironically, these are exactly the elements which would lead to an increase, not a decrease, in corruption, which the AAP claims to oppose.

It’s fascinating that nowhere in the manifesto does AAP come clean on just how radical their ideological orientation really is, although it should not come as a surprise to anyone who cares to dig in to the intellectual leanings of its founders as we have just been doing.

If anything, the manifesto, like the short-lived AAP government last year, distracted media attention from the radical underpinnings of the party’s ideology by instead offering the kind of bonanza of populist handouts such as subsidised electricity, water etc of a type with which we should be very familiar.

AAP has refined the formula of populist giveaways by the Congress and other leftist parties by also offering giveaways not just to the poor but to the middle class. How else would one explain the promise of free Wi-Fi? Their rationale is that ready access to Wi-Fi would help a woman who’s being assaulted “reach out for help through a handheld device.” It’s hard to see how this would help someone poor who doesn’t have a smartphone.

The manifesto’s conclusion claims to offer “big change without big spending” but pointedly doesn’t tell us exactly how they would do that. But the very end of the manifesto does give a hint of their true belief system when they say a vote for AAP would be a vote for “participatory decision-making and elimination of private profit from public good.” These are nice code words for anarchical devolution of power and a dislike and distrust of markets and free enterprise.

Despite an evident effort to try to appear to be garden variety centre left populists, like the Congress, AAP is in reality built upon a radical and far left ideology which can be seen in the intellectual heritage still carried by its leaders and finds traces in their manifesto.

No one, not even the poor who supposedly are AAP’s natural constituency, would benefit from this strange hybrid of radical devolution and top down large scale populism. A party which fundamentally distrusts the institutions of representative democracy will inevitably destabilise those institutions, not strengthen them, exactly as we saw in AAP’s first innings.

Voters in Delhi need to go into the February 7th election with their eyes wide open. The consequences of handing the Aam Aadmi Party a majority are likely to be nothing short of disastrous.