IT’S ABOUT CHANGING MAPS, NOT GEOGRAPHY 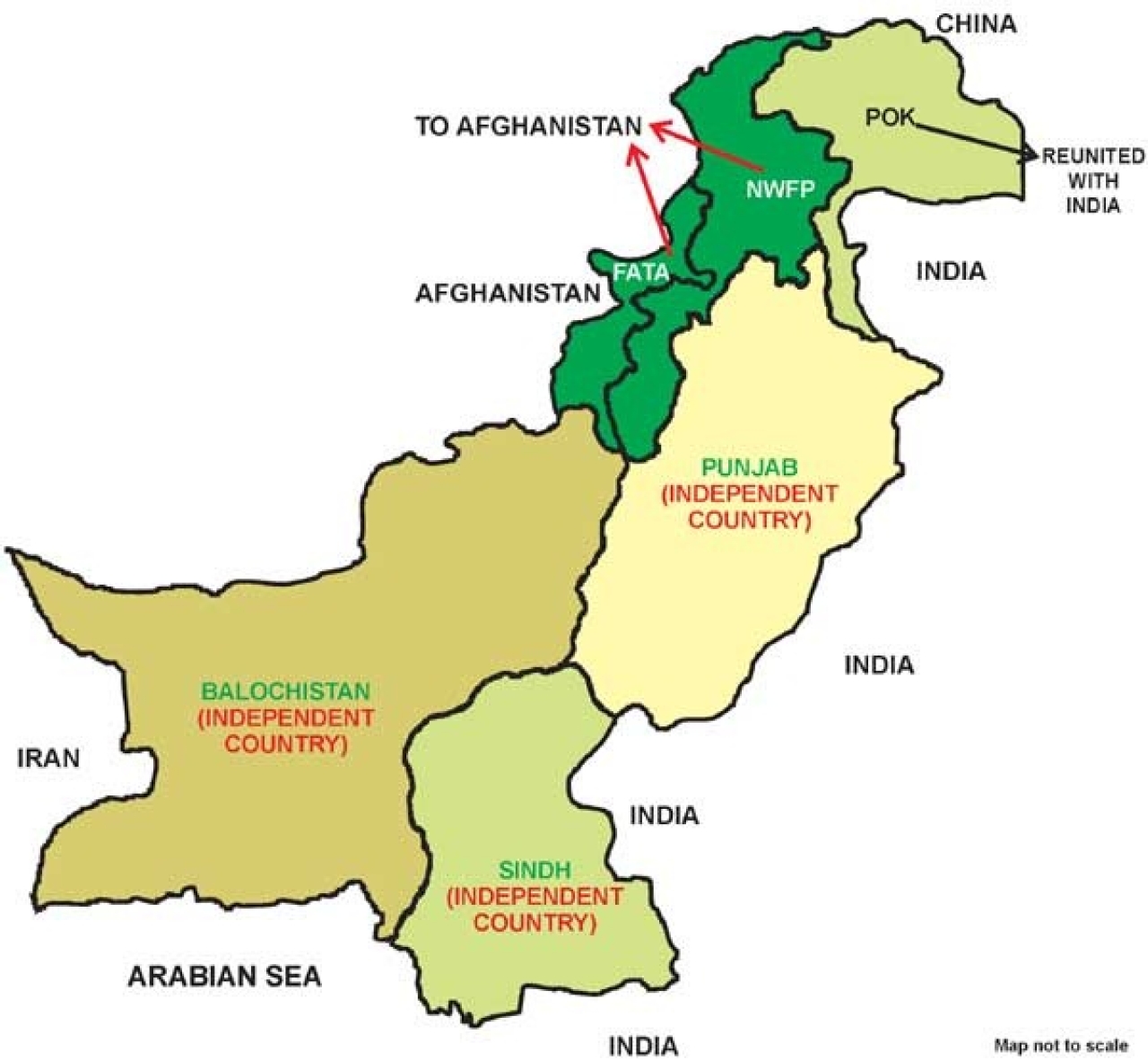 You cannot change geography. This is the mantra often chanted by Indian peaceniks to explain their embrace of and love for Pakistan, the logic being that since you cannot wish away the rogue, it is best to hug him and hope for the best. Some analysts go a step further: they believe India’s interest is best served by so strengthening democratic and liberal voices in Pakistan that they become powerful enough take on and defeat the military-jihadist combine that defines and runs the state.

This is akin to giving milk to a snake in the hope that once its body becomes bigger and stronger, it will act as an antidote to the venom it carries in its head and make the snake wholly non-poisonous. That, as even a shallow understanding of the history of the sub-continent coupled with commonsense will tell you, is unlikely to happen in such a smooth, civilised manner.

The metaphorical poison, we overlook, is not isolated in a tiny gland located in the ‘head’. The whole body, as it were, save the small portions that we conveniently choose to highlight, is toxic, and the levels are rising rapidly.

We also make the cardinal mistake of not seeing ourselves through Pakistan’s religion-tinted eyes. Only that counts. Not our flattering, self-deceiving self-view applauded by liberals there who carry no weight or influence, and exploited with glee by Pakistani generals who take all key decisions.

Consider this: history as taught to children in Pakistani schools is designed to generate hatred towards India. Little is taught about Pakistan’s long pre-Islamic history; the focus is on the glories of Islam and Mughal rule in India. As per a detailed study carried out by the Sustainable Policy Development Institution (SDPI) of Pakistan, history text books “are “full” of material “encouraging or justifying discrimination against women, religious and ethnic minorities and other nations,” and four themes emerge from the curricula: 1. Pakistan is for Muslims alone; 2. Islamic teachings, including a compulsory reading and memorization of Qur’an, are to be included in all the subjects, hence to be forcibly taught to all the students, whatever their faith; 3. Ideology of Pakistan is to be internalized as faith, and hate is to be created against Hindus and India; 4. Students are to be urged to take the path of Jihad and Shahadat.”

Now this is not the handiwork of Mullahs steeped in Wahhabi or Deobandi inspired intolerance. This is the deliberate creation of educated Pakistanis who believe that their nation has to be defined by Islam, sustained by implacable hatred towards India and kept energised by the objective of claiming Kashmir and the rest of India in the name of Islam. It is easy to blame the Pakistani military establishment, particularly Zia-ul-Haq, for this slide into violent extremism. But, one would do well to remember that almost the entire Pakistani elite, including its civilian political leadership, is equally responsible for shaping Pakistan into the dangerous disaster that it has become today. According to some reports, in 2010 Pakistan was producing 10,000 potential jihadis annually out of 500,000 graduates from 11,000 madrassas. The numbers would have only increased since then.

These nurseries have not sprung up on their own. They have been assiduously planted and nurtured to provide extremely motivated fodder to the establishment in the furtherance of its strategic objectives. It is only natural that some such elements have turned upon Ahmediyas and Shias, after having brutally all but cleansed Pakistan of religious minorities, and signalled their determination to turn the whole state into the kind of Islamic Utopia that Osama bin Laden and the Taliban – trained and controlled by the military — had created in Afghanistan before 9/11.

If we look at non-sanitised Mughal history, the reins of two emperors stand out.

Akbar and Aurangzeb both ruled for about 50 years each. During Akbar’s time there was communal harmony and peace. Around this period the Bhakti movement also flourished, with the likes of Guru Nanak, Kabir, Chaitanya Mahaprabhu etc., preaching love and devotion for God, violence nowhere in their teachings. Guru Nanak even tried to establish a spiritual bridge between Hindus and Muslims. Aurangzeb, on the other hand, abandoned the liberal religious views of his illustrious great grandfather and attempted to impose Sharia law with the aim of converting India into a land of Islam. Destruction of temples, forcible conversion of Hindus, imposition of jazia on them, blanket ban on music etc. followed, as did many wars to expand the empire. It was on his orders that Sikh Guru Teg Bahadur was beheaded in Chandni Chowk, after being mercilessly tortured, for refusing to convert to Islam. It was primarily Aurangzeb’s atrocities that inspired Guru Gobind Singh, the Tenth Sikh Guru, to turn lambs into lions – the Khalsa – and change the course of history.

Pakistan sees itself as the modern day Aurangzeb with ambitions that exceed his. This Aurangzeb has a problem not just with Hindu India but with the entire non-Muslim world. It honestly believes that a few nukes, an Army and thousands of brainwashed and armed young boys guided by what many Muslims say is a misinterpretation of Islam, can achieve more than Aurangzeb ever could. This belief has been strengthened by the fact that a much bigger and united India has not been able to do to it what was eventually done to Aurangzeb’s empire by much smaller kings, all acting on their own.

Secular India can be said to be in Akbar’s mould, overlaid by a pathological faith in Gandhian non-violence that worked against the British but was a spectacular failure against Jinnah’s ‘Aurangzebian’ call for Direct Action in 1946.

Akbar’s Pakistan is an impossibility; it would, in fact, not have been carved out of India in the first place had the great emperor got into the DNA of Muslim leaders. Yet, India continues to fool itself that Pakistan will become such a state if its democratic institutions are strengthened. This belief, as we have seen, is based on the erroneous premise that the fundamentalist lobby in Pakistan is a tiny fringe. As Zia-ul-Haq, the brain behind Pakistan’s rapid radicalisation famously said, without Islam Pakistan would be just India. That is precisely what it did not and does not want to be. In Thomas Friedman’s words, Pakistan exists only to be not (Hindu) India. That is one reason why even though most Muslims are of Hindu descent, almost every single one claims Arab, not Indian, ancestry.

Since a Pakistan driven by values that Akbar embodied simply cannot emerge of its own volition from the ‘poison’ that it has consumed and carries in its head, a strong Pakistan that mirrors the ideology and methods employed by Aurangzeb can be nothing but bad news for India.

But there are powerful voices in India who do not want Pakistan and, thereby, the idea behind it, to be defeated. Some, in fact, want to strengthen it as they derive their own strength and bargaining power from the strength of that country. If there is no Pakistan, those who created it out of thin air will begin to look like small, obdurate men who were unable to stop living in the past, in another century and world. Even worse, those in Pakistan who are now trying to sustain it in that mould will show up for what they really are: men fit to rule in an ignorant 17th century, not an aware, connected 21st. Not the kind who will meekly submit to such a body blow sitting across the table.

Warnings that if Pakistan breaks up India will have to contend with fiver rogue states — and uncontrollable armed Talibanis will stream into and wreak havoc in India — are completely unfounded, if not mischievous. Deprived of funding and the patronage, protection and guidance of a powerful state hostile to India, all these radical groups will quickly dissolve into the countryside, just as similar elements did after the death of Aurangzeb.

Even Pakistan knows geography cannot be changed. But it has not forgotten that maps can be, and have been all through history. It’s own was, in 1971. It remains pathologically obsessed with changing India’s map — a thousand years’ war, a thousand cuts. A destructive, violent, even barbaric, energy is at work, ceaselessly. That is why you will never hear Pakistan say that a strong, stable India is in its interest. How, then, can the reverse be true?

You cannot shake hands with someone whose fist is closed. Five fingers, separated, cannot deliver a punch. India has to prise open the clenched fist.